The Nightmare of The People Under the Stairs

Why do I like The People Under the Stairs? It's not a particularly great film-- far from it in fact. And yet, I continue to revisit it time and time again only to be generally repulsed and feel in need of a shower. I first heard of the film from a friend of mine who recounted that this movie scared the crap out of her. We're talking back in the days of being a young one I should add. Some time later when exploring the vast world of horror movies, I happened upon it On Demand. While I knew what my friend had meant when she said it scared her, I couldn't help but notice that the film was scaring me for different reasons. Yes the "mother" and "father" were insanely terrifying, and the actual people under the stairs would probably have left me feeling uneasy had I been a bit younger. 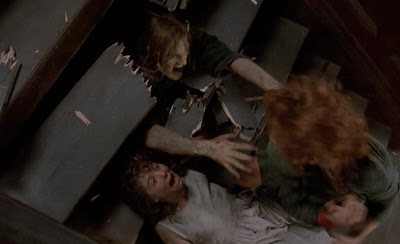 What I couldn't seem to shake however was the constant feeling that the film was invoking one of the strongest connections to a nightmare that I've ever experienced.
Here is a nightmare I have had several times. I'm trapped in some place, I'm filled with a deep sense of dread and I cannot escape or wake up. I'm sure we've all had similar nightmares before and yet to me The People Under the Stairs exemplifies those same exact feelings that I have in those dreams. It could be my strange fascination and fear of extra rooms round beyond the visible means of the house, the labyrinth like system of the space between the walls, or perhaps even the decay and derelict nature of the house itself. Whatever it is--it manages to unnerve me in the strangest of ways.
Aside from all the silliness, the strange decision to don an S&M suit while using your shotgun, 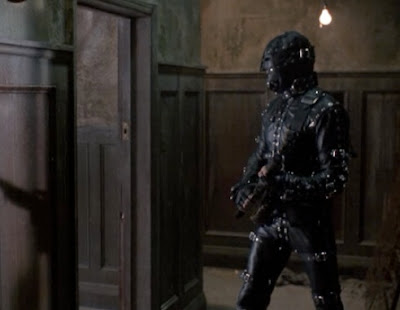 and the entirely too long of a running time, The People Under the Stairs still has something that's difficult to touch. I like to think of it as some kind of evil and twisted fairy tale. Darker even than how the fairy tales were supposed to be--perhaps even a mirror image, the evil twin of something that was already a bit creepy to begin with. 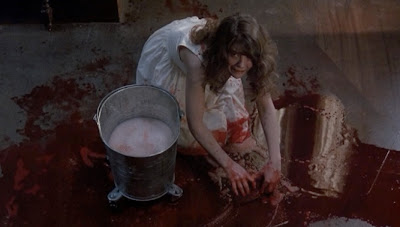 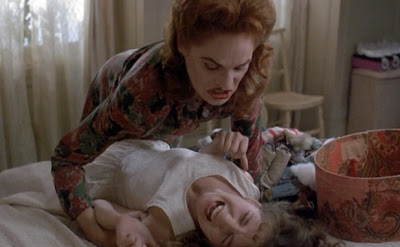 Not only that, the film is gory and isn't afraid of it. There is nothing glamorous or romantic, and there is no pointless cameo of boobs. What you see is a strange hybrid of filth and comedy--of cheese and suspense--of nightmare and of intrigue. 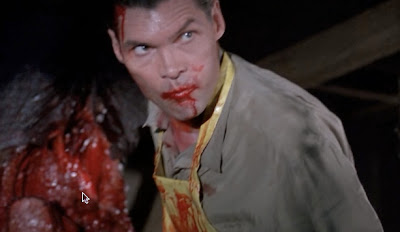 The People Under the Stairs has its fair share of problems, heck, I'm pretty sure it's a terrible movie, but I will keep watching it because I feel like I have to. There's something to be said about it's nightmarish atmosphere and the feeling of being trapped in a place that is too terrible even for the mind to comprehend. The kind of place that makes you feel sick and ashamed--the kind of nightmare that's too real to wake up from.
This weekend, the Coolidge Corner Theater continues their Nightmares on Harvard Street special program, featuring the films of Wes Craven. This Friday and Saturday at Midnight, The People Under the Stairs will be playing. For more info and this month's schedule click here or visit Coolidge Corner Theater'sWebsite.
Posted by Andre Dumas at 5:20 PM

I think part of why I still like TPUtS (even though overall, I'm not generally a huge Craven fan) is how it sets up its protagonist as a good-hearted ghetto kid fighting the mean right white slumlords. There's a great fairy tale-ness to it that works incredibly well, right down to the 'parents' being siblings constantly adopting children to find the perfect one. Still a flawed film, but filled with a lot of great things inside.

Plus, the "Aarwon Buwww" Got Milk guy as Roach, the sister who survived both Freddy V and Popcorn, the crazy neighbor lady from Prancer, VIng Rhames in a beanie, and A.J. Langer!

You hit the nail on the head.

More then anything this feels like the hard R Never Ending Story.

I think People Under the Stairs gets a lot of things right, even though it shouldn't.

What is up with this flick?

The basement scenes are killer!

i always wondered why the people lived there. did they just not want to pay rent or what? such a weird movie. i never go into a house with more than one story or a basement or even a sunken living room.

Very interesting. We always rented this movie as kids because it was scary, but not too scary. I guess we thought we were bad-asses.