Critters: I Prefer More Billy Zane With My Critters 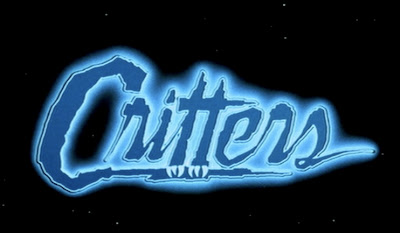 If you remember my review of C.H.U.D I had been sadly misinformed by... myself that C.H.U.D contained the creatures known as Critters. Apparently I mixed up the box covers in my head--sue me. As it turns out, C.H.U.D. is a delightful movie compared to Critters, although the actual Critters are better looking than those pesky Cannibalistic Humanoid Underground Dwellers are. As an entire film however, Critters is kind of boring.
Here are 5 omens that warned me of the impending doom concerning my viewing of Critters.
#1. Finding out that Johnny Steele was not a real singer. 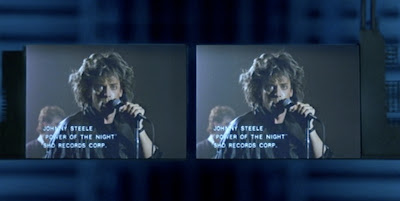 Having not recognized Terrance Mann in anything, I was just about ready to search Ebay for a Johnny Steele poster to put in my bedroom (on the ceiling). I was so excited when the TV recording of Johnny's performance turned into the REAL THING that I smiled really big and became hypnotized by the fog and laser light show. 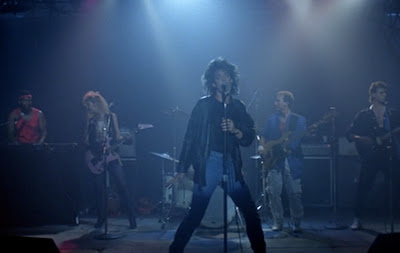 But then that alien bounty hunter morphed into him and I knew, I knew my dreams had been dashed. Unless we're dealing with Jon Bon Jovi, a stud muffin rock star will just not be able to act you know, good and stuff.
#2. Billy Zane's character died too quickly. 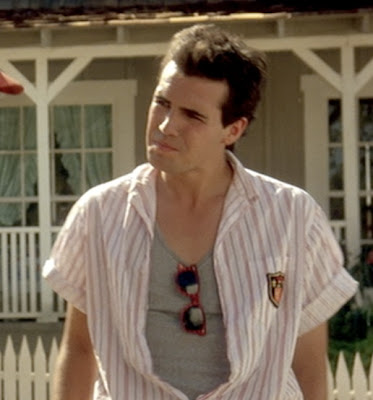 Hopefully most of you realize that the less time that Billy Zane is in a movie, the sadder the earth becomes. I'm not sure why this is, but I'm pretty sure it's been proven at least 3 times at Harvard. I think it has to do with his dreamy face but I'm not sure. In any case, I was all excited to see Billy and then all unexcited to see him get his stomach eaten by a Critter.
#3 The Critters remind me of the California Raisins 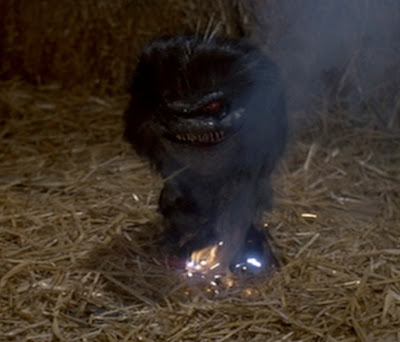 For reasons as yet unexplained, I really detest the California Raisins.

In elementary school my best friend had California Raisin bed sheets and they used to make me physically ill. I would fantasize about destroying them and then fly away on a magical bicycle pump that transported me to a glorious rainbow. Wait...that was a different dream. Anyways, the Critters are pretty frickin cool looking, but because their thick fur/head of hair reminds me of the California Raisins, I get physically ill. Apparently the California Raisins do not have hair. I must be confusing them with James Brown. 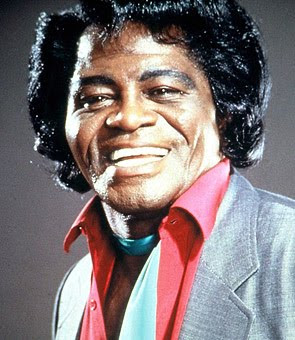 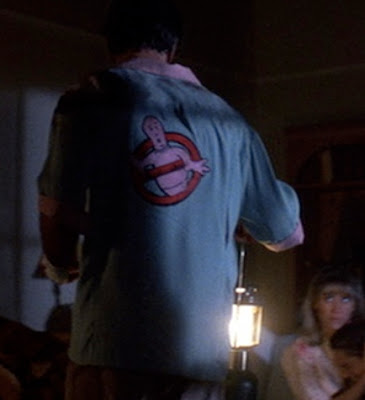 Besides being stupid, the bowling team's logo of Pinbusters makes my mind wander to the beautiful day I had yesterday basking in the gloriousness that is--Ghostbusters. Long story short, I wish I was watching Ghostbusters instead of Critters. 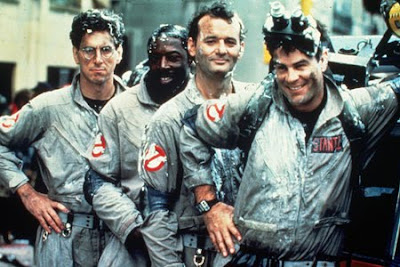 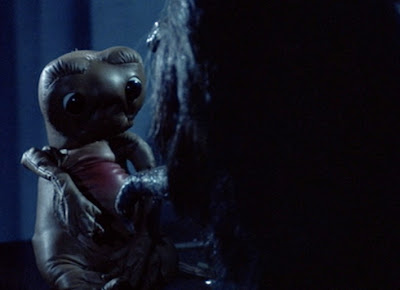 Seriously, the worst representation of E.T. that I have ever seen. My cat can draw a better picture of E.T. with her butt. Which brings up a good point, is this really supposed to be E.T.? I don't remember him having eyebrows.
Okay so I was doomed from the get go practically. As much as I wanted to love Critters for its likeliness to Gremlins and because I confused it with C.H.U.D--it just wasn't in the cards. It is an interesting spin on the home invasion scenario but for the most part I found myself yawning on more than one occasion. The bulk of the matter is, that the Critters don't get enough screen time, and by screen time I mean moments of subtitled amazingness. More Critters! That's all this film really needs (and more Billy Zane obvs). I felt like way too much (boring) time was spent on the (boring) family in (boring) Kansas. It took quite a long time for any action to happen and I found myself just getting more and more tired of it.
Oh right you may want to know what it is about. Well, some Critters (or Krites I guess is what they're called...I will continue to call them Critters. I mean the film isn't called Kritters is it?) break out of space prison and land in Kansas on a dumb farm . Bounty hunters are after them and the Critters pester a boring family and their cat. Thankfully the cat makes it out alive. SPOILER ALERT Billy Zane does not.
Where was I? Oh yes. So, while I did appreciate how the Critters rolled around, and how awesome they looked barring there million rows of pointed teeth, I was just kind of underwhelmed after a while. It's fun the first few times a Critter latches itself onto an unsuspecting person, but then it just becomes the same old thing. Sure, Dee Wallace Stone toting a shotgun is pretty neat, but running out of ammo so quickly is not. There's a lot of that in fact--something awesome and then that awesome gets quickly dashed. What's up with that? I want awesome all the time okay?
I guess I just can't find too much to love about Critters. I like Gremlins better. I even like Gremlins 2 better. And I definitely like C.H.U.D better. Love the Critters in general but your movie? Well it kind of stinks. I would however like a Critters stuffed animal for my birthday. That is all.
Posted by Andre Dumas at 7:36 PM

1. Your Harvardian theory on Billy Zaneness is 100% correct. The man is awesome.

2. I was a huge California Raisins fan back in the day, but I can understand one's disgust. Raisins are sticky and oddly shaped. The idea of one blown up and wearing lipstick is unsettling.

3. Most importantly, Terrence Mann is The Shit. I of course say this as a musical fan: he was Zach's loyal assistant in the film adaptaiton of A Chorus Line, the original Beast in Beauty & the Beast on Broadway, and, most importantly, the original Javert in Les Miserables. So don't fuck with the Mann.

So wait a second, you don't like the California Raisins? My god the humanity!

It hurt me so much when they killed off Billy Zane, but he sure proved to all of them that he could survive longer in a film by starring in DEMON KNIGHT!

I'm pretty sure that's an actual ET doll from the 1980s. Don't knock the movie over that decade's shoddy ET merchandise.

Hahaha awesome post! You can't get any better then Billy Zane. I always thought Critters looked dumb and this review confirmed it.

The Zane gets no respect. No respect.

I haven't seen this film in over 15 years. It could use a rewatch. Great post. And I had no idea anyone was disgusted by the California Raisins. I can sort of understand where you're coming from there. They are kind of creepy.

I must agree to disagree with your assessment of the glory that is Critters. Despite the fact that I am viewing it through the rosy glasses of nostalgia, I can attest to the fact that it still has the power to enrapture nine year old boys the Parish over (I'm from Louisiana BTW). Those killer tumble weeds were a ficture of my childhood and I hold them near and dear.

FYI: that is indeed supposed to be E.T. In fact that is an E.T. doll from the 1980s that was widely available to consumers and teir kiddies. They were sorta kinda soft but had this really weird almost sticky vinyl skin. I frickin' hated them.

And Emily is 100% correct. Terrence Mann is the shit!

Haha real E.T. doll or not, Critters still put me to sleep. Sorry guys and gals.

If you're needing another Zane fix Andre, make sure and check him out in "The Mad", a pretty stupid low budget zombie flick from a few years ago. While it's not better than Critters (sorry, I love those little hairballs), it's 100% California Raisin (and for that matter, James Brown) free!

Funny post. I've been a bit of a Critters fan myself. The film has it's problems as you have pointed out, but I really love the idea of the Critters and their design. Being a fan of VS monster movies, I could put some dollars down for a Gremlins vs Critters flick. When I was a kid I dreamed such a flick would be made. Hell even know I'd welcome that compared to the remakes they keep kicking out.

I used to have a California Raisins tape and I used to listen to that shit like it was going out of style! Their version of "Mony Mony" was to die for. I was like 8, mind you.

I do very much agree about Zane, in fact, I think it's inZane that he isn't in more decent movies nowadays. I must mention that I do love his little rat braid that he rocks in Critters. Makes him look like a stallion.

As for Critters, I fucking love it, but I always have, and it was one of the early horror films I had gotten into when I was maturing. Not down there, but as a horror fan. Perv. It doesn't even seem like you dislike the film that much, and your complaints are valid, and I also couldn't agree with you more that Gremlins 1 and 2 are far superior.

Hahah oh gawd I can't believe I forgot to mention the rat braid!!!