Absentia: The Review Where I Tell You NOTHING About the Movie. 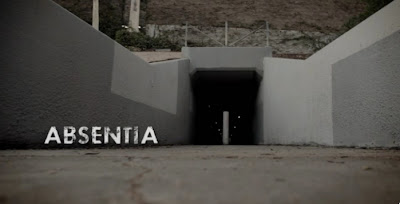 You know those movies that people always tell you to watch but they won't tell you why? The ones that apparently hold some grain of wisdom so large and powerful that knowing anything about it beforehand might significantly ruin your chances of actually taking something away from it? Absentia is one of those movies which makes me severely question the necessity of writing about it.
I finished watching Absentia this morning after turning it off the night before in the fear of being woken up in the middle of the night by strange bug noises. Don't look at me like that I had the house to myself! Upon completion, my mind was suddenly filled with the kind of panic that only a horror movie blogger could have---what the hell am I going to write about?
Hence this incredibly pointless blog post where I try to convince you to see Absentia without actually telling you anything about it. Although I'm fairly certain that I've said too much already.
So here's the deal. If you enjoy watching movies that aren't straightforward in their apparent horror gene and if you like feeling really unsettled for no reason then you should definitely watch Absentia. It's a horror movie unlike any that I've seen. It made me feel so unbelievably tense, confused, scared and hopeless. It made me question the very idea of horror movies in the first place and most importantly it made me realize yet again that Doug Jones is probably some kind of alien from planet creepy face and body.
It's not even like there is this crazy overdose of jump scares or shock either. The tension that you feel amounts from extremely simple concepts that do just enough to send tiny shivers down your spine. The movie also utilizes the idea that a structure or piece of scenery can be one of the scariest characters out of the whole story. And most importantly it plays with the idea of loss, devastation and puppies in trash bags.....wait I mean....of drawing your own conclusions.
There are no answers in Absentia. For many this will be the hardest thing to swallow and perhaps for some people this will be the biggest fault of the film. Those people suck. No they do, they really do. Because if Absentia teaches us anything, it's that there will never be an end to what we imagine. What does it all mean? It means whatever you want it to mean. No seriously, what does it mean? SHUT UP. Just watch it. You'll thank me later.
Posted by Andre Dumas at 4:16 PM

Yes, I totally agree, and I just watched ABSENTIA last week without, just as you say, knowing anything about it. It was fantastic! The most satisfying horror film I've seen in ages.

I thought the movie was terrible...

I love horror movies, and this movie was a movie about nothing. It's about a girl who is doing heroin and hallucinating a bug and a guy who is in a tunnel that is not scary at all, suddenly comes back when his pregnant wife decides to go on a date finally after 7 years. Wow....

the movie was terrible. A movie about a hallucinating girl who sees a bug and a guy who is in a tunnel that mysteriously comes back after his pregnant wife finally decides to go on a date after 7 years of him being gone... the movie is about nothing, was one of the worst movies I have ever seen

I'm sad ass has no pic. I love a good ass pic.
I'ma watch this ish. I'm kind of on the fence about movies with no clear answers. Sometimes I love Lynch films, and sometimes I just want to throttle him and ask, "what the fuck is a tiny person behind a diner supposed to fucking mean?!"

Absentia is tied with Gregg Holtgrewe's Dawning for favorite horror film of 2011. Amazingly unsettling, creepy stuff. And moving and heart wrenching to boot!

Glad to read another review for Absentia. It's a good film that people need to look for.
JB

Glad to read your review. It's such a pleasure to watch a horror movie that's smart, character driven and, of course, scary.
JB

I liked this one a lot too -- some solid acting (although some pretty bad as well), a clever script that keeps everything nicely ambiguous without making that a frustrating experience, and for once, a filmmaker that knows how to use CGI in subtle ways to just keep the viewer off kilter. It's not, like, the best thing I've ever seen, but they used their limited resources well and kept me guessing and creeped out the whole way through (and a bit longer, which doesn't happen much anymore -- hey, I'm old, and I've been a horror movie fan a long time, so very little gets to me or sticks with me).

Is there going to be a part 2

I agree with your opinion. This was a great film.

Agree. So much awesome/creepy going on, but so little to say. I really liked it.

Just saw this last night. For the first time in decades,(I'm old too) I was afraid to turn out the lights when going to bed. I woke several times listening for noises and had this creepy unsettled feeling until morning. Not easy to do to me! Subtle, building plot, solid acting and an inevitably helpless atmosphere contributed to a great movie. Brilliant horrific twist on the "trade" at the end meant all was lost. Man, I did not see it coming! Well done!

Any movie that does not offer some sort of conclusion is terrible. An hour and a half of no answers. Use my imagination? I'll do that it's cheaper.

This movie SUCKS bigtime, i dont understand the storyline, in short i dont get it, what is it all about, its about bugs or something, wasted my time to watched this movie.

This movie was scary as fuck

SPOILER ALERT:
I actually thought that the monster was really a metaphor for the younger sister and that she was the one that was doing all of the killings while on acid trips. I further felt solidified by this when she left all of those clues for the detective sin the envelope. One might look at it in a way of her asking them to find the creature, but I look at in a way of her ocnfessing to what she did throughout the years to various people. Also, the fact that you see the younger sister at the last shot with the creature’s tentacle on her makes me think that she had a split personality and the creature exists in her mind.