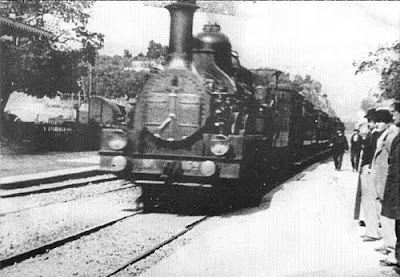 One of the sites that was most important to me while building up my Netflix queue, was a website called Scariest Movie Moments and Scenes. This is the perfect site for anyone that feels Bravo's original list is inadequate for gaging true scary moments in the horror genre. If you have some free time, you'll instantly be sucked into taking a look at some truly great moments, and even finding some that you never heard of.
I've been to this site more times than I can count and every single time I am blown away by one of the moments. This is of course, L'Arrivee D'un Train en Gare de La Ciotat or Arrival of a Train at La Cioat or even more simply--Train Pulling Into Station. As the story goes, this film--a 50 second black and white silent documentary from 1895, is responsible for sending an entire room of viewers screaming and running for cover at the back of the theater. The cause? The train pulling into the station looked so real, that the audience thought the train was real and coming right for them.
After doing some research I've found that this story is actually considered an urban legend in the movie world. Some critics doubt that the film looked that real to the audience and caused them that much fear---but do agree the film was sure to have astonished many, especially those who had not seen a lot of a films. Moving pictures were still in their early stages of life- and I'm sure there were many people in that audience who had never seen a moving picture to begin with.
However something a little more interesting has struck my attention and made me laugh, given today's trending movie magic skill. The Lumiere Brothers who directed and produced the film, were actually trying to achieve a 3D image before the film was ever shown to anyone. After the film was shown, Louis Lumiere went back and re-shot the film using a stereoscopic camera and then showed it again to an audience. It is very possible then--that this urban legend of the audience's reaction was actually extremely warranted. As 3D was different and unexpected--and I'm sure did actually look like the train was coming right at them. Was it then possible that the audience reaction was the reaction during the 3D showing and not the original showing? Could be, could be.
Although neither theory has been proven, this little 50 second film has continued to plague my mind with interest for months. Whenever I hear people speak of first instances of horror and what was actually THE first horror movie--I always think about L'Arrivee and wonder if maybe, just maybe, this was our true first instance where what was happening on screen had the power to elicit a true physical and emotional response from the unsuspecting audience.
Posted by Andre Dumas at 6:02 PM

Yes! I do believe this story is true. The first modern movie theater set up shop in France in 1895, and up till then people had only seen movies in much more intimate settings like nickelodeons. Also, as you said, the whole concept of motion picture was only a handful of years old anyway, so these folks probably were pretty shaken up.

Interestingly, I think it's George Melie's silent short The Devil's Castle, made the following year, that usually gets the credit as the first actual horror movie.

Dude, it's like when Gonzo would open the closet on Muppet Babies.

Great post. A short while back, I posted a series of 'sneak peeks' for a series I'm working on called "The Horror Explorer", and I touched on this film, and how it was probably the first 'horrifying' film, if not the first 'horror' film.

B-Sol is also correct in stating that Georges Méliès is often credited with the first horror film, although many modern genre fans will have difficulty viewing his short subjects in this context. They utilized horror-related imagery, but seemed aimed more for humor and to amaze the viewers with their special effects than to actually scare the audience.

Fascinating stuff guys! I know very little about early early history of film especially the "first" horror film and what all the debates are about. Someday when I'm feeling particularly nerdy I'll do a lot of research and maybe make a timeline. Maybe.