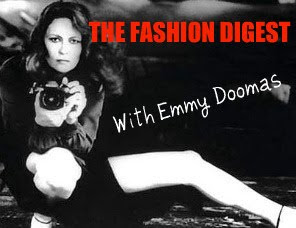 For many people, summer is one of the scariest seasons of the year. This is due of course to the ever menacing stare of last year's bathing suit you have crumpled up in your dresser drawer. For other, smarter people like me, summer is the scariest season of the year due to the ever menacing presence of sharks. I'll let you decide what is the bigger threat. In honor of bathing suit season, Emmy Doomas and I have resurrected the Fashion Digest to update some of our favorite horror movie swimsuits. Behold the vast array of decent people wearing some indecent suits. Well I guess not everyone is decent...*cough* Sarah Michelle Gellar.. just kidding! Sort of.
SUSPIRIA 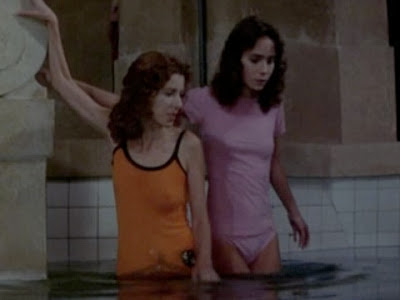 We'll begin with our two favorite ballet students as they make their entrance into the most delightful swimming pool this side of Germany. I'll try to refrain from talking about the gloriousness of such a scene but it will be difficult. I really had no idea that Suzy was a surfer girl though. It looks like she's wearing a wetsuit pulled right off the little girl's department at Marshall's. And don't even get me started on oranGINA (pronounced with emphasis on gina like VAGINA) over there. Let's just say that if the Demon needed a reason to kill Sarah--this swim suit was his inspiration.

I feel like lately the world has recently embarked on an exhibition of half-assness. Why wear full pants, when you can rock capris? Why wear a full shirt when you can rock a baby doll tee? Why rock either long or short hair, when you have the satisfaction of both in a mullet?! It’s like we can’t have either chocolate or vanilla, but we must always have a twist. Along those lines, the world was introduced to the tankini in the late 90s. Perfect for those who want the coverage of a one piece, yet can’t bear to say they bought one, thus along comes a meshing of words and a whole new trend! I don’t mind tankinis in the least, whatever floats your boat, as they say. But I prefer tankinis that mix it up a little, ergo the problem I have with the girl in Suspiria. Why not just get a pink one piece if you going to have the same color top and bottom? Never mind, I have yet to see a tankini that is not a tank. What’s with the short sleeves? Looking further into this it looks like she just got lazy and bought a pink t-shirt and matching granny panties. Wait, is this even a bathing suit?!!! If you’re going the tankini route, I suggest mixing your patterns. How cool is this little number from Macys? Ruffles, a meshing of not two, but THREE prints (polka dots and stripes, need I say more) and a cute stringy bottom and v-neck to boot. Just because you don’t want to show your stomach doesn’t mean you have to look like a frumpy beached whale! 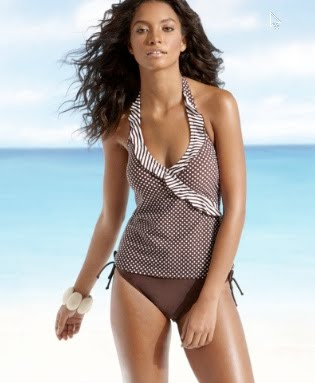 Tankini’s sidekick’s choice of swim-wear is also pretty cringe inducing. Is she a huge Bengals fan or perhaps normally enjoys wearing the festive colors of Halloween? Sick. If you’re going to go two-tone, I would first drop the piping. By now, it’s too 80s, and not in a good way. You can go 80’s inspired and still look hot. Check out this two-toned suit from American Apparel. First of all, the colors are kick-ass. My favorite---cobalt and serpent. While this looks a biiiiiit high cut (call your Brazilian waxologist ASAP), people will at least start confusing you with Pamela Anderson, and that ain’t too shabby! 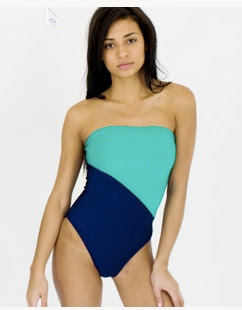 I KNOW WHAT YOU DID LAST SUMMER 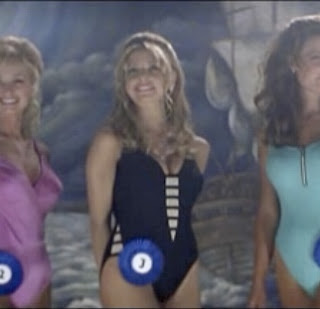 I happen to be one of the last people on this earth who does not love Sarah Michelle Gellar. I admit I was never a big Buffy the Vampire Slayer fan and I'll also admit that I was a bigger fan of Buffy the Vampire Slayer the movie...what? It has Hilary Swank in it..helllooo she won an Oscar one time? But anyways, Helen here in I Know What You Did Last Summer chooses a very interesting selection in her quest to become Miss Old Fisherman's Village Mermaid or whatever that pageant was called. Alright she's hot I admit it, but really--who can get away with a suit like this? That's right. Nobody.

A big trend for this year is the monokini. For all of you out of the fashion loop, a monokini is basically a one piece bikini. In laymen’s terms, let me see how many holes I can cut into this suit before I look too ridiculous! When I first saw them coming back to life, my first thought was A. how many more hybrid bathing suits can we possibly endure!!! and B. WORST TAN LINE IN THE WORLD. Alas, if we’re talking about updating classic horror bathing suit styles, than I think Sarah Michelle here really should have rocked the monokini. Basically, if you cut out those disaster white crosshatched pieces, you would have a modified monokini (yes, alliteration!). Face it—a monokini is hot. Though they slightly remind me of a bathing suit I rocked circa 1990. Who else remembers the days when as a young girl, your Mom refused to let you look like an 8 year old slut and wouldn’t let you buy a bikini, but sprung for the bathing suit with a huge hole where the stomach area should be? Mine was black, with neon piping and nautical symbols puffy painted all over it. Basically bikini training wheels if you will. And yes, I had an AWESOME tan line. 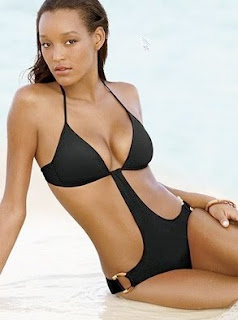 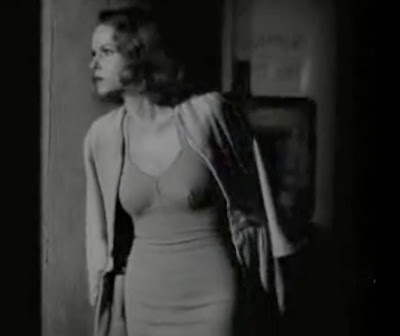 It took me awhile to convince Emmy Doomas that Jane Randolph here in Cat People was actually wearing a swimsuit and not a dress. Since I love Cat People and know that she is in fact wearing a swimsuit when a panther/cat/person growls from the shadows, this was clearly a battle I would win. And also I can prove it with this action shot: 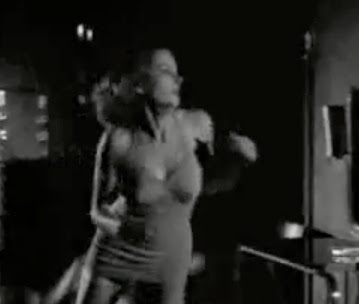 I for one, adore the vintage style found so prominently today and happen to own my very own vintage style swimsuit. Unfortunately due to my fear of sharks, this swimsuit is seldom seen. But anywho. What better way to escape a panther/cat/person than by wearing a sassy little vintage number from the 1940s?

Grandma… Why are your boobs so pointy??

As Andre will be happy to tell you, I am obsessed with vintage. Any clothing, music, behaviors that occurred from the 1920-1960s—I’m there. Thankfully, vintage bathing suits are coming back in a big way. What I really like about these styles, is that designers made very few changes. They originals were so nice and classy, why ruin a good thing? The suit worn by the woman from Cat People, at first looked like a dress to me. A tight one, but it looked almost too long to be a bathing suit. I found very similar ones in JCrew, though they have shortened them just a bit, so no one will get confused and bust out their bathing suit at work or anything. Also a big change here is the lack of cone boobs. One thing I don’t miss from the 1950s/60s; bras that will poke a man’s eye out! Who ever thought that was a good idea? Whose breasts are that pointy?!?!! I feel like once women took over bra designing it was a whole new ball game. Thank you feminist revolution!! 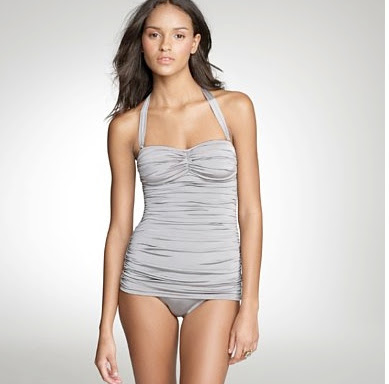 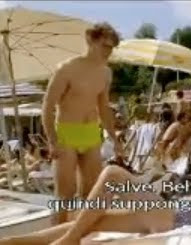 Ooooh banana hammocks! Even though The Talented Mr. Ripley isn't considered a horror film, one can argue that Matt Damon's neon green briefs here are quite terrifying. Let's cut to the chase---it looks like a diaper. Now I heard somewhere that this style was possibly coming back except improved. To be honest I'm not quite sure where I stand on that issue except to say that I'll think Daniel Craig is attractive in any bathing suit. What? Horror? Oh right. Ummm the floor is yours Emmy.

Not that I ever wish I were a man, but definitely not when it comes to bathing suit shopping! What a nightmare. Nowadays, you have about one style to choose from. Even if you wanted to sport a banana hammock, where do they sell those babies? Dicky Greenleaf chose a fine suit here—aside from the neon yellow; who knew that color even existed back then—this was a super huge trend back in the day. Look at this cool vintage shot I found of a guy on the beach in the 1930s! 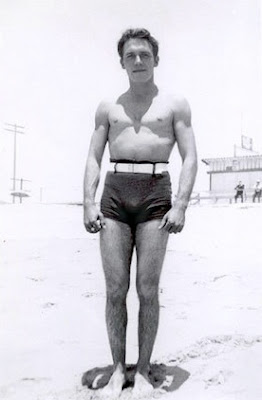 Love the high waist and ooo a belt! Also, the um, shall we say bulge factor. After the surfing revolution, guys are reduced to board shorts or if they are really brave---speedos. And we all know who rocks speedos now. It’s never the guys you want to be wearing them---it’s your fat old men with nothing to lose, except 100 lbs, their chia pet back hair, and that cheese-dog in their hand.So I’ve picked two options for men this time around. This one for the daring, Dicky Greenleaf lovers. 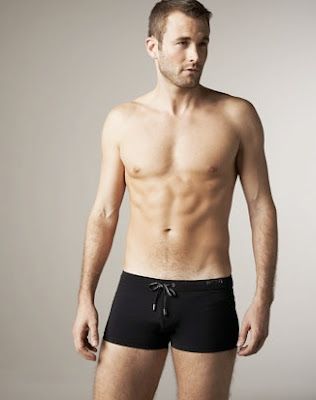 It’s more modern material, a bit short and tight, but HOT. Plus the model looks like an Irish guy I hooked up with two summers ago. Also, here’s one board short option, in which I love the print. 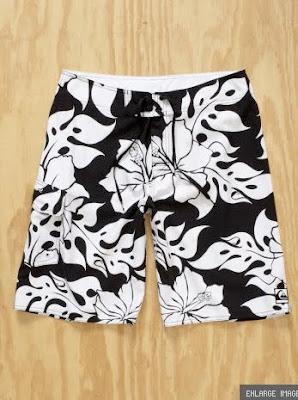 (mostly because its black and white!)
Posted by Andre Dumas at 5:04 PM

I just came across this blog and found it very interesting indeed.Thanks for sharing.

Score one for meaningless Pedantry!!!

But since you included Cat People you still win at the end.

Nice call on Matt Damon showing off his Ben Affleck in those ghastly trunks. Ugh.