Can I Get a Mummy Renaissance? I keep telling myself that I have to keep up with the classic horror films. Just like my sister tells herself that reading the classics is something she must do. Just like all of us feel that because something is so old, it has to be brilliant and in turn---a masterpiece. But why don't more people address the fact that just because a movie is old, doesn't mean it's necessarily a great film?
Sometimes I think about 70 years into the future and the possibility that kids then will think that "old" movies are all highly regarded as masterpieces. Will we see intellectual types touting Wild Things as a landmark in psycho sexual thrillers? Will kids be bragging about their vintage Blu-ray copy of Freddy Got Fingered or maybe discussing the thematic importance of Battle Los Angeles? I shudder at the thought . I even shudder at the thought of The Social Network one day being referred to as a classic film. Isn't it scary? It's terrifying!
At any rate, my blatant disregard for the Universal horror classics has meant a lot of mean stares getting sent my way. After not loving Dracula or maybe even calling it overrated, I realized that most people have an instant defense mechanism built in for when people attempt to raise eyebrows at classic films. I always ask these people in my head, do you really believe it is a masterpiece? Or do you just think you have to believe that it is? Granted the majority of people while not necessarily equating it to masterpiece level do love it simply for the impact it made on the genre. This I can agree with for obvious vampire obsessed reasons. But then this idea brings me to The Mummy.
When talking about the Monster Squad once, I made light of the fact that Dracula picked a few of the worst possible monsters he could to populate his bad boys club--namely The Mummy who can barely out walk a gimpy pigeon and who can be turned to dust in seconds. 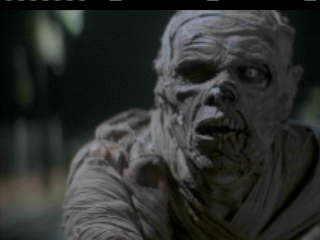 Plus--he's not even very scary...okay well, he's a little scary in his more skeleton-like state but overall, he's not utilized much is he? When I made these claims however, a few people protested the lack of scare by bringing up Boris Karloff in The Mummy. Could it be that at one point, mummies were a scary monster? This I had to see. 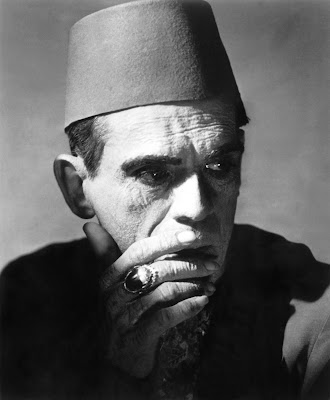 As it turns out, Boris Karloff in my opinion is not scary or terribly great as a mummy. To me he is Frankenstein and as far away from looking Egyptian as possible. To top it all off however, the actual mummification of Boris Karloff is over almost as quickly as it began. For those brief moments where his eyes flutter open and his bandages brush over the young and annoying archaelogists hand, we do feel at least some kind of fear. But then what? Then we catch a quick glimpse of a strand of bandage as it goes out the door and 10 years later, Boris Karloff returns rejuvenated into a presentable if not very wrinkly Egyptian man, and the movie morphs into a Dracula infused love story. Once again, the actual mummy aspect is not utilized properly! 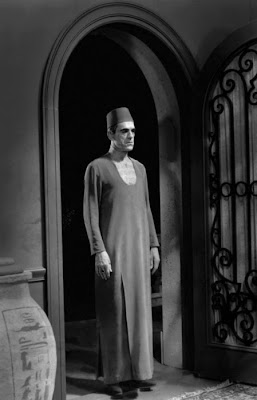 This bothers me immensely for some reason because The Mummy is no longer really the mummy. He is now, a tragic love story. I want the thrills. I want the breathtaking power that Frankenstein evokes. Is this maybe why, mummies never really caught on as staples in horror culture? Is this why we don't have a mummy craze like we have a werewolf and vampire craze? I bet it is. Which of course prompts me to revisit my previous claim; mummies are still not very scary to me but I want them to be. I so badly do. I want them to be fearsome. I want to see blood seep through bandages. I want evil curses to be flying out at people left and right. I want mummies to actually threaten some damage! I think it's time for a mummy rebirth. Who's with me? 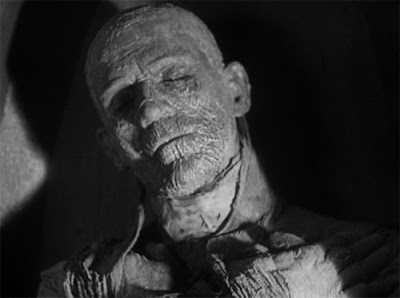 And in case you haven't figured it out by now, I don't think very highly of The Mummy. I didn't even finish it actually which obviously begs the question of whether or not I reserve the right to say bad things about the film but it is my blog and all so I win. It has a few moments of intrigue but overall an improper use of mummies me thinks. And Boris Karloff is still just playing Frankenstein only with some heavy eye makeup. Sorry dude.
Posted by Andre Dumas at 10:56 PM

Dracula and The Mummy overrated?!?!?! LIES, LIES!!!!...just kidding, I've barely seen any of the Universal horror offerings and what I've heard about quite a few of them is on par with what you're saying.

If you want to watch a mummy film that actually is threatening, I might recommend the Paul Naschy film Vengeance of the Mummy. I say might since I haven't seen it, but it's a Paul Naschy film, so I'm guessing that it'd be super-violent, which would mean that his mummy actually knows how to kill without being sucked into a toilet or victimised by Abbott and Costello!

As much as I hate to say it, I think Stephen Sommers did a pretty decent job of remaking The Mummy. You're right. The Mummy isn't really scary (is he not just a glorified zombie with, like, scepters and junk?)Sommers turned it into a fun action adventure flick which works and all that will really work. Unless you want to make it super dark. Which could be kind of nifty.

Oooh thanks Chris, I think someone had told me that before too. I was wondering if there was a better classic mummy out there. I'll have to take a look see.

Haha I've actually never seen the remake of the Mummy Alexandra. I've secretly always wanted to and actually thought that the instant The Mummy was indeed that one. And yeah SUPER DARK would be sweet huh? I'm sure it will happen soon because people still my movie ideas all the time.

Mummy needs some movie love! There's always Hammer's "The Mummy" with Christopher Lee. The best part is the end when the mummy sinks in a swamp which isn't scary so much as sad, I guess. Yeah, maybe the mummy is better off as Dracula's comic relief sidekick, easily destroyed by children.

Andre, the best ever "Mummy" movie is "The Mummy's Shroud" (1967) even though it didn`t have Cushing or Lee, its still a superb film, a reveiw would be nice.

I grew up with the Universal monsters and I love them with all my heart (The Ghost of Frankenstein is the first one I ever saw and it basically got me into horror movies). That said, Dracula and The Mummy were ALWAYS my least favorite of the films. I can appreciate them for what they are now, but no way would I ever call those films masterpieces. In fact, I think the Spanish version of Dracula, made on the same sets, is actually a far better movie in pretty much every respect, even if it lacks Lugosi's unique, powerful presence. Son of Dracula is my favorite of the series, unless you count Abbott and Costello Meet Frankenstein. ;)

Andre, Hammer Film's "The Mummy" is vastly superior to Universal Studio's "The Mummy." I agree with you that just because a movie is old, doesn't automatically make it a classic. I do give respect to the old school Universal Pictures monster movies, but the true classics of modern horror are the Hammer monster movies.
Also, the Mummy did suck in the Monster Squad. In fact Mummies just suck period. One year, when I was a kid, I was a Mummy for Halloween and it just looked so cheap because I just wrapped myself in toilet paper. Damn you Mummy for ruining my entire 3rd grade!!!!!!!!!!!!!

I'd like to third the motion that Hammer's The Mummy is way better than Universal's. There are moments when Lee's mummy is truly frightening.

Don't get me wrong, I love Karloff and Frankenstein and Bride thereof are the true Universal classics. But I prefer when Karloff actually gets to play characters rather than monsters. Check out Robert Wise's The Body Snatcher to see what a great and compelling actor Karloff really was.

I had to watch Universal's 3 times before I saw the end because I kept falling asleep. I have developed an appreciation for it over the years, mostly just for atmosphere.

I'm also with Alexandra, Sommers's Mummy was a lot of fun in that summer blockbuster way. And I'm with you Andre, I'd love to see someone make a scary mummy movie. But I think just mummy wouldn't do it. I'm thinking a hoarde of mummies. After all, what are they but zombies wrapped in guaze?

I also have trouble with the classics. When I watch one I sometimes feel like I'm virtuously eating raw vegetables with no ranch dressing, or doing my summer reading for school. Not that I don't enjoy it, but I have to be very mindful of doing it and I feel like I deserve a gold star when I'm done.

I also grew up watching the Universal flicks but I still find them boring at times. Like in Dracula, the beginning is great and then everyone stands around talking for an hour. It's a different kind of movie-making than what we've seen for a long time, but just like with books that are hundreds of years old, you can find something to love. I can't get enough of the over-the-top gothic set design and the fog and shadow, the lighting contrasts that really play up the horror of a Lugosi and Karloff. Now I love my monsters and my vegetables!

While I haven't watched the classic mummy movies for many years now, I feel safe admiring them from afar. I'm afraid my tastes for horror has gotten a bit 21st century. I want all the fast paced action and special effects (sans CGI of course) modern film producers are kicking out.

It's also true that my childhood memories of the classic horror films set up the foundation for my love affair with the genre, so I can throw respect their way in that regard.

It's interesting that you brought up the untapped mummy genre. I've thought for years that there is some major potential for mummy goodness that lends itself towards the super-dark (thanks Alexandra). Like you said, Andre, it'd be like a smart version of a zombie. Lots of potential there.

Thanks for posting and thanks to everybody else for sharing their thoughts. May your nightmares be terrifying...and turned into cool movies for the rest of us to watch :)