Back in the yesteryears of my life, when I was young, scared of everything and wore high heeled jelly shoes, I stumbled across Sleepaway Camp II: Unhappy Campers. It was late night style--possibly a school night where I had stayed up too late chatting in various "chatrooms". While channel surfing and trying my best to avoid shows like HBO's "Real Sex, I came across Sleepaway Camp II and was horrified. This was obviously why I had never attended summer camp or had the burning urge to ever go. Girls walked around flashing their boobs at everyone. NAKED PEOPLE AHHHH!  And also...there was blood and a crazy camp counselor who took pure joy and thrill out of killing teenagers. Clearly, I was scarred for life. 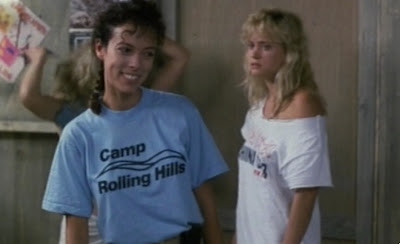 As it turns out, Sleepaway Camp II would go on to become one of my very favorite guilty pleasures. What is it about these movies that keep me coming back for more? Is it because I can't help laughing at the ridiculousness and improbability of teenage girls having giant boobs and flashing them around for everyone to see? 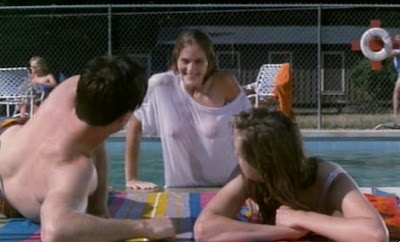 Or is it because there just might be something seedy and creepy about the movie that makes me want to both die and rejoice to the high heavens at the same time?

I suppose it's a combination of both. Although not an Oscar winner on any planet (except planet awesome), Sleepaway Camp II does manage to keep me much more entertained and gleeful than Friday the 13th. Oh back off Friday the 13th groupies! I explained my reasons so you can just take it easy alright? I just have fun watching these. They're kind of icky---but a good icky. If that exists.....and let me tell you--it does now! Angela's methods of dispatching the teenagers are so unusually brutal that you can't help but wonder---was being forced to be a girl really that awful? Also, why does no one ever question the sound of chainsaws in the woods at night, or roaring fires a blazing in broad daylight? 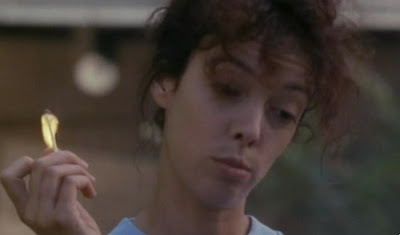 At any rate, if there's one thing that always stuck with me from that first ever viewing of Sleepaway Camp II--- it was the outhouse massacre. Those who are privy to the delights and wonders of the film obviously know what I'm talking about but for those that don't--let's recap!

Angela is a crazy psychopath camp counselor who systematically kills all of her campers for being "bad" in one way or another. Ally---big boobs McGee gets caught having sex in various places which doesn't fly with Angela which of course prompts her to dispatch Ally. After writing Ally a fake note composed by camp hottie Sean--Angela proceeds to berate Ally for being a raging slut. She then shoves Ally into an outhouse and forces her head down to look at the shit and piss---because obviously Ally is shit and piss. 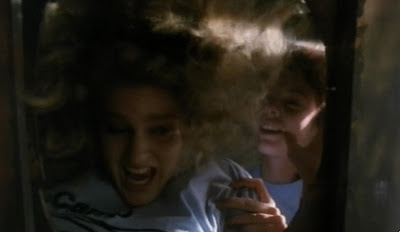 THEN she shoves Ally all the way down the outhouse into the hole and drowns her in the shit and piss by holding her head down with a giant stick. Plus also there is a surprise cameo by some poop leeches. 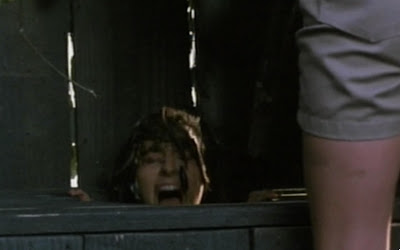 It just might be the most horrifying and gross thing I've ever seen.

Aside from that little ditty--the movie is also just insanely entertaining. It's so crappy but good crappy you know? Plus it features one of my favorite things ever---the revealing of all the dead bodies where nobody looks even close to what they used to look like. In fact they look like crappy mannequins.....oh wait. Actually, I take that back--these are definitely real people because if you look closely, the poop leech double's tongue moves. So good work, stand in dead bodies! 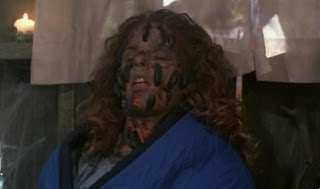 Yeah. Sleepaway Camp II I still have feelings for you. It's comforting to know that after all these years, the spark is still there. Keep being pervy Sleepaway Camp II. Keep it right on coming.

Such a lovably terrible movie. Also, please give me directions to Planet Awesome.

Be still my heart Sleepaway Camp 2. I do adore you so.

I love this sequel. So many cool moments. Makes me want to be a Happy Camper.

Isnt angela played by bruce springsteens little sister? or is that an urban legend?