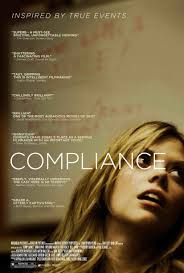 I've taken a long, long break from my Exploration Disturbia series probably because my mental health was at risk and because I was starting to run out of movies deemed 'disturbing' that were available on DVD. Also there was that whole thing where I stopped blogging for like 7 months.

But anywho--last night I noticed that Showtime had some horror movies available On Demand that I had been meaning to see for a while. One of them, Compliance--did remind me that several of my friends had used the term 'disturbing' to describe it. No time like the present right?

As with many horror movies that are 'based on true events', Compliance carries with it an extra note of horror because it really happened. Additionally--when comparing the actual events with the events of the movie, the exact similarities are startling. In my mind I was pooling together a list of what the movie embellished, but I was shocked to discover that they embellished nearly nothing. Hence, the reason why Compliance is so disturbing.

Based on the Bullitt County McDonalds Case, Compliance follows a night at a fast food restaurant after the manager Sandra receives a phone call from a 'police officer'. "Officer Daniels" informs Sandra that one of her employees, Becky, is charged with stealing from a customer, prompting Sandra to then follow explicit directions from Officer Daniels, resulting in some disturbing events. After having Sandra strip search Becky., Officer Daniels then requests Sandra to get someone she trusts to keep an eye on her. Becky, still naked, is then guarded by Sandra's boyfriend Evan. Evan receives instructions to give a full cavity search to Becky which essentially leads to some serious sexual assaulting. 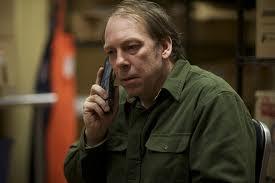 The really, really terrifying thing about Compliance is that  you can sit there the whole time and be horrified and then yell things at the TV like, "Oh come on!" "Who would do that?!" and then realize that this did happen and cry. I still am having a hard time wrapping my head around it. This really happened---an employee was subjected to these terrible things because someone with apparent authority was telling someone else to do it. This is a present day example of the Milgram Experiment, only it wasn't an experiment it was some sicko. But the psychological implications remain the same. Therefore  the things I'm feeling in this movie, remind me also of the terrible feelings I had watching movies like Salo and Man Behind the Sun. Why are we as humans programmed to listen to people with authority---even when there is absolutely no evidence that the person has actual authority? 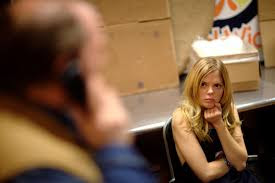 Perhaps one of the things the movie does embellish a bit is the events leading up to the incident and how it impacts our sympathy of certain characters. The manager Sandra is first introduced as being lectured by a delivery man for not being a good manager and letting food spoil. She also points out that she avoids calling her regional manager because she wants to deal with it on her own. A very strong indication that she already lacks faith in her abilities as a manager, and wants to do whatever she can to prove that she can handle things.

Similarly, Becky is anxious about losing her job because she fears she is to blame for the food spoiling. Is her willingness to go along with everything that is asked of her an attempt to hold onto that job and do what is requested of her without disagreement? I guess... 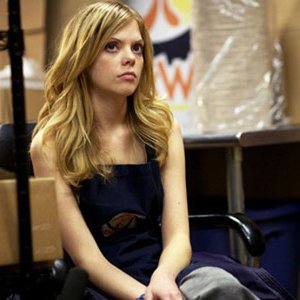 It's still all so messed up even without these apparent sympathies. I just will never understand how someone can decide that yes, a police officer does have a right to request that a burglary suspect should give someone a blow job? Why are people not paying attention to important police shows like Law and Order? 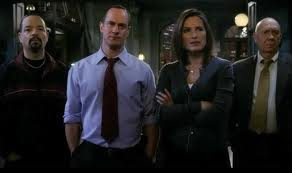 Don't they know that a police officer would never need someone else to do real, honest investigating for them? It kind of makes me angry actually. Angry at the people who let this happen, and the sicko that made the calls in the first place. The really, really awful thing too is that the real-life suspect was never charged because there was not enough evidence!

Compliance definitely makes a spot for itself on a list of disturbing movies. I just felt SO sick after watching this and trying to digest it. Why do things like this continue to happen in our world? In these instances, the most terrifying horror movie in the world cannot hold a candle to the kind of fear we experience knowing that human nature is the real threat.

I remember this case and watched the video footage on Dateline, 20/20 or one of those other shows. I about puked and my heart still goes out to that young girl. The adults in this situation were so f*cking stupid to think that the caller was A REAL POLICE OFFICER. Either way, I appreciate your review but can't watch it because I'll just end up bashing my TV screen in. :) I recommended your site in my article.

I remember watching this on Dateline, 20/20 or one of those other shows. The video footage was so disturbing and the fact that the adults in this situation were so f*cking stupid to believe the caller was a REAL COP still blows my mind. My heart goes out to that young girl and hope she has been able to get the mental and emotional help she needs. Wish i could say I would watch this film, but i'd end up bashing my TV screen in. Thanks for your honest review, though!