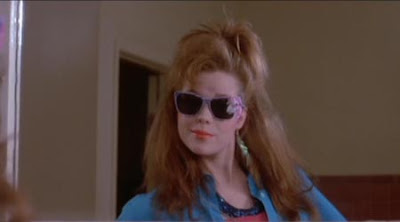 A good montage is like a good sandwich. It's comforting, delicious, and goes unusually well with bad/good TV like Full House.  Or maybe that's just what a good montage is to ME. Yeah, that sounds about right.

I've never been one for conventional greatness. Sure, it's fun to impress others with your seemingly endless supply of IMDB trivia knowledge and your unfaltering obsession with Citizen Kane and blah blah my cinematic knowledge is vaster than yours because I know things man.... but deep down--it's not what we all crave.

Take me for example. I show no fear in proudly confessing the movies and TV shows that make my heart sing. Movies with great montages are like little reminders of the good ol' days. A time when movies didn't require any sense of cinematic intrigue. They just made you feel good. And BONUS--these montages and their accompanying tunes provided the perfect soundtrack for doing the dishes.

So here is a short compilation of some of my very favori-test movie montages.


I'm not convinced there is anything better than Teen Witch. While the movie is filled with amazing songs (I like Boys), classic lines, and good old fashioned cheesy goodness--it's this montage that always pops into my head when I'm getting ready for work, vacuuming, or brushing my cat. Simply put--this is an everyday kind of montage... you know?

Rock Until You Drop


God, I love the Monster Squad. Did I ever tell you how strangely obsessed I was with this as a kid? Keep in my mind, I was terrified of horror movies and anything even remotely scary yet for some reason I would just need to watch this. Probably because of the insanely hip soundtrack. Or because my life goal at the time was to be a sexy vampire mistress...who knows. The point is--this song makes for really great kitchen dancing. And also I get a weird sense of accomplishment from watching Rudy make silver bullets in metal shop.

I just love montages that really stick it to all the disbelievers in the movie. Nothing says 'I told you so' like a montage that proves that our main characters are the very thing they set out to be. Take that---mean guy. In your face asshole person...I got a MONTAGE biotch. I'm fairly certain that's the exact inner monologue running through the Ghostbusters' heads.


Until very recently (like 5 minutes ago) I totally thought the song that played during the great ring hunt of  94' was 'Dude Looks Like a Lady' and I was like whoa guys whoa---if only we paid attention to what those lyrical geniuses were telling us, we would have solved the movie!! But then I was like oh wait...Dude Looks Like a Lady is the montage from Mrs. Doubtfire that details how well Robin Williams fit into his role as a fake woman. Drats!

Sisters Are Doin' For Themselves

I suppose it's time to admit that I have a guilty pleasure for all movies that star Diane Keaton and Goldie Hawn. Which basically means that The First Wives Club is about the best thing that could ever happen to me. What's more empowering than this song? Does anyone else like to sing this to themselves when they're doing something totally pointless like taking a trek to the mailbox, or carrying 3 grocery bags to the door? I guess I'm the only one who truly dreams big.

I just can't help but feel a real sense of admiration for Sue Ellen during this montage in DTMBD. She's 18 and she's already made a sucessful career for herself simply by using street smarts and her good fashion sense! Aside from being the #1 indication of whether or not someone is cool---this movie also reaffirms the point that you don't need college in order to have a great career. Just fake a resume and watch how easy it is to climb the corporate ladder!

The Teen Witch one might be my favorite too. There's a few split second shots in there where she pumps her arms while wearing a jean jacket that I just love. Yes, I've gone over the Teen Witch montage like it was the Zapruder film.

That Monster Squad song is also in the made for TV prom movie Dance til Dawn BTW.

I miss the days when you could get a high paying job just by lying on your resume about everything.