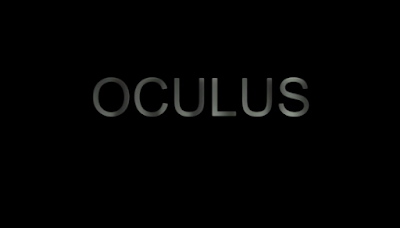 Whilst on my year or so long (or two year?) hiatus in which I basically just watched Reality TV and ate cake---I missed A LOT of things. I missed a lot of good horror movies and I missed all the elbow rubbing with fellow horror fans being like, "Oculus. Huh!? Huh?! Yeah!!" It made me sad to hear brief snippets about what was great, and why horror was seeing some serious resurgence in the 'good stuff' category of our minds. So now that I'm back (knock on wood) I have a lot of catching up to do. Some things I did watch but never got around to writing about, and some stuff I just plain missed like today's film---Oculus. So let's do this.

Oculus intrigued me for several reasons. For one it was what many called a huge win for horror fans and for the little people of the horror world in the shape of Mike Flanagan who also directed one of my favorite indies--Absentia. Also we're Facebook friends? So yeah. Good stuff. Good stuff. Proud of you Mike. For two---horror fans loved it. For three it stars Karen Gillian aka Amelia Pond which made my head explode. I should also mention that during my year long hiatus I fell down the deep rabbit hole of Doctor Who so this was probably the best thing to happen ever....even though she wasn't Rose Tyler, it still put a gigantic smile on my face. So yes, Oculus had all the good stuff going on.  But did I like it?

Sure! Here is a secret. I turned this off when I had about 25 minutes left to go because I was worried I would not be able to fall asleep. Yup. Look, I'm sorry if Conehead teeth affect me so much OK? Its' not my fault it's like the number 3 scariest thing behind sharks and clowns. More on that later. 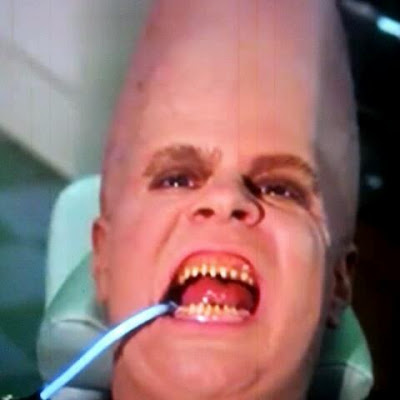 Ultimately, Oculus weaves an original story of a mirror that possesses those around it with evil thoughts. The film is told between two time periods switching rapidly between the two which gives the whole film a feeling of unease and uncertainty. Which funnily enough is exactly what those evil mirrors do. And I don't just mean the evil mirror in this movie--I mean in general mirrors are pretty evil. Sometimes they trick you and make you think you look good in that dress but you don't. You don't! ............... so anyways, there's this evil mirror and Kaylie and Tim have reunited to destroy the mirror and avenge their dark family history. There are more details but since I'm sure everyone has seen this by now I think we can skip it. 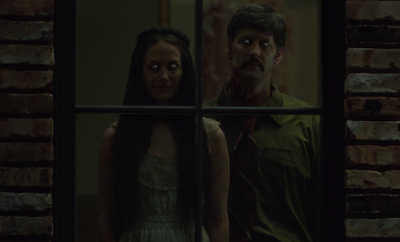 For the most part--Oculus really griped me. The story is simple enough and not convoluted with mazes of the ridiculousness that tends to handicap many modern horror films today. The gore is present but is overpowered by more legitimate scares. The ending while somewhat predictable and slightly maddening still fit within the entire story well. It wasn't an out of left field, 'Oh just kidding you guys it was actually aliens who are diabetic" kind of ending. (although now that I mention it, I think we could all use more movies about diabetic aliens.) The scares--as previously mentioned, made me pee my pants a little and were well orchestrated. There were a lot of my favorite kind of 'quiet moments' of horror---the scene where Kaylie glances into her father's study and sees a woman massaging his shoulders that is NOT her mother for instance, and the little subtle tricks the mirror plays on the mother were extremely well done. There weren't too many jumps which I appreciated and the CGI was kept to a minimum. 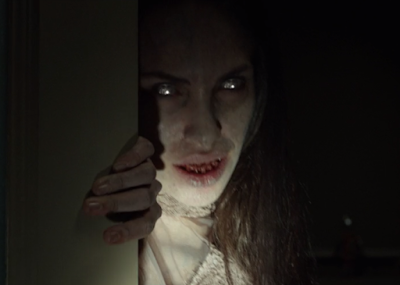 The only thing that really saddened me was that I felt that Karen Gillian had a really hard time covering up her Scottish accent. I'm not sure if it was her lines her what, but she kept getting down into this extremely low octave kind of husky voice that really jarred me. Also even though the gore was kept to a minimum the gore was very upsetting. This is the kind of gore that truly makes you cringe. The pulling off the finger band-aid scene for instance had me slowly dying and the lightbulb vs apple scene made me want to cry.

Sure, maybe another small problem is that the film has a habit of falling back on that--AHA gotcha, trick of the mirror trope, but I think for the most part it balances what is real with what is a mirror illusion fairly well. Also, I sometimes wish we had more of a glimpse of the other mirror ghosts. Sure, Marisol was terrifying and her Conehead-like teeth will probably haunt my dreams until forever, but what about everybody else?!? Give them a chance okay?

Ultimately, Oculus is a pretty solid entry into the horror world. I'm sad I missed the hubbub surrounding it and now I feel like that loser who is like...."Hey guys......how about those Beatles!? Huh? Huh?!" Oh well. We can't all be winners. 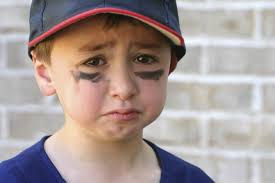 I loved ABSENTIA and I really liked this.

Even this early in his career Mike Flanagan has a grasp of creating atmosphere that most directors never will.