Blame it on the Creeper 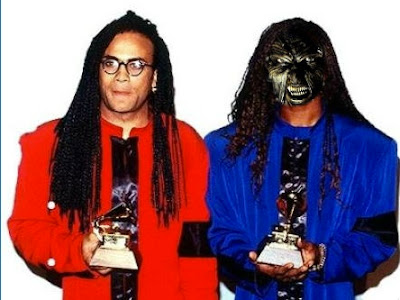 Jeepers Creepers and I have a very complicated relationship. He's my friend (and lover when I've had too much of the wine) but more often than not, we seem to get into these insanely ridiculous fights. The ones where you just keep bringing up these trite points that have nothing to do with anything but then again when you think about it, it's those moments and those trite points that really come to make so much sense. I had one of those moments yesterday after watching 30 minutes of Jeepers Creepers. I realized that even though Jeepers Creepers can be entertaining when it wants to be, the film and I will never be great friends because the Creeper makes no sense in the grand scheme of life. And it really messes with me!
Let's lay down the facts first.
1. The Creeper is a demon who wreaks havoc in rural Florida every 23rd year for 23 days.
2. He wreaks havoc by killing people and taking their body parts.
3. He uses these body parts to form parts of his own body.
4. He can smell fear.
So that's the basic layout of the Creeper but anyone who has actually watched the movie can hopefully join me in screaming WHY DOES HE DRIVE A TRUCK? and also other stuff that makes no sense.
Listen, The Creeper. If you're some big crazy demon who can fly and do all sorts of scary demon stuff---why are you blending into society by driving an old beat up truck and wearing man clothes? The Creeper goes from being an all powerful, unwoundable (I made that word up) beast to a paranoid serial killer who feels the need to burn the evidence of his killings to the ground. I mean really? Was he worried they were going to find some incriminating evidence? Line him up for identification and give him the death sentence?
(Oh wait I meant INDESTRUCTIBLE. Silly me. Woundable...)
I just don't get it.
So because I like bullet points and/or numbered lists of unimportant "facts" I will spell out my frustrations right now.
1. How did The Creeper learn how to drive? 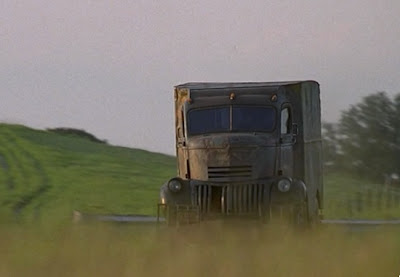 I hate to break it to you but learning how to drive can be difficult. At least it was for me when I found out that driving up a hilly stone driveway means holding onto the wheel tight and not hitting a tree. I just have a really hard time believing that The Creeper woke up one day after 23 years, got into a truck and started driving.
He's got crazy demon hands and demon feet---and sure he's an erractic driver but have you seen his control? That truck cannot have great suspension but man, does he know how to manuever it. Yup. Like I said. Not buying it.... The Creeper.
2. A Vanity Plate!? 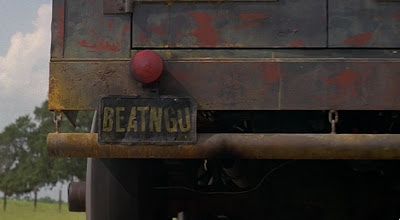 As if that wasn't enough, The Creeper also feels the need to get a vanity plate for his demon truck. Again, I find it hard to believe that either A. The demon stumbled upon a vanity plate that perfectly spelled out his M.O. or that B. He went to the DMV to register this vanity plate or C. The license plate randomly spelt out those letters and he just got extremely lucky.
3. Why ruin your life's work? 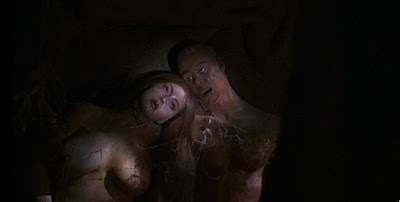 I still will never understand why after discovering that Darry had been in his secret lair, The Creeper panics and torches the place. It's not like the police would have found it and then been on the look out for a crazy demon. No, they would be on the look out for a serial killer who was crazy. Trust me The Creeper, you would not be a suspect because to everyone except Darry--you do not exist.
Plus, why would you willingly get rid of your Sistine Chapel of hell? Actually, while we're on the subject---why was he turning his victims into a cruel work of preserved grossness anyways? Didn't he just need their body parts? Why save them? I DONT GET IT. He's not a serial killer, so he doesn't need to keep trophies.
4. Why does he even need to take people's body parts?
He seems to be doing pretty fine while looking like a big scary demon. Not to mention, that his eyes look fine to me--why does he need Darry's eyes? Will his demon body expire for good if he doesn't take the body parts of humans? Will GOD win if he does not absorb other peoples body parts and take them for his own? Did they explain that and I was too busy laughing while imagining The Creeper waiting in line at the DMV?
5. BLAH BLAH BLAH 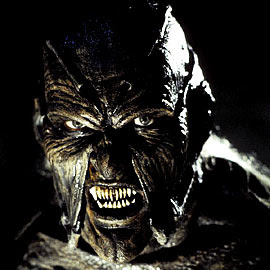 Right. Well....anyways like I said, I enjoy Jeepers Creepers from time to time but ultimately because it makes no sense-- I can't ever make peace with it. It's too bad because we had a pretty solid history too.
But come on you guys. Does this movie really make any sense to any of you?
I'll tell you what it seems like to me. It seems like the creators originally took this idea of a crazy and sick serial killer who brutality killed people, took body parts and then tacked them up on the ceiling. Somewhere along the line, they were like WAIT, let's make him a DEMON. And then the ridiculousness of Jeepers Creepers was born. They didn't bother to change all the elements that would have made sense had The Creeper been a real person and then everyone was like ahahah BLAH BLAH BLAH we made a movie let's get drunk!
Okay that was mean. I like Jeepers Creepers, I do. But I'm not afraid to tell it like it is. It makes no sense. And that's all I have to say about that. 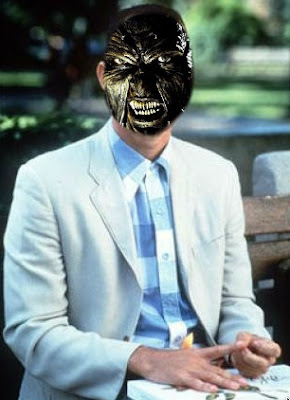 I think I've figured it out. He waited in line so long to get his vanity plate that he got so angry that he turned into a demon.

Have you seen the Unsolved Mysteries clip that supposedly inspired the beginning of Jeepers Creepers? It's about some creepy guy that killed his wife. Here's the first part:

Ha! This is definitely a bad movie that I occasionally love, so I get you.

Like, it's stupid....but then there's that one shot with the billboard in the background and I'm like "This movie rules!"

I agree with everyone of your points...and yet, I love this damn movie.

Damn. You really are TOO funny. You should debunk every horror film known to man.

You make extremely valid points. I love the first half hour of JC - the banter between siblings, the obvious road-raged truck driver, the churchyard and hidey-hole... Then they had to go and have the dude be supernatural or whatever. With his wing flapping on the pavement and that crazy cat lady and the psychic woman...? WTF?
It all falls apart. Boo.

I can't quite see whats down this long pipe. Hold my legs while I look down there.

Unsolved Mysteries! Man, if a show was ever to give me nightmares it was that damn one. I will watch that at work today Thomas and then cry. I'm excited!

TH- YES. Crazy cat ladies do make everything better. Plus not only is she a crazy cat lady btu she's Mrs Peacock from CLUE! double win.

Pax- I love it when I want to. Ooooh wait, I just figured it out--Jeepers Creepers is my booty call!

Chris-So so true. The first hour is fabulous. I too love the brother and sister dynamic. It's so refreshing for their not to be some ridiculous love story, or BOOBs or something you know?

Ed- A way to go moment for sure!

It's creepy as all hell. I saw it when it originally aired and it made me want to curl up and die. Just the guys mugshot alone is creepy.

I'll have you know that I just had to pick my jaw up off the floor at that Unsolved Mysteries episode! It's like watching the true story of Jeepers Creepers! I had no idea that movie was loosely based on something that really happened. I'm totally eeked out now and have to watch JC......

I love this creature, i personally played him at a yearly haunted attraction for 4 yrs! But to maybe shed a dif outlook on the topic it is being fed to us by CW shows and such that Demons are all once human, Jeep could have once been human and this is where it gets intriguing... He fits the folklore of a Wendigo perfectly... So super badass Wendigo Demon.... Either way I cannot wait for an origin story...