What is a Jackal? I'm Glad You Asked! 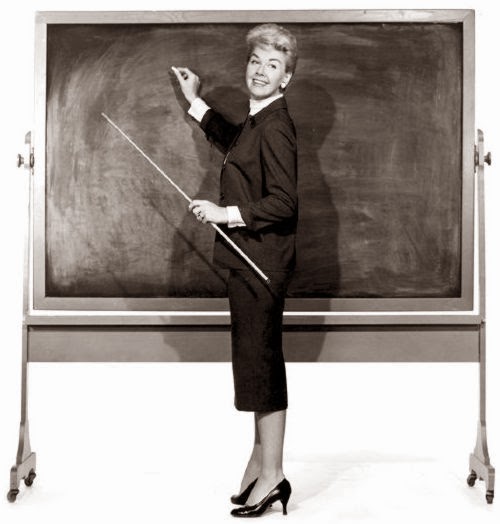 Ever since Blogger introduced its nifty little stats button, I've been enthralled by seeing what people are searching to find my blog. Unsurprisingly, the vast majority of people end up here by searching for miscellaneous naked people. All variations of ways to describe a vagina are usually in the top 5. Naturally my post on Aftermath (which I mistakenly titled 'Dead Vagina' in my links sidebar) has been the #1 viewed article for a while. Apparently I missed the part where everyone suddenly became very interested to know what a dead vagina looks like?

This past year however has seen some changes in the most viewed line up. Now my top keyword search list is filled to the brim with variations of, "what is a jackal" "jackal, omen" "wtf is a jackal?" Naturally my post about The Omen (aptly subtitled 'What Does a Jackal Giving Birth to a Human Actually Look Like? And Follow-up Question, is that Even Possible?) is what people land on. Unfortunately that post is a review about a horror movie not a lesson on jackals. Which naturally got me thinking---why not give the people what they need? Let's have a lesson on jackals!

Jackals are real animals. They are in the wolf family and look like this. 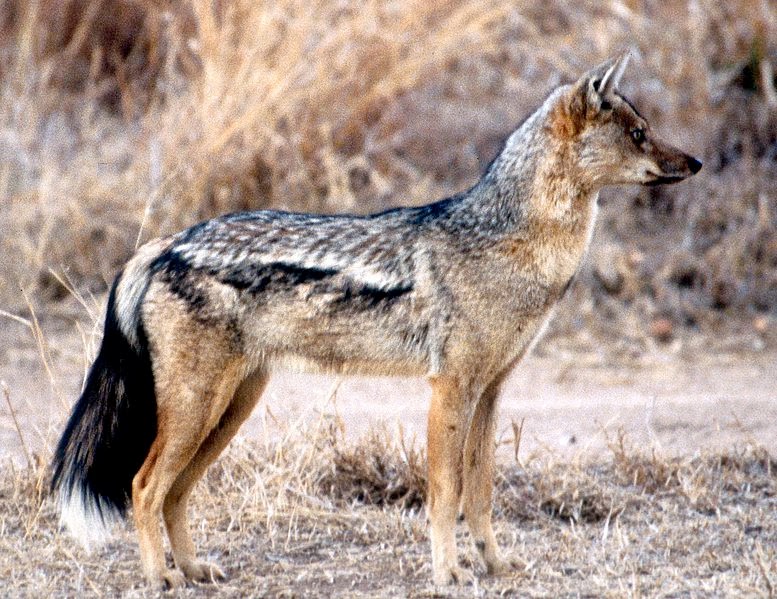 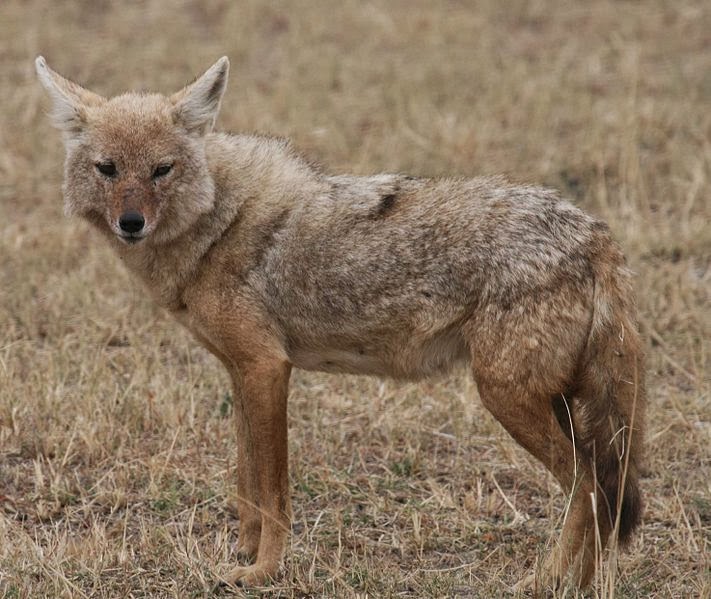 Jackals in mythology were representations of cunning wizards/sorcerers and are usually paired with phrases like; sly, tricky, miserable etc., The Jackal is also what Anubis' head is in Egyptian mythology.

Now, I can see why people are still trying to figure out what a jackal is. There really is no explanation anywhere for why Satan is having sex with a jackal and producing Damien. As far as I can the explanation is---shut up it's just a movie. 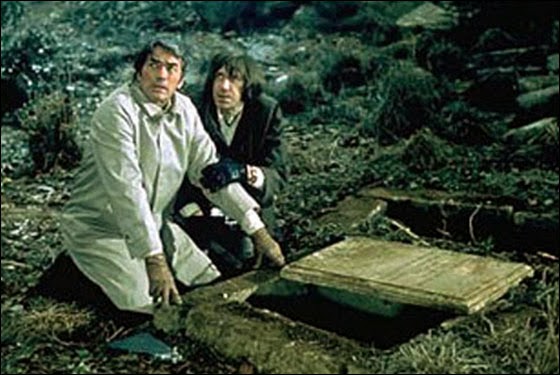 Really though. A jackal is a dog/wolf thing that Satan implanted his child in. The jackal somehow gave birth to Damien and then possibly stopped off at Baby Safe Haven or died in the hospital. I'm guessing the dying jackal collapsed on the hospital steps with Damien snuggled in her bosom. Just kidding. Here's what probably really happened. Satanists took Damien birthed from the jackal and brought him to the hospital, while at the same time killing Gregory Peck's actual child so that he would have no choice but to adopt a random baby that wasn't his and just pretend that it was his. See? Makes perfect sense.

I'm still unsure about why Satan chose a jackal but I'm guessing it was just a sort of dark/evil animal and also he probably had a thing for jackals. So what?

All the Boys Love Mandy Lane: And the Hype Monster Does Too 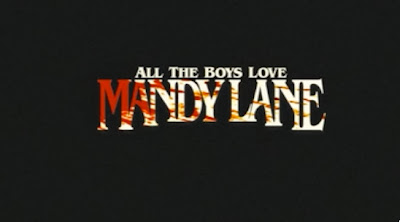 Fact is, All the Boys Love Mandy Lane is a pretty good movie. But I don't think it's anything to write home about. Such is the wrath of the hype monster. Maybe it's because it took so long to be properly released? Maybe the modern-take on the classic Slasher formula thing got overplayed in the time between when the film first came out and when the majority of the public actually saw it. That's sad. That means that all the other sucky movies that could get released took all the glory. Ah the injustice. 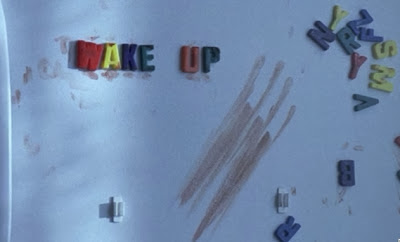 The film is set-up as classic Slasher movies usually are. Teens in a secluded ranch house get picked off one by one. The modern twist is that the killer is revealed/obvious fairly early on. And our 'final girl' has something so mysterious about her that we still can't figure it out by the time the credits roll. The twist in the ending is a little predictable although the film does try to do something a bit different with it, which is nice. The ultimate question though is---WHY do all the boys love Mandy Lane so much? 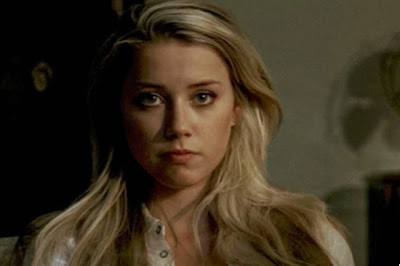 Admittedly there is something tantalizing about Mandy Lane. I think it's because she's so aloof all the time. She don't give a crap about how all the boys like her that's for sure. Plus, she has some weird dark past, and she lives with her Aunt and is really good at running. Her main attraction though really is her unattainableness. At the film's beginning a meathead jumps off the roof of a house into a pool right before shouting his love for Mandy Lane. Then whoops he dies. 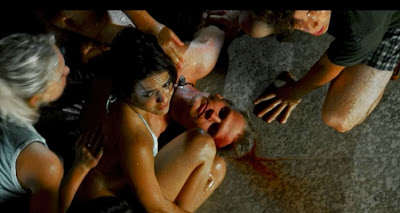 So there we have the key factor. All the boys love Mandy Lane so much that they die trying to get her. Makes sense. I guess.

What doesn't really make sense is the motive behind the killings.

I'm still scratching my head. I'm also still scratching my head about the timeline of events. There's something to be said for things intentionally being left vague, but so much of this just feels way too vague and possibly unintentional. I just couldn't help but feel that the movie was missing a solid 20 minutes or so of….I don't know explanation? Flashbacks? I still just don't understand key elements which is bothersome. Why this group of people? Why Mandy Lane? What happened to her parents? Why is it good she make new friends? What happened to her old friends? Has this happened before? Is she secretly a lesbian? Is the movie a commentary on the social stigma of being gay in high school? 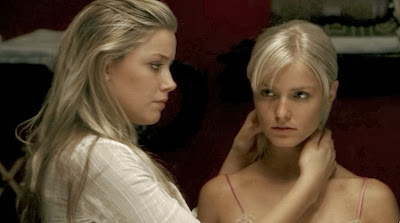 Why won't anyone tell me anything?!! DID the movie tell me this but I somehow missed it because I busy trying to make sure my cat didn't shit on the rug again?

Anyways. If you put aside all that confusion and annoyance, the movie is still just OK. The first kill is fun but the rest are mostly just shotgun parties. And what fun is that? I think unfortunately the reveal of the killer so early on kind of ruined the real fun and satisfaction that the movie could have attained if it stuck with the classic slasher motif. But it's desire to split into this new modern trickery-spin thing…kind of derailed all that satisfaction.

Oh Mandy. I just don't know about you. I'm not even sure if I liked you or not. But I want to. Someone help me. Someone who saw this long ago and sung its praises tell me why, help me understand. I want to join the circle of laughter and fun. But I'm stuck outside moping. 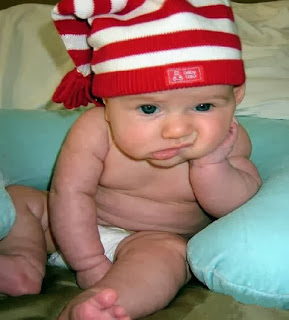