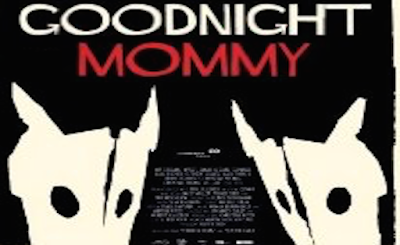 Goodnight Mommy has been recommended to me by at least 2 people. Of those 2 people, 1 is famous and the other one I've never met in person. Those of you bad at math this equals= must see in my book. But honestly, I'm just really looking for a good movie you know? Unfortunately, I could only watch Goodnight Mommy on Amazon which means I can't take fun screenshots which is a shame because I had some really good ones in mind---and also this post probably won't be as funny now without them. Poo.

Goodnight Mommy is an Austrian 'Psychological Thriller' which in layman's terms means that the movie is not what you think it is about and also probably there is a twist. It's important to know what these genre tags really mean you know. SO, the movie is about twin boys who live in a secluded Austrian arty house and who get into shenanigans on a daily basis. One day their mother returns having just had plastic surgery and to them she seems different. Soon their suspicions escalate into dangerous and terrifying territories. 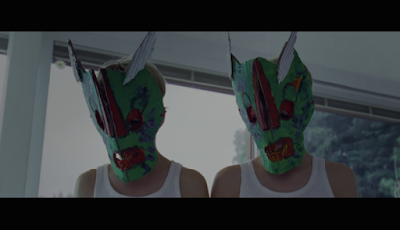 First of all---the BEST thing about this movie is how it brings me back to Eyes Without a Face. 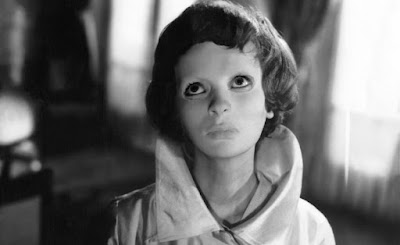 There is nothing better and I repeat NOTHING BETTER than a creepy bandage mask that distorts an actor or actress' face. There is something so simplistically creepy about this that makes my insides squirm with excitement. I love it because it's not some otherworldly mask or some ingenious special makeup effect. It's bandages. 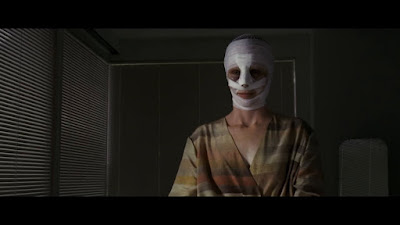 Second of all---I love me some psychological horror. Unfortunately this means that I can guess 'twists' within seconds of watching a movie and then I spend the whole movie checking off points in my theory that continue to be correct. Good news I won. The thing is though--knowing the twist right away doesn't ruin the movie. What happens as the movie progresses is terrifying whether you know the twist or not. 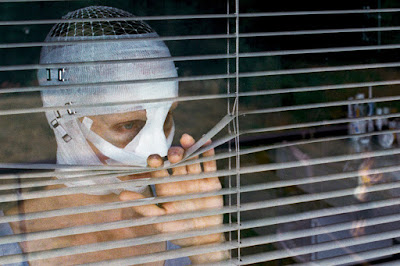 Also notable here is how our loyalties change throughout. In the beginning part of the film, we are made to be on the boys' side. 'Playing along' so to speak and questioning at least on some level that their suspicions may have some truth to them after all. But the really great part of this is that even if we trust their suspicions at least to some extent---what ends up happening is so off-putting and horrifying that we come away being on the mother's side by the end. Actually, maybe we are never meant to be on the side of the boys. I mean......little boys that fill an entire fish tank with cockroaches are no friend of mine OK? What the fuck. 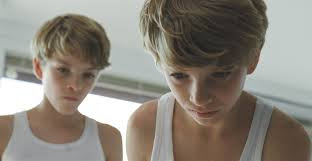 Here are some other thoughts about this movie.

I continue to be amazed at how good foreign movies are at gore. This is not gore as we know it-- this is gore done with a steady hand that knows exactly what will make you cringe without being too over the top. There is a scene here involving superglue and scissors that made me climb out of my skin and cower in the corner, weeping. I still get the heebie jeebies  thinking about it.

I don't know how they do things over in Austria, but if solicitors come a knocking and you don't answer apparently they just fucking come in? What the hell. If you can't pretend that you aren't home when the Jehovah's Witnesses come---what safety is left in this world? Ooh....that might just be a fantastic idea for a horror movie. Don't steal it.

Yes there is a cat in this and yes it ends up dead.

By the end, this movie becomes so unsettling that it's difficult to digest all at once. It kind of sadly reminded me of that movie where the kids lock their parents in the basement so that they won't get a divorce...what was that called..,OH yeah House Arrest. 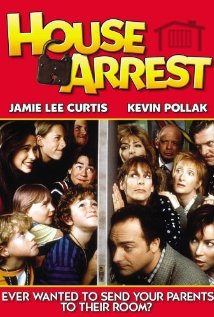 What a shitty movie. The entire time you are thinking---'Well, I guess they can never let their parents out because then their parents will probably kill them'. And also, 'Wow this movie really sucks.' The same is true (except for the shitty part) of Goodnight Mommy in that at one point you determine that the boys have definitely gone too far and when that happens you come to the horrific realization that there is no turning back.


Overall, I was mostly impressed with Goodnight Mommy. It's very quiet in how it delivers its horror and it kind of sneaks up on you. You really need to stay with it I think in order to become affected here. It's the building up of the madness that really seals the deal. Sure, I came away with a few questions but they weren't deal breakers. Knowing more about certain aspects of the film won't make it any more or less great and that is important to note. It has some superb shots happening and I find overall that it's very understated in its attack but dang, does it sneak up on you in the end.

Feel free to discuss fun spoilery stuff in the comments!
Posted by Andre Dumas at 10:53 AM 1 comment: