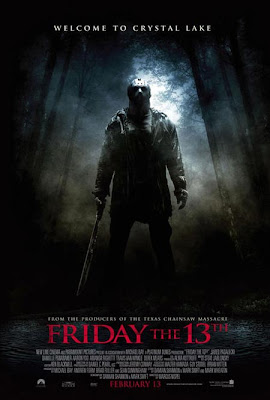 I like heavy mindless jason - he is a force of nature. That said, Friday the 13th is the MacDonald's of horror franchises. The formula is the same throughout. There is one in which he fights a psychic chick, which is awesome. Another you find out that he was twins. What? This series has issues.

Really the first one is the most unique. The mom as killer is a classic twist. Jason has come to represent the franchise so that people are surprised after watching the first one.

So why spoil a good thing by remaking it to be just as formulaic as the rest? Bad studios. No cookie.

I like it for what it was...a mediocre Slasher film and nothing else. I am one of the few and I don't blame anyone that is not a fan of the series to begin with to enjoy a remake.

I love the Friday films, but they are the junk food of horror cinema (kinda like Igor just said)...there are a few solid films in the mix, but in general, they are entertainingly bad. I love them so!

Great review and at least you gave it a shot.

Loved this review - I've said it before and I'll say it again: The remake of F13 makes the original look like Citizen Kane!

You are so right about the The Mrs. Voorhees connection ... uh, Jason is there, in the woods watching his mother avenge his death, wha? Excuse me, he is not dead after all? At least in the original, the Jason jumping out of the lake could have been considered a dream.

Ah whatever, a total piece of tripe.

I'm in love with the Friday movies, so I guess we're on different playing field with this one. I loved the "remake," even though it's not really a remake. It's really just a reboot of the series for a new generation. It's a 2000's interpretation of the 80's slasher and I'm a fan, but I guess I can understand where you're coming from :P

Not a fan of the series as more than laughable diversions, and thus I thought this one fit right in.

I did like the "stoner Jude Law" character in the first group.

Still haven't seen this remake - it's down in the 100's on my Netflix queue, though. As for the original series, a couple of the films were fun, but I tended to gravitate towards the Nightmare on Elm Street movies.

Yeah, I can see some executive sitting in a room telling the writers, "You know what kids want these days? Boobs." "But we need to develop the..." "Booooobs!" *puffs on cigar*

But another great review, Andre :)

It's funny how it's so evenly split between likes and dislikes! I love it--and Dod I am a NIghtmare on Elm Street Gal too!!

To have seen the originals during the 80s and 90s definitely turned the series into mythic status. You had to rely on a copy of Fangoria to get the scoop.

The remake was totally crappy and I hated every minute of it. But for the first 3 of the series,sure they are cheesy but when you only got half a dozen horror flicks released theatrically back in the day, you thought Jason was awesome.

Jason was never fulfilling his mothers goal-other than kill so many people noone ever opens a camp there again. However, as noted, the mother's motives make no sense. If Jason didn't die, why is momout to kill. That was an issue the original # 2 had as well...