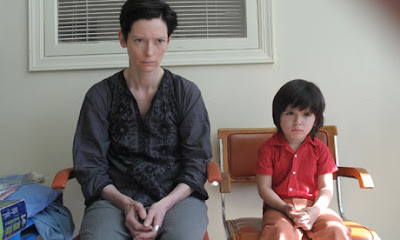 If you want to talk about disturbing books or movies, then We Need to Talk About Kevin is your bitch.
For serious. This is a terrifying and utterly disturbing double bill of horror and despair. But not in that, holy shit blood and guts, having sex with a baby way. More like...holy shit my son might one day grow up and have sex with a baby kind of way.

Now that we've got crass out of the way, let's start at the beginning.

I've been wanting to see We Need to Talk About Kevin for the better part of its inception. Tilda Swinton won acclaim as per usual in her whole as Eva Khatchadourian, the mother to sociopath Kevin. The story intrigued me as possibly the answer to that age old question of, "but what about the parents." What about them? Is it really a parent's fault if a child is a psychopath from the minute he exits the womb? 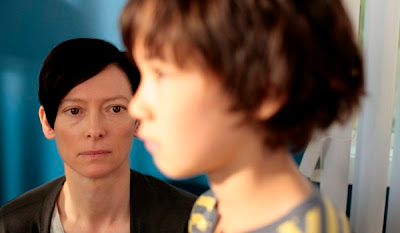 Before I saw the film however, I decided it was my civic duty to read the novel by Lionel Shriver first. For anyone on the fence about the movie (if there is someone out there on the fence about it) then I highly suggest you read this. The book completely sucked me in and had me in total shock and despair for the better part of the week that it took me to read this.

I suppose the entire book is like a bad car accident you can't look away from. While the movie did its fair share in painting Kevin as the villain--I sometimes felt like he didn't seem all that bad. The book however is the complete opposite. Kevin Khatchadourian is the anti-christ.

Even as a infant, the way he is described with his black lifeless eyes, how he pulls hair not out of curiosity but out of pure hatred just chills me to the bone. His evil shenanigans are amped to 9,000 degrees of scary. Like, tying his sister up and feeding her gross concoctions of food until she pukes, or dousing his sister's eye with liquid plumber resulting in her having to wear a glass eye for the rest of her life.

Perhaps most infuriating and terrifying however is how clueless Eva's husband is. It's the kind of anger that truly and honestly gets your blood boiling. Really though, what is scarier than having your son be a sociopath and having your husband not believe you? 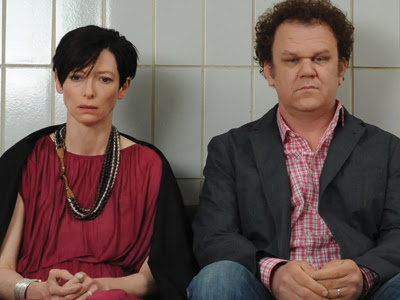 I often bitch and moan about how it's been awhile since I've been truly shook to the core while watching a  horror movie. While perhaps not a direct horror movie, We Need To Talk About Kevin both in film and novel version is still one of the most terrifying things I've voluntarily subjected myself to. I mean really, what was I thinking immediately watching this so soon after finishing one of the most heart wrenching novels I've ever read? Is that same morbid curiosity that drives us to peer into the eyes and brains of serial killers? That same grotesque longing to see actual carnage during a wreckage? And then the inevitable....I've seen too much now I'm going to faint side effect? Yes. Yes and Yes. 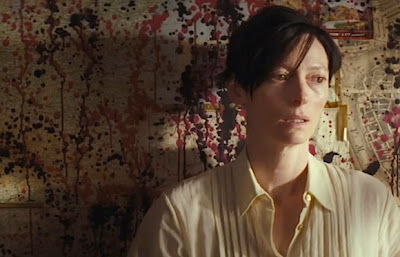 To top it all off, We Need To Talk About Kevin employs one of my favorite movie techniques of all time. RED. And it uses it in a way that is incredibly genius. The amount of actual blood in the film is actually quite low. Instead, our eyes are ravaged by this constant presence of the color red. 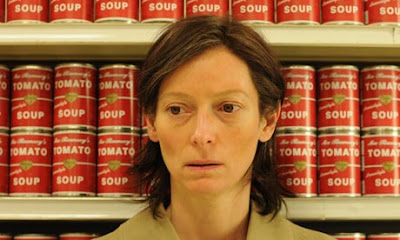 And not just you know.. red...but... RED! This is full on, Suspiria style, paint red, RED. The red, the color red in this is so violent that it practically makes you think you're watching the most violent film known to mankind. And you are in a way. Because the violence in We Need To Talk About Kevin isn't necessarily up in your face. It's more like it's inside of you, taking hold of your heart and soul and ripping it out of your mouth. This is not a joke and it's not used to entertain. This my friends----is the terrifying horror of reality.

We have the same brain, I'm tellin' ya.

I really enjoyed your take on the color red. It was right there in front of me, and when I read what you wrote, it all came back to me in a "whoa" sort of way.

This film was deeply disturbing on so many levels.

Quick...what am I thinking right now? If said "tacos," you'd be correct.

I'm really excited to read the book, since I LOVED the film. And holy effers, you didn't think the cinematic Kevin was evil? That was my only real problem with the film. I thought he was a tad TOO Damien-esque and thought it would have been far more powerful if we also saw him put on a charming normal show for his dad and others. I think the film was entirely from Eva's point of view, but I wish that either that was a tad clearer or that we were given the 'normal' look of things just so we don't watch saying "THIS KID IS THE DEVIL."

For me, I think the deep disturbing thing is Eva's responsibility. It's not that she was a bad mother; it's that deep down, she never wanted Kevin. She spends years trying to convince herself she did, but Kevin was somehow born knowing and no matter how hard she tries, he will always know.

A British friend of mine recommended the book to me when it won the Orange Prize, and I devoured it. Then I told everyone I knew about it, especially anyone contemplating having a child (here's a cautionary tale for you). In retrospect, that move was a little harsh, but it counteracts some of the "baby madness" in our culture right now. I also thought the film was terrific, although the book seemed to give Eva more of a voice, and I thought the film made her EVEN MORE of a victim. Both are pretty damn harrowing. Awesome blog, BTW.

Good review Andre. This film is so disturbing, chilling, and at times, very hard to watch but it’s terribly tense with a near-perfect performance from Swinton, who I usually don’t like but here she’s absolutely amazing and definitely deserved that Oscar nomination.

You just got me to bump this movie to the top of my Netflix queue. Looking forward to it, thanks!

Thanks but Ill pass on this one maybe for something more upbeat like requiem for a dream.

I actually have this movie in my queue but have not watched it yet--the plotline is what interested me too. Will have to read the book first (after I finish Shock Value by Jason Zinoman, which I am currently reading and enjoying), since I'm always on the lookout for a good book as well :) Thanks for the review!

Emily-- the book is like a onion basically. Well it's not, I just like to use that analogy whenever I can.
The book definitely shows you both sides to an infuriating point though. Something will happen that is so obviously Kevin's fault and the Dad will always be like but there's no proof, why would Kevin want to do something like that blah blah blah. It's sooooo maddening.

Kevin is much more satan's child in the book because they do show they evil duality he has and that creepy ability to act sweet and charming in front of others, and still menacing and evil in front of Eva.

I will say, the book is also entirely Eva's point of view, the whole thing is actually her writing letters to her husband. Recalling memories from the past etc. In that, sub-conscious realm of her mind we actually find all these insanely interesting tid bits about her that do make us question whether or not she isn't just a little bit of a sociopath herself. It's thrilling actually how complex the book really turns out to be!

heh i like how you write a review about a movie/book that has a kid pour draino in his little sisters eye and you get comments like "cool cant wait to put this to the top of my netflix queue looking foward to it!"

The fact Tilda wasn't even nominated for an Oscar for Kevin proves how useless the Oscars are.
I'll PM you my spoiler alerty questions.
This one just makes me glad I don't have a child.