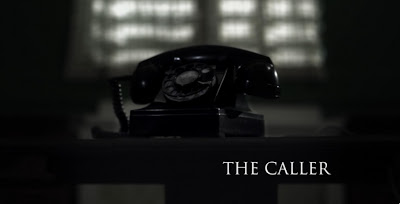 You may not know this about me, but I used to have a very, very strong phobia. No, not a phobia about sharks. Or clowns. Or....old ladies. Or spiders. OK OK I know I have a lot of phobias. I'm scared of several things, it's what makes me stronger.. anyways no this is a phobia that I don't believe I've ever talked about before.

I used to be very afraid of the phone. Dun dun dun! It's true. I used to completely shut down when I needed to make a phone call. I'm better now although there's still a small part of me that clams up when I hear that ring back tone. The anticipation, the not knowing what to say. Why was I so afraid of it? Probably because I had a strange feeling that someday, a crazy old lady from the 60s was going to be calling me and completely screwing up my life. Lucky for me, The Caller is exactly about my deepest and darkest fear. 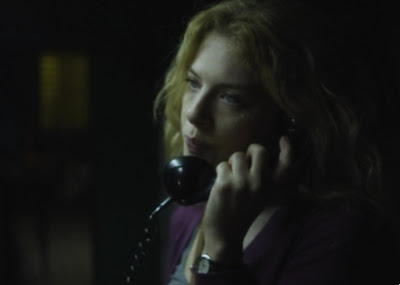 I was dubious about The Caller when I received a press release email from such and such PR Company. It was one of those, "Hi Andre, hope you're doing well! Here's something I think you might be interested in!" Because you know...Jancy Willingham or whatever her name is totally knows me. But that's not why I was dubious. I was dubious because the plot sounded very predictable. A woman receives strange phone calls, yadda yadda yadda her psyche slowly begins unraveling until she discovers a startling truth.
I mean if that doesn't spell out..."She's calling herself from the future" or "She's dead!" then I don't know what does.

As it so happens, that is not the case with The Caller. As I alluded to earlier, this crazy woman caller is actually calling from circa 1960 and with every phone conversation our heroine Mary has with this crazy lady, we realize that the present as Mary knows it, slowly starts to change. Think of it as a completely nightmarish version of Back to the Future that isn't funny. Not that realizing your mother married Biff Tannen isn't a nightmare but you get the picture. 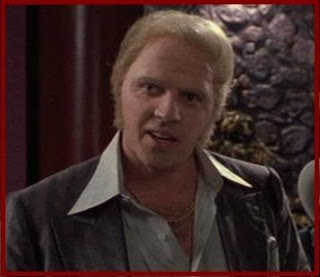 In a complete twist of events, I actually came away quite enjoying The Caller. It was surprisingly griping and creepy--not to mention that it showcases one of the creepiest things ever...lurking old women. 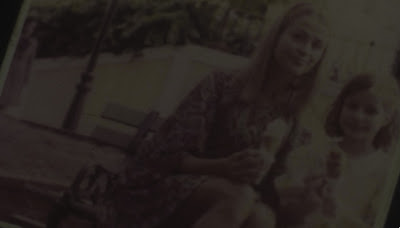 Like Insidious, The Caller uses one of the all time creepiest techniques which is bringing out the old family photos and realizing that such and such scary old woman has been stalking you your entire life. Stuff like that is unbelievably terrifying for some reason. I think it's because that moment in their life has already happened. It's that feeling of realizing how close you had come to terror without even knowing it. Plus old ladies are really terrifying sometimes. 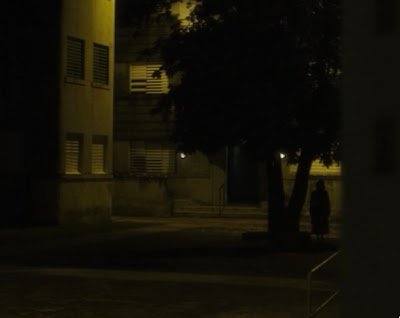 I suppose I would classify The Caller as one of those slow burn type of movies. It's not like there's this constant threat of terror all up in your face but there is a growing sense of dread which I oftentimes find much more terrifying. I also LOVE stuff about time travel, alternate realities etc. And The Caller is all about that. Sure, it may hurt your head at times but it's just enough to really keep you invested and curious as to what the outcome may be.

If there's one major gripe I have it's the very ending. There's not some bullshit twist or anything like that so don't worry. And I suppose I can't really talk about it without completely ruining the movie. So hmmmmmmmmmmm ok we'll do a SPOILER ALERT. LOOK AWAY NOW. 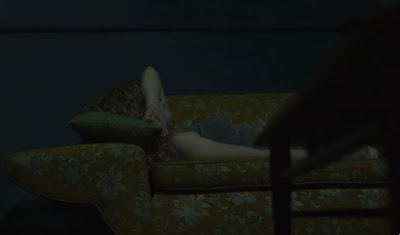 Throughout the whole movie there is the threat of both the crazy lady, and Mary's abusive ex-husband. Once the climax happens and Mary as a small child kills the crazy lady you would think there would be some huge life changing revelation. Like in Back to the Future where George finally stands up to Biff which completely changes his life for the better. I figured that once the crazy lady was dead, Mary's ex-husband would disappear. I figured that because she conquered such a demon early on in life, she would be strong enough and smart enough not to even get involved with a psycho wife beater. Apparently that is not the case though, and Mary's husband comes back at the end just to knock her around a bit. That just bothered me! She killed an old lady with a piece of glass when she was little. Can't we give her and our audience some piece of mind that says--yes ladies, things are better? Mary's life is better now?! I guess not.

Yes, there are some things that don't altogether make sense when you really dissect them. But I think for the most part I am able to glance past those and able to enjoy the movie as a whole. It's a solid entry in unpleasantness and creeping dread. A solid entry in creepy old ladies. And a super solid entry in phone terror.
Check it out if you're into those kinds of things, I think you may be pleasantly surprised.
Posted by Andre Dumas at 3:56 PM

That stuck in my head too, how she didn't really get that rush of triumph or release from her douchenozzle husband. Can you see any reason for it? Because it just seemed like a "uhhhh, oh well" thing to me.

Not too sure. I guess probably just because they wanted a way to kind of have everything come full circle? Like, the crazy old lady may be dead but her craziness still lives on in other people? And of course to shock people a bit. I always prefer the horror movies that end simply with credits (no jolting surprise or revelation) but those seem to be few and far between these days.

You bring up a good point with how certain things changed but something like having the ex-husband around stayed concrete.

I thought it was a nice little film, slightly flawed thought it may be.

And thanks to that picture, I now have Biff Tannen's voice in my head: "God bless America" or "Get the hell out of my car, old man!"

Check out Timecrimes if you haven't already. I think you'd dig it.

Interesting take and review! I've seen this in the movie queue time and time again but had mixed feelings about it. After reading your review, I may have to check it out - I also prefer those slower paced horror movies that build up terror rather than the "in your face" type horror films! :)

I had the same reluctance as you in watching it. The plot sounded like an AfterDark film, but wow...it was REALLY GOOD! And FUCK old ladies man. they're the WORST!

Regarding the ending--SPOILER!--I'd say that putting the retroactive rule just doesn't work with the film because if you go that route, then there are just too many things that don't add up. REgardless, I found the final shot PERFECT because if you think about it, Mary was the one who gave Rose the idea to kill Bobby back in the day, then of course, Rose hid him in the walls. Now here you have Mary doing the same exact thing, which is somehow disturbing AND empowering. Plus you get the question: killing Bobby set Rose down this path. How will killing her ex affect Mary's future, and future of others? I dig it more as I'm reasoning it out...