Everyone Has the Willies! 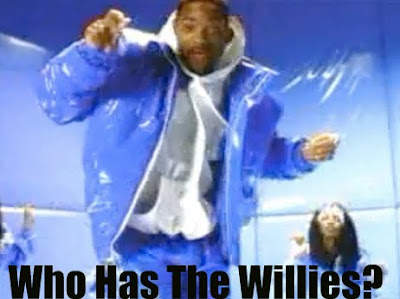 I'll admit it. The main reason I asked everyone to come up with their own top 10 Willy Inducing Moments was to make everyone use the word "Willy" in their title. I wonder how many people thought we were talking about something else. And by something else I mean of course Big Willie Style himself, Will Smith.
So anyways I couldn't be more thrilled and excited by the amount of responses I got to my little challenge. Each list was well thought out and had me exclaiming out loud in agreement. It just goes to show that the concept of creating a list, a universal list of what is considered to be scary is pretty pointless because what scares us is typically individualized. And plus there are way too many scary moments not only in horror but EVERYWHERE that it becomes impossible to place a rank on any one of them. I'm not saying Bravo's 100 Scariest Moments isn't a valid compiling..it just doesn't make that much sense in the overall scheme of things.
So big thanks to everyone who made their own lists, I hope you all had as much fun as I did filling people in on what scares you most. Without further ado, here is a list of all those that participated. If I missed you please let me know! Or if you have yet to do one, and would like to, I can add you later. Remember; don't be afraid to show people your willies....... tehehehehe
The Mike's List: From Midnight With Love
BJ-C's List: Day of the Woman
Chris' List: Fascination With Fear
Emily C's List: The Quest to Watch Every Movie Ever
Mike's List: All Things Horror
Joe's List: From Beyond Depraved
Rick's List: Paradise of Horror
Kristi's List: Sepulchre Studios
LJ's List: A Racing Mind
Liam's List: LessThanThree Film
Unk's List: Kindertrauma
Stacie Ponder's List: Final Girl
Ryan's List: Blanked As Ordered
Carol's List: Craftypants Carol's Fancy Crafty World
Derrick's List: Dead Derrick's Reviews
Dod's List: The WGON Helicopter
Daniel Danny Dan's List: Magniflorious!
Horror Extreme's List
Bryce Wilson's List: Things That Don't Suck
Chris' List: The Horror Canon
Tim's List: Post-Mortem Depression
Pax Romano's List: Billy Loves Stue
Nicki Nix's List: Hey! Look Behind You!
Dave's List: Bloody Terror
Movie Bullstuff's List
Gory's List: A Gory Place

All of those exposed Willies - Jada would smile (and probably even Tom Cruise, from what I've been told).

So many of these moments means so many more movies to add to my Netflix queue!

The only reason so many of us partook (Partaked? Partooken?) is because you inspired it lady. I've come across a few decent topics but because the content was, well, made of poo, I quickly forgot about it.

I'm glad you made the remark about Bravo's 100. While I loved the special and am thankful for it, it was ultimately less about actual moments and more of a movie countdown.

Wow! I am ashamed to say that some of the movies listed on these entries I have not seen! Looks like my next few days will be catching up with my horror queue.

Thanks for including me, btw! <3

All of these lists have been awesome to read!!

This is great! Mine are up at Bloody Terror:
http://bloody-terror.blogspot.com/2010/07/my-top-10-willy-inducing-moments.html

Hey Andre I did my own list, but narrowed it to only include stuff I saw on T.V. as a kid. Check it out...if you dare!

It's so awesome that you got so many people to play along. I was almost starting to forget what it felt like to be scared, so it was nice to recollect all these great, creepy moments.

Love these lists and can't wait to add mine! Congrats on being such a trendsetter!

Wow. That is a list and a half--and I still need to write mine too. :)

Awesome job Andre! I have had so much fun reading these lists! I just posted mine at:
http://zombiesaremagic.blogspot.com/2010/07/top-10-willy.html

Thanks for putting this together!

Here's our list! This was such a great little project, I loved it! http://mendthiscrack.wordpress.com/2010/07/07/gives-me-the-willies/

There. I finally got my top 10 list posted. Here.

Oh man, I'll never get some sleep now! Oh well, at least I finally finished up my list. Yay!

Hey, thanks for the mention -- it was a fun list to make :o) Great idea!