Lately, I've been starting to notice how pleasing "historical horrors" are to my face. I'm not 100% on this, but I'm pretty sure it's because annoying things that happen in modern times won't ruin anything. There's no cell phone cliche, hot babes getting naked, or douche bag brosephs getting drunk and setting their crotch on fire. There aren't even cliched killers--because these were the olden days and the concept of a quiet killer that wears a mask wasn't invented yet. Yes, historical horrors can be a true delight indeed. And although I didn't love Dead Birds very much I DID come away truly enjoying Ravenous, even though Ravenous has the unfortunate misstep of including David Arquette in the cast. And wow, that must mean it's pretty fucking good if even David Arquette can't completely ruin it.
Ravenous takes accounts of The Donner Party and Alfred Packer and uses them to make a surprisingly original story. After surviving a harrowing ordeal in the Mexican-American war, Lieutenant Boyd is transferred to Fort Spencer, a remote post in the Sierra Nevadas. Once there the group encounters Colqhoun, a disheveled man who recounts a horrific story of survival and cannibalism. After realizing someone might still be alive out there, the group and Colqhoun set off on a rescue mission. Once there, the group realizes Colqhoun's story may not be what it seems.... 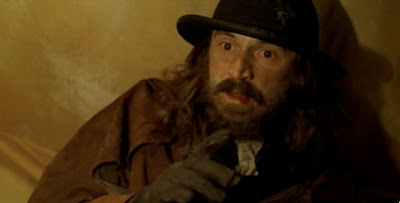 Ravenous in many ways is an interesting spin on a zombie tale. The Native Americans in the group relate something to Boyd called the Wendigo myth--which states that when a man consumes another man's flesh, he takes their strength on and develops a demonic soul cursed by the taste for human flesh. It pretty much is taking the idea of a zombie and making it about 20 times scarier. Zombies may not be a huge threat alone--but living, breathing people who look exactly like you and I are a completely different ball game. Cannibalism can also be seen as a sickness, infecting the person involved in a kind of sickening addiction. The idea of cannibalism goes places that I never thought it would in this and that is perhaps where a great deal of my respect comes from.
Aside from those notions, Ravenous also does one of my favorite things in horror--it makes a non-person a major character. In this instance, it is the environment and the elements that act as a secondary villain. There are some pretty breath taking shots for instance of the Sierra Nevadas that are truly great. The mountains and the vast snowy landscape are so imposing and so powerful. Several shots are set up to show how the human characters are tiny little blips on the radar of the mountains mystique.

It's pretty neat when you think about it.
It's not perfect though. There is a strange shift that happens sometime in the middle of the film. It's like the film doesn't ever know exactly what it wants to be. The threat of the unknown and of the cloudy cannibalism mystique is evident at the beginning, then it rapidly changes to a survivor kind of motif and then it becomes a strange psychological, paranoia thing and THEN it becomes a rampant kill everyone kind of film. None of these really upset me but it is a noticeable kind of continuous shift.

I also wish that it stayed with the same kind of tone it started with. It's like we come to find ourselves in the midst of this outpost, and we get to know these characters. This is kind of spoilery so if you want to be completely surprised then stay clear...... but after we come to know them, and we understand the situation---they all pretty much die. And then suddenly we are left only with Boyd and things feel eh. I loved that scene where all the crazy stuff happens--but in the grand scheme of things I wish everything wasn't so abrupt. 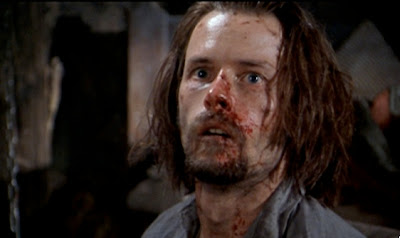 There's also the little situation with the music. I'm still undecided at this point on whether or not I liked the music. Here's the "situation". The music is actually very similar to the jumping of the theme problem. Thematically, it's all over the place. None of the choices ever really seem to fit and yet they worked in this really weird way. It's kind of a Goblins syndrome in that sense, except here it really was out of left field. At least 10 times during this, I had to pause it and make sure that one of those pop-up ads that plays music wasn't infiltrating my ears. Some of it is this weird...almost....video game sounding music. And other times it's comedic and goofy. It was truly interesting to say the least. But not bad--just...interesting.
Now, let's talk a bit about our men, well at least the two of them that I sort of detest. The first is Neal McDonough. If you don't know who he is--he's that guy that always has platinum blonde hair in whatever movie he is in. I don't know if that's his real hair color or what--but I'll just say right now that it bothers me. It bothers me because he never ends up looking like a real person. He looks like some futuristic, CGI interpretation of a person. 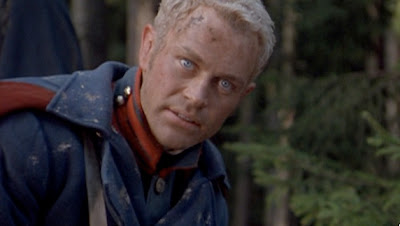 It worked for Minority Report because that was all futuristic and stuff but here? I find it very, very hard to believe that someone had that hair color in the 1840s. It looks like a punk rocker, wearing a period costume for fun.
That brings me to.......David Arquette. First off, I would just like to say that I really enjoyed this movie. I enjoyed it so much that I can get past all the little annoyances-- like upsets in the tone, and Neal McDonough's hair color--but I cannot for the life of me ever forgive the fact that David Arquette was cast in this... I just can't! He ruins it! 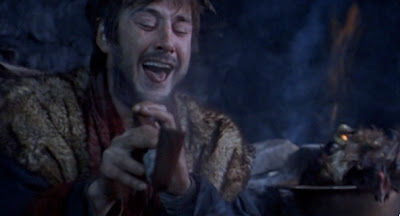 He ruins it with his Deputy Dewey style of acting. He has to butt in there with his funny pot smoking jokes, and his maniacal laughter and he's useless. His character is useless, and it's a tiny part. Anyone who was not David Arquette could have been put into that role and it would have been fine.

Other than that--I loved this movie. It really took me by surprise. There's just this incredible "freshness" about it. Is that the right word? Probably not. But I just mean that it just feels so original and new, and exciting to me. There's a great feeling of unease established almost immediately, the theme of cannibalism runs distinctly throughout. I dare you not to shift uncomfortably during an early scene, where men are eating really bloody steak. Go on, try it.
I don't know. I'm having a hard time writing this week so I'm guessing my thoughts aren't being portrayed as well as I would like. Just know--that you should really watch Ravenous. Daniel Farraday from LOST is in this,

and people eat people, and it's just a really, really interesting topic. You become lost in this for one reason or another. It grabs ahold and while it might take one or two missteps in the 3rd and 4th act--you still can't deny that it has power. It also makes me wonder....does human flesh actually taste good? I thought we tasted bad because sharks always only take a bite and then swim away...? Whatever Ravenous. I still like you it's fine.

RAVENOUS is such a bonkers movie I'm just glad that it exists.

Apparently the director was fired just a few days into production and Robert Carlysle brought hin his friend Antonia Bird to take over.

And you're right about the music. It was done by Damon Albarn from Brit-Pop superstars Blur (you know, the "Woo-hoo!!" song) and, later, Gorillaz.

This movie is all over the fucking place but I have an odd affection for it.

Every time I watch it I always wish it was my first time, when I was so thrown off by the shit that happens, like the spoiler you mention.
Love the music, I tried to steal the feeling of it for my Cannibal short film.

And yeah, it could probably do without Arquette.

Ravenous makes me so happy. Happy in my pants. I couldn't possibly adore this movie more, and I've been meaning to do something about it for my blog. It is so funny and yet so grotesque and all shot very beautifully - by a woman director, too!

*comes out of lurk mode*

Been following your blog for awhile and enjoy the posts.

Anyway, got a question for you and the other commenters: Has anyone noticed a little homoeroticism undertone in some of the scenes?

Not bothered by it; just curious if was done to make the cannibalism a far more personal experience for some of the characters. Or am I reading too much into it?

I love this movie too! I love how it does seem completely original and is not some played out generic storyline. I always wonder why I rarely hear about how great this film is..... I now feel the urge to watch this again, it's been such a long time since Ravenous and I had a rendezvous!

Ooh interesting facts Cash, I had no idea. Gorillaz?! Really. Man....I love that.

Anonymous-- I would be lying if I said I didn't catch a similar homoerotic vibe now and again. It's definitely possible for the reasons you mentioned. The giant bear trap thing at the end especially. I think cannibalism just happens to be a very intimate thing, so I think that undertone completely makes sense. Thanks for coming out of lurk mode!

While I completely understand your irritation with Neal McDonough, I found his introductory scene (the brief shot of him standing in the river shouting) to be pants-splittingly funny.

I gotta agree there. That little cutaway is hilarious.

Kind of sets up the tone of the film, really.

I love this movie, I've seen it a whole lot since i first caught it at around 15. One of my favorite films with a female director too. It has one of my favorite soundtracks. I listen to it on loop when I want to write disturbing scenes in my fiction, particularly this one...

link won't work, but this song really creeps me out. Is called Saveoursoulissa. So, if I have a creepy tone going in a story, I figure listening to this can't hurt.

Brilliant movie,I can't believe it didn't get proper recognition.
The cast is great together,each one of them did a great job playing the character.
Plus,the comedy is unexpected yet very funny.
The movie is about cannibalism,it doesn't get more interesting than this!