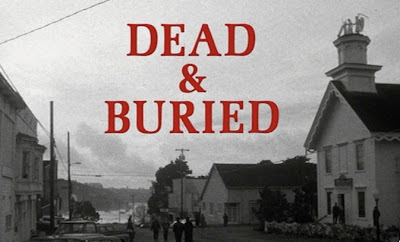 Once, not so very long ago, we at the Bloodsprayer were asked to contribute an article in some way related to Dan O'Bannon for the aptly named Dan O'Bannon week. If you don't know by now, it's time I tell you that when it comes to horror, I am actually a horror newbie. Due to this I had a very small idea of who exactly Dan O'Bannon was. Sure, I knew the big stuff-- Alien, Return of the Living Dead, but what else? In an attempt to gain a better understanding of the kind of legacy he left behind, I asked three of my blogging buddies to tell me what Dan O'Bannon meant to them. Surprisingly, Stacie, Chris and Uncle Lancifer all mentioned Dead and Buried. What was this Dead and Buried exactly? And why had nobody ever told me about it before?
People often use the term "underrated" when they talk about Dead and Buried. I like to use the term "underrated" when talking about turkey sandwiches, Paul Rubens and a nice pair of socks. After watching Dead and Buried, can I group it in that same category? The answer is yes. Dead and Buried is a surprisingly creepy and neat film that even finds itself on the Video Nasties list. By why aren't people talking about it more? Are they lazy? Do they forget how awesome it is? Are they simply uninformed like I was? I think in order to pump up the awesomeness that is Dead and Buried--we just need to get people interested. How do you get people interested, you ask? For starters, I would bring up these two very important points.
1. Grandpa Joe 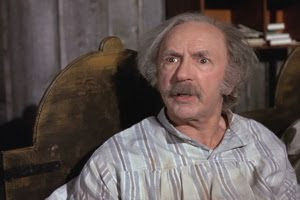 I'm pretty sure I would have been itching to see this a lot sooner if someone had mentioned that Grandpa Joe was in this movie. It was also his last film which is sad--but his role is a pretty amazing one to end on. Maybe more normal people would beg to differ--but I disagree....Dobbs is the coolest. 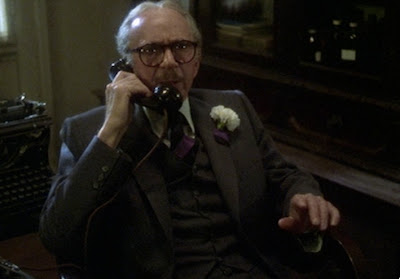 And although I admit that while watching Willy Wonka and the Chocolate Factory I did tend to liken the smell of Grandpa Joe, to poop in a bucket (hey he had to pooped somewhere while being bed ridden), this role has made up for it. So please people that have not seen Dead and Buried---do it for Grandpa Joe.
2. Robert Englund 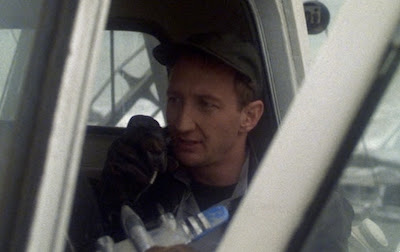 Who isn't interested to see Bob Englund in a movie where he doesn't channel Freddy Krueger? I tend to think that even though Bob had other roles that have nothing to do with Freddy, he still has this hidden spark behind his eyes in each of his roles. Kind of like a knowing wink to the Freddy fans. Here though, he is just a very normal character which produces a curious feeling inside of my heart. In fact, I had to double check it was Bob Englund. It looks like Bob, smells like Bob (lavender and sea breeze) but is it Bob? It is.
That should really be all the hooking you need to do. Once they're in, Dead and Buried will do the talking and all will be okay. They'll become entranced by the gore, the story and the eerie mystery that envelops the seaside town of Potter's Bluff.
Dead and Buried seems to feel like part mystery, part Twilight Zone and part gore fest. Not a gore fest like Dead Alive or anything, but there are certainly some moments worthy of your attention. The film follows Dan Gillis, the sheriff of Potter's Bluff, as he investigates several recent and violent murders. After uncovering some important clues, Dan finds that the recently deceased have sprout up again as residents in the town. How can this be?
One of the more interesting aspects of Dead and Buried is how it uses that little thing called dramatic irony. We know that so and so was brutally killed for instance, and that so and so was in attendance--but Dan continues to interact with these murderers and doesn't realize anything is amiss. However, although we know this key fact long before Dan figures it out--what we don't know is how this is possible. It is this little aspect and how its kept hidden in the dark for so long that made me really, really enjoy Dead and Buried. I love the possibility of a mystery and when that mystery is creepy and kind of absurd--it makes things all the more better.
The gore runs surprisingly rampant and although there are moments where an obvious dummy head was used--the creativity and the final outcome is usually always enough to make up for this. My favorite part, which actually wasn't entirely gruesome now that I think about it---but never mind, never mind, is when Dobbs is shown doing his "art". He takes the female hitchhiker victim who's head had been smashed with a rock and carefully and artfully gets her back to looking normal. 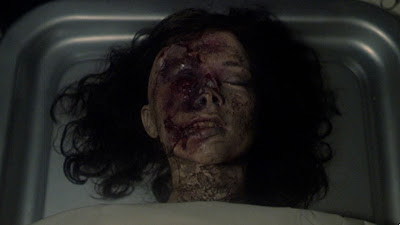 It was done really nicely and strangely made me appreciate Dobbs' work (although I do realize I should be appreciating the special effects work but still...go Dobbs!). There's also a really awesome looking severed arm that wriggles while attached to the front of a car, a really gruesome eye stabbing with a large needle (Which funnily enough should have ended up on both The Mike's and BJ-C's fear exchange lists) 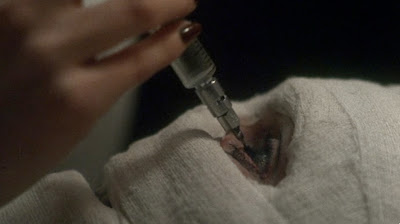 and some gnarly decomposing hands and faces.
What the film really does well however is establish a great atmosphere. The foggy and downbeat Potter's Bluff is such a strange place. It's populated by these people that we KNOW are murderers and yet life just continues on normally throughout most of the day. Practically the entire town feels in on this strange plan to violently kill people and yet we as viewers are much more distracted by the fact that everyone feels the need to whip out their cameras before the heinous crime can take place. 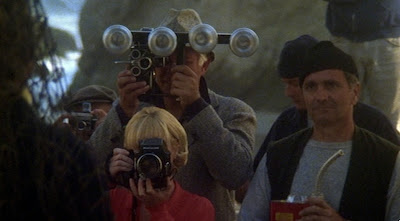 I didn't even notice this before but why was I not more bothered by the fact that they were just randomly killing people? This little detail of the emphasis on the cameras is pretty fascinating.
Perhaps the greatest scene in my opinion, is when that family crashes their car and then ventures inside that creepy house to get help. It's such a great suspenseful moment because we know these people are probably done for. Again, the dramatic irony is rich as we see the ominous shadows of the scary townspeople on the outside of the house and we realize what will probably happen to them. The family however continues to be clueless right up until a rabid towns person busts through the window. 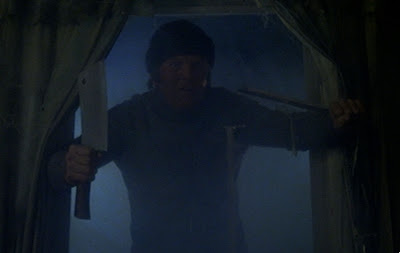 The escape, pursuit and the surprise reveal of the back seat intruder is all done rather well. Although I have been exposed to a wide range of child trauma--I was still almost fearful of what would happen to that little kid.
The one confusing bit about all of this is that even though we see the family escape--they end up as dead alive town people anyways (or at least the little boy does). This makes me wonder if something was perhaps cut out of the film--this would explain its inclusion on the Video Nasties but who knows. There's also of course the unwillingness and the amount of disdain one suffers when they include an onscreen killing of a child, so I suppose it's acceptable. But still, I want to know what happened there.
Sure, there is plenty confusion to be had and a few plot holes regarding when certain people died and blah blah confusing stuff. This ends up not bothering me so much because I find that the premise is creepy enough to withstand the shouts of "Hey! That doesn't make sense *grumble*"
Overall Dead and Buried is a solid inclusion into my horror shelf. The ending and the mystery that eventually gets solved pays off, I think. Maybe you saw it coming, maybe you didn't--the point is that it was still awesome. Sure, some parts may feel a bit slow but I still maintain that the overarching creepy mystery is enough to keep me glued to the screen until the end. And boy, what an ending it is. 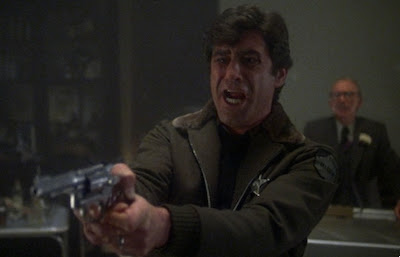 I totally love this movie. I was reading along all happy, thinking "Oh, that Andre is so spot on", and then that screen shot happened.

Ehehe sorry The Mike! But you're suppppose to be all over it and stuff!

I also have a soft spot for Grandpa Joe. I never thought I'd mention him twice in a couple months on my blog (for this movie and a look-a-like in Cronos) and now you too!! Three times the charm! Long live Grandpa Joe!

Hi, Thanks for telling me about this movie. I've seen many of the great classics already, but I still haven't heard about this one. :)

I just caught up with this movie after nearly 30 years of ignoring it. When I say ignoring, I mean accidently forgetting about it. The novelization of this movie was one of the most popular books carried around my high school in 1982.

I was pleasantly surprised to see Dan O Bannion's name in the credits. But I can't see why it made the Video Nasties list either.

Ooh, cool write-up. I heartily agree with all of your sentiments.

Something about Dead and Buried always reminds me of Lucio Fulci movies.

I must admit I haven't read the review, I just skimmed through the pictures and one made me think of my dad. You see, some dudes in an alley hit him in the eye with a bat and he had to operate it out, they injected a needle in his eye just like on the picture, while he was conscious,and he screamed: It's just like you're putting the needle into my brain! Wanna know what they answered? "It's because we are"