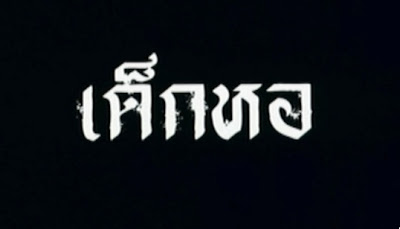 I can't believe I survived for almost 2 weeks without a computer. That's probably the saddest sentence I've ever written (not counting when I asked if it was okay to dip a peanut butter cup into a jar of peanut butter) but I'm not ashamed. Sure I didn't grow up on computers per say, but I do like to think that writing on my blog is one of the few "vices" I have left... not counting when I dip peanut butter cups into a jar of peanut butter and also gin.
I would also like to state that not having a computer is boring and forces you to do things like read or play Angry Birds until you get carpal tunnel in your wrist. By the way, Angry Birds? Fuck you. But hey, I made it out alive and now I'm back here and typing on a brand new and excuse me for saying sexy Macbook Pro. When did they stop making regular MacBooks? I'M SO OLD.
While dwelling in that land called computer-less hell, the movie Dorm was taunting me on Netflix. I was drawn to it immediately due to its suspicious 4 star rating and the fact that it seemed like the kind of ghost story I was looking for. I don't know if you've noticed this but seldom do we see horror movies on Instant Watch with ratings higher than 2. This is why my interest was peaked. However I could not watch it until getting a new computer because I'm so in love with screen grabs and all. So tonight was the night. And Dorm and I became one. 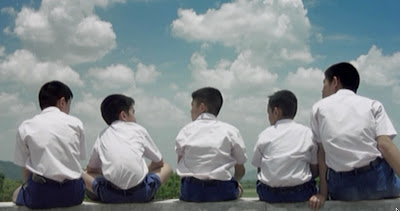 When I first read the description of Dorm I was quite dubious of the storyline. Read it for yourself and decide.
When 12-year-old Ton (Charlie Trairat) transfers to an all-boys boarding school, he's taunted by his peers and terrified by their tales about the ghosts that inhabit the school. Ton is utterly miserable -- until he befriends a mysterious fellow pupil (Sirachuch Chienthaworn).
After I read that description I said something to the extent of, "YOU DUMMIES I bet his friend is a ghost...TWIST!" What I did not know when reading that summary is that yes he is a ghost and that my friends is the whole point. 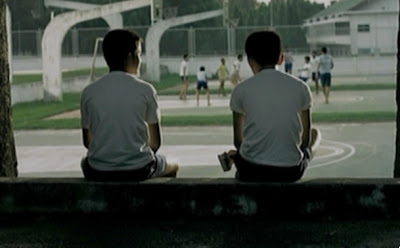 Dorm is one of those movies that I love without apology. Sure it has both ups and downs but generally I found that Dorm is beautiful, sad and extremely well done at certain pivotal moments. There are such wonderful quiet moments of awe in this that it even made me rewind and rewatch scenes over again which is something I rarely do on Netflix because for whatever reason Netflix decides to be all, "Oh let me just take 5 hours to load that scene that you just watched 2 seconds ago".
The main character Ton is one of those rare characters in horror films that we truly love. Although I would say classifying Dorm as a horror movie is pushing things a little but whatever. Ton is quiet, so quiet in fact that we barely get to hear him speak aloud in front of people until about a half hour into the film. You just can't help but feel for the kid. There's one scene where he's eating dinner in the crowded and loud dining hall and he just starts crying, BUT not like sobbing crying. The kind of crying you do when you don't want anyone to notice. The kind of crying that hurts so badly to hold in. This kid performs this feat of acting effortlessly, and the moment is portrayed so unbelievably delicately. 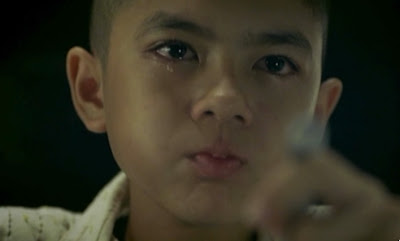 Nothing however tops the greatest moment in the entire film and one that I watched at least 3 times. While out on a school trip to a huge outdoor movie theater, the school boys reenact what they see on the screen. In a sort of Nosferatu/Ghost hybrid, the characters hold their breath to fool the ghost. Apparently by holding your breath and blocking your nose from expelling heat ghosts cannot see you. All the boys mimic this action and suddenly Ton looks at his new friend Vichien who has stood up confused at where everyone had gone. 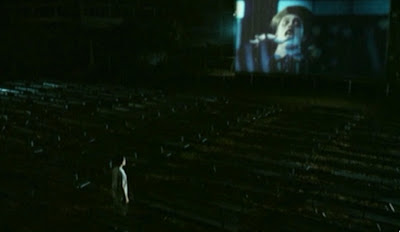 This is the pivotal moment where Ton realizes his new friend is a ghost. The scene is scored beautifully and shot with a careful and brilliant eye. I'm obsessed with it. OBSESSED.
Ultimately the film does tend to veer off into silly territory now and again. The ending seemed suddenly bizarre and the continuity of Ton's haircut really started to bother me. There's also some weird inferences involving why Ton's father sent him off to boarding school. Who was that woman again? As I said earlier, horror is really a strong word to describe this one. The beginning has some Sixth Sense inspired chills complete with sudden jolts in the soundtrack but other than that, Dorm is really just a film about friendship and letting go. 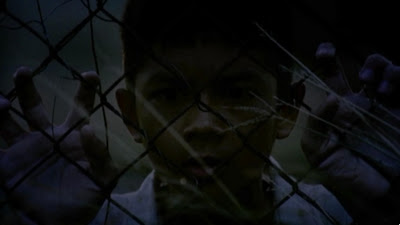 For those of you that prefer a little heart and soul with the horror fare, this one is strongly recommended.
PS is that really how showers work in Thailand? 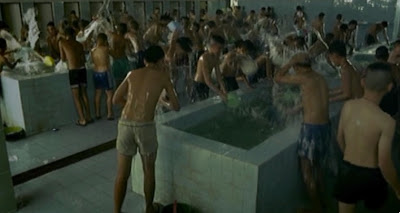 Hello Dr. Theda Here... I am to present you with the "Minions of Misery" Award...
Now for you to list Three things about yourself... First a "dark" Book ... Secondly a "dark" Film and lastly tell a "dark" secret about or your past... I really enjoy your Blog and its Wonderful "hard to find" images from these great films
Drop by a my blog
"Dr. Theda's Crypt"... the Doctor

You never heard of the holding your breath to avoid ghosts thing? I still do that every time I drive past a cemetary. WHICH IS STUPID AND DANGEROUS, but I grew up on that legend and I'll be damned if some cemetary ghost's gonna get me.

Anyway, I gotta see this. Good to have you back, TW!