YellowBrickRoad: All One Word Because This Shit Is Serious

YellowBrickRoad is going to make my head hurt. Not just because my spell check is underlining with RED every time I write the impossibly correct word YellowBrickRoad, but also because it's one of those movies that plays tricks on your mind. This time however, we can't play tricks back which evidently results in a very painful headache or head hurting, or if you're very unlucky--a migraine.

I had heard a few things here and there about YellowBrickRoad and they all had me intrigued. The main one being that it was "creepy". I love creepy. In fact, if I had to pick my favorite kind of horror movie it would BE creepy. Creepy is the good kind of horror that you can't get enough of. It's not gross, it's not zombies, and it's definitely not Saw. Creepiness in horror films is something that several films have been lacking as of late and it gives me a perpetual sad face. Perhaps that's why I came away mostly liking Don't Be Afraid of the Dark. That whispering from the furnace? CREEPY. And in my book--creepiness equals success.

You'll be happy to know then, that the story behind YellowBrickRoad IS creepy. In 1940 all the citizens of Friar New Hampshire abandoned their homes and set off down an unmarked trail. Some were found frozen to death, others mysteriously slaughtered but most of them were never seen or heard from again. The mystery of the residents of Friar has gone unsolved for 70 years but now a team of researchers ventures into the woods on a path to find out what really happened. 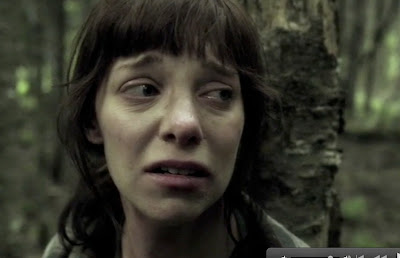 The beginning of YellowBrickRoad is 100% delightful. Filled with a supposed real recording of the only known survivor from the ordeal and a few well crafted "authentic" photographs from the scene of the crime. It doesn't matter here whether or not this actually happened---what matters is that the film does such a good job of building up that instant creepiness that it causes us to instantly believe every single aspect of the tale. I'll even be honest with you and tell you that the recording of the only man who was found alive sent chills up my spine and caused me to put off watching the film till morning.

For the most part, YellowBrickRoad stays on that line of creepiness but it never seems to live up to that initial moment of setting the stage. Things continue to be creepy yes, but that tingly feeling never did seem to return. Still, you cannot deny that the film has some truly creative moments of scares. The premise is very simplistic yet unbelievably bizarre. At some point, loud and creepy music from the "old days" starts pouring out seemingly from the sky and never stops. An old hat is found in the woods, and people's psychological well being seems to fade with each passing day. 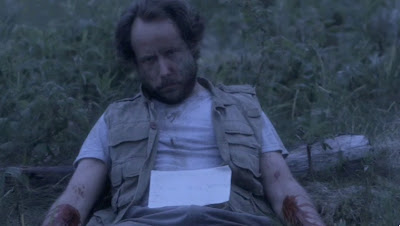 If you want answers out of YellowBrickRoad, you'll have a hard time finding them. This is where you might feel some headaches because here you'll have to think about things and come to your own conclusion about what is going on. Why do people walk on the YellowBrickRoad? Is it to find something or is it to go home? There are several different things at work here and they are all equally intriguing. Of course those of you who need to know things will probably be disappointed by the films end but those of us that enjoy thinking may be pleasantly surprised. 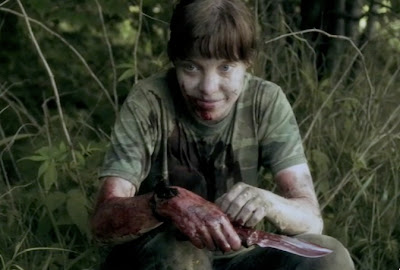 One thing that struck a bit of wrong chord with me however were the few moments of blatant craziness. Sure having a character suddenly snap and pull off another character's leg may seem like a good idea in theory but when matched against that quiet, creepy and psychological motif---it feels like it just doesn't belong. Same thing can be said for that final-ish image of intense CGI work and weird tree demon faces. Not really sure what happened there but if you don't mind I will immediately start pretending that it never happened. 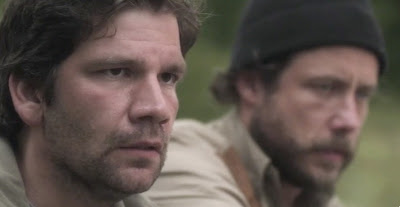 Overall, I wouldn't say I was let down by YellowBrickRoad, but I did feel like it could have held up that air of creepiness a little bit better. Still though, this is a film that does deserve at one point or another to be seen. It's not typical and it's not conventionally scary but there's still something about it that is so intriguing. It could just be one of those movies that we need to see in order to find out what the deal is. What is the deal with that trail? And what will they find? I suppose you'll just have to see for yourself. But don't be mad at me when you get a headache and find out that you do not have any pain reliever around and that you have to resort to stupid holistic methods that don't work.

There was something about this movie I really liked too, and it was mostly related to the creepiness. I love creepy movies as well. The "scarecrow" scene with the girl particularly freaked me out. My thoughts: http://www.thescreamqueen.net/2011/08/yellowbrickroad-2010.html