What the FUCK Old Man/Kid on a Bicycle?

I know I may have mentioned this once or twice before but one more time won't hurt. Seriously what the fuck is up with the kid/old man on a bicycle scene in In The Mouth of Madness? Is that not one of the creepiest things you've ever seen in your life? Why aren't more people talking about this all of the time? Why aren't people standing around the "water cooler" (I drink from the tap but hey, no judgement) and being like "Seriously, what the fuck is up with that scene?". Why aren't more people tweeting things like WHAT THE FUCK OLD MAN/KID ON A BICYCLE. Because that's what goes through my head when I watch this scene.....pure and unadulterated fucked up-ness.
Let's walk through the set up shall we? John Trent and book editor Linda Styles are traveling to an unmarked and apparently fictional town out of Sutter Cane's novel. John has fallen asleep forcing Linda to drive aimlessly through the desolate and foggy nighttime roads of New England. Suddenly she comes upon a boy on his bicycle. 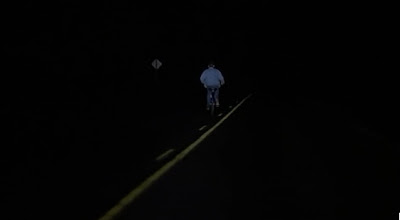 He's pedaling fast and looking like he's in some kind of terrible anguish. 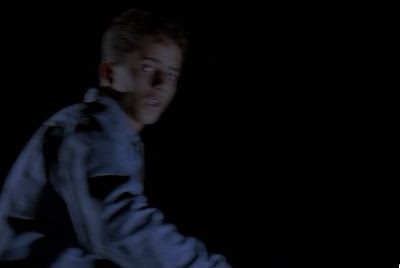 The camera focuses on the playing cards in his spokes. Linda drives on by.

As she continues to drive we see a reflector up ahead, this time coming at us. Linda slows down a bit as the camera slowly brings into focus an old man riding a bicycle and wearing the same clothes as the boy! 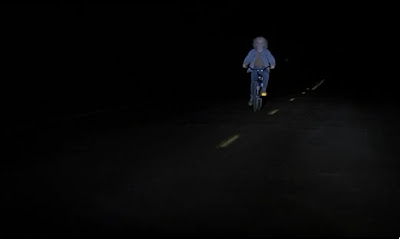 Wait a minute---IT IS THE BOY.

Yeah. Fucked up is right. I've watched and studied this scene over and over again and it never loses its creep factor. It just may be the most gloriously creepy scene to ever have been invented, am I right? It's the perfect combination of an eerie and quiet road at night, flawless soundtrack delivery, and complete surprise. It's one of the more perfect instances of placing the audience directly into a nightmarish landscape. God bless you John Carpenter.
But seriously, what the fuck!!? Somebody should be this for Halloween. On second thought don't because then I'd have to punch you in the throat.
Posted by Andre Dumas at 6:30 PM

Labels: What the Fuck

I always thought that was just John Carpenter's cameo. :-P

I'll be talking about it a lot more now... thanks.

Now I can't get the damn image out of my brain!

Effing creepy! That first pic looks kind of like Gary Oldman in Bram Stoker's Dracula. I would be much more comforted if it actually were...

Omg, you couldn't be more right. I have been creeped out by shit in my time, but this imagine is seriously the worst and has hunted me for years. I couldn't even remember the name of the movie but that old man stayed with me (and you were the first google result when I searched). I am terrified driving country roads at night; once at 3 am in the middle of nowhere I actually saw someone on a bicycle right on the road and I almost had a heartattack. I managed to stop the car a kilometer later and drove back, but the person had vanished. WTF?! This is still haunting me.
Anyway, I absolutely don't get why so many people have never heard of this movie, it's batshit scary.

Loooooooooove the bike scene - in fact this is my favorite Carpenter movie (I know that's blasphemy).

This scene is right up there with the "sleepwalker" from The Sentinel (http://www.youtube.com/watch?v=LhaJk4UlcBo). Skip to the 3 minute mark to see what I mean.

Incredibly creepy scene especially combined with that wonderfully eerie score. The accident with the bike is a nice scare too.

Awesome scene, and one of my favourite Carpenter movies too!

Just watched that scene from The Sentinel - it's terrifying! How have I never seen that film before?

That was disturbing but this movie sucks especially Charlton Heston's character name "sutter cane" its so pretentious.

I loooove The Sentinel. That's another movie that people just don't seem to love enough....! Definitely see it asap Chris.

I agree with Cash Bailey! I've always said it looks exactly like him, one or two more cigarette packs a day.