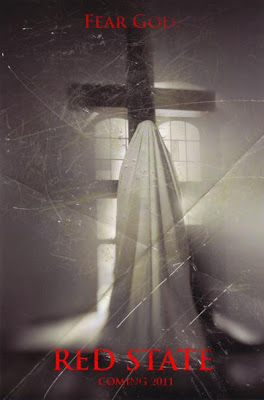 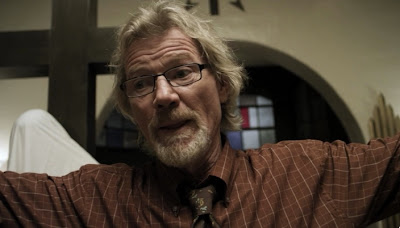 See?
I think that John Goodman is suddenly really old. I think that Kevin Smith must have a girl crush on Breaking Bad. I think that a bagel is theoretically a good breakfast but when all is said and done, it's really just empty calories. In short---I am confused! 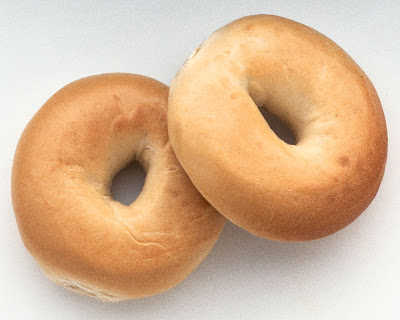 Don't be fooled
I don't know a lot about Kevin Smith movies. In fact I just did a quick tally of how many times I've been truly exposed to Kevin Smith and I'm pretty sure that total is 1. Well I guess 2 now, and if you count that time he starred on an episode of Degrassi--- that equals 2 and 1/4 instances of Kevin Smith exposure. Oh well, we can't have it all I guess. In truth, I've been a tad turned off by Kevin Smith as of late and all of his plots to charge people a million dollars* for a ticket to see his movie. Not everyone has a million dollars okay Kevin?
*Not really a million dollars, but it was enough to make me scoff.
Anyways, Red State was supposedly a completely different film for Kevin Smith. Not that I would know or anything but that's what they tell me. The good news is that I think my lack of insight into the work of Kevin Smith puts me at an advantage here. That's right no bias on this woman. 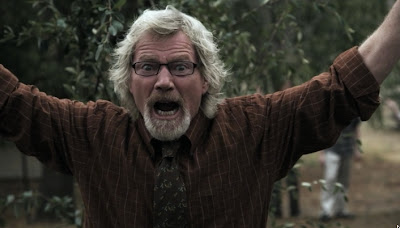 So. Red State. Based loosely on that wacko Fred Phelps, Red State is about a nutty religious group that blows things way out of proportion. They like to kidnap sinners and gay people and kill them and they also have an entire room full of machine guns--because we all know that ultra religious people are living and breathing hypocrisies. After a ritual kidnapping and slaying goes wrong however, all hell breaks loose and the shit really hits the fan.
Contrary to popular belief (my belief) Red State is not a film about religious zombies and/or a rampant free for all where the religious group takes over the entire town and everyone gets all sweaty and bloody. I blame the posters. Red State is however extremely gunny, which is a word I just made up and it means, that there are a lot of guns. A lot of gunfire, and a lot of crazy religious nut bags shooting at cops and calling them cock suckers. I really did not expect this to be so chaotic but I suppose it's all part of the appeal. 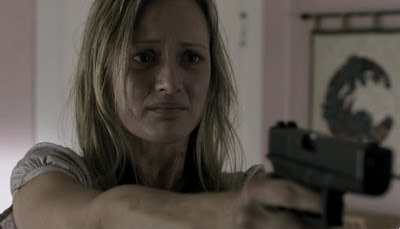 I will say that it's pretty obvious during Red State's running time that Kevin Smith has a strong opinion about both religion and government. There's not really a good side to anything here--and as much as we want to be on the "good guys" side, I think you'll find that it's tough to figure out who that is. Although I will say they don't call him John Goodman for nothing. HA. P.S. Why doesn't John Goodman feel that it's necessary to wear a helmet in times of religious skirmishes? He was really getting me worried. 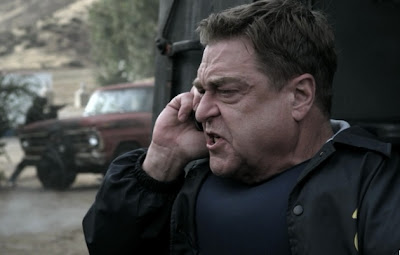 So yes blah blah who is the good guy? Blah blah, innocent people are being killed either way. Blah. I guess I'm kind of over this whole message in a movie thing that happens sometimes with films like this. It's not like Red State is particularly enthralling either. To me it often times felt like it was coming to a standstill. I was also let down by how things played out there at the end. Things felt very sudden and rushed didn't they? In fact, a lot of the movie felt rushed. It felt like Kevin Smith had all these ideas and all these little inputs of commentary and irony but they didn't feel like they were fleshed out.
I may not know a whole lot about Kevin Smith as a filmmaker, but I can say that I think he's one of those directors that dwells more on underlying messages than he does on actual film making and the art of it. I guess I'm mostly just having a hard time accepting this extreme view point. It's like the movie was a decent critique on the hypocrisy of the Church but then it just morphed into this sudden bout of ridiculous diarrhea and guns. People like that I guess--but didn't anyone else feel like things got a little too unnecessary? Oh wait! That's what religion is...... suddenly and ridiculously unnecessary. I get it now! 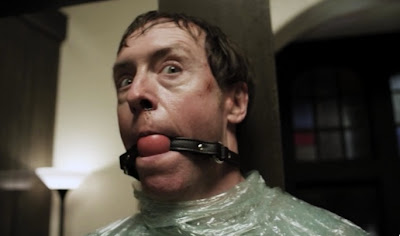 I understand what you're saying completely, but I really liked Red State. It did feel like the plot kinda stopped for a long time, but I enjoyed it regardless. I know the message in this film was really obvious, but since I agree with the message, I didn't mind. I'm just glad somebody had the balls to make a horror film about this, especially when the WBC is so lawsuit-happy.

This is a very okay movie. It has some good stuff but it's lazy script and piss-poor ending really let it down.

I'm a big Kevin Smith fan and I was expecting something great.

I went and saw this at radio city on kevin smiths tour of the film and if it wasnt for the q & A with john goodman and the cast afterwards i woulda felt ripped off.The movie didnt sit right with me it was just mediocre at best.

I think it was quite ok. I'm not a Smith-fanboy. I hate him as a person and I have only seen 2 of his movies prior to Red State.

Well, Apart from the muddled script and the fact that this is NO horror film, it entertained me a lot, mainly because of the great acting, some fabulous dialogue and the hialrious ending.

I love bagels and I'm going to continue to eat them. Thank you. ;)

For me, the even handed and even keeled ending made it all worthwhile. Goodman's dialogue could have easily gone off the rails but I think a certain amount of restraint was exercised (unlike Dogma which I thought was too over the top). That line that he delivers about the group and how they were 'tricked' into thinking God's siren call was ringing out, was poignant. And it made the entire affair, insane shootouts included, all worthwhile.

It's always strange for me when someone says they haven't been exposed to Kevin Smith. I mean, Kevin Smith movies are like Star Trek or Star Wars in that they have this rabid fan following where they have to know ABSOLUTELY EVERYTHING about the films. I'm not exactly one of those - but I must have seen Clerks over 100 times. 1994 was the year of Clerks (well, Clerks and Reservoir Dogs).

Which is a bummer because the trailer was AWESOME.