The Bleeding House: NOT About Periods

The poster art for The Bleeding House has been slowly seducing me ever since I first saw it skulking around my Netflix suggestions. 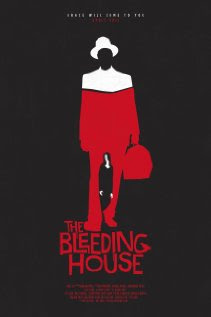 I tried to ignore it and its mediocre 3 star rating but in the end, that cover art just wouldn't leave my thoughts. The movie certainly seems to warrant a 3 star rating---it's neither bad nor groundbreaking, but it does have something about it that interests me.
Of course like all good things that interest me, I have no real idea why. Maybe it's because it's so radically different than most home invasion type horror movies. Or because it really does have something beautifully brutal about it. Whatever it is---I don't hate it. 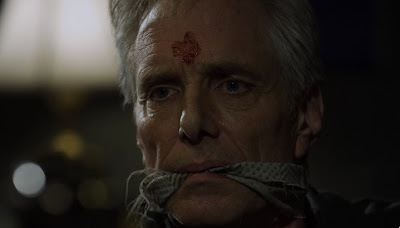 The Bleeding House is not about a house full of girls having their periods, much to the chagrin of my 13 year old sense of humor. Instead, it is about a broken family who one night offer their home to a strange man claiming to be having car troubles. As we soon find however, this strange man has an entirely different agenda planned and that he's religious and speaks with a twang.
I wasn't sure what to think about the uber religious Nick. I knew right away he would unsettle me because I recognized him immediately as the creepy alien in Men in Black who's alien wife gives birth to a squid. Why does he always creep me out? I blame his t-shirt and his soft and feminine features. 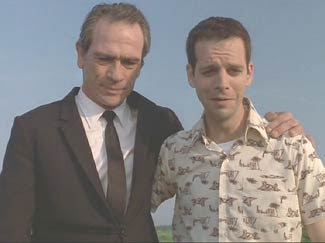 As Nick, Patrick Breen is okay but there's a part of me that feels he's trying just a little too hard. Maybe I find that southern gentleman thing a little cliche but also, why does every religious nut job have to have that painstaking southern twang? Ultimately the character of Nick became a major thorn in my side. I wasn't buying his motives and he wasn't giving it enough oomph to really sell it. 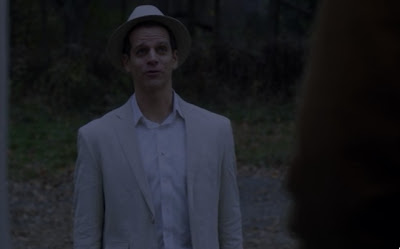 On the plus side, there is plenty of brutality. 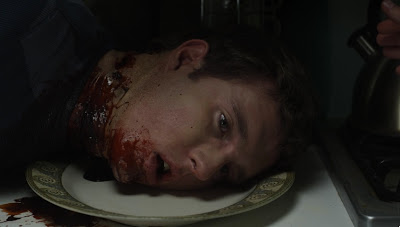 In fact, The Bleeding House can get pretty bloody. There's a lot of throat slashing, a gory head bashing with a rock and the ultimate---death by the complete draining of one's blood. Here is where I think The Bleeding House really hits on something great. The act of slowly killing someone by draining all their blood is quite tedious. 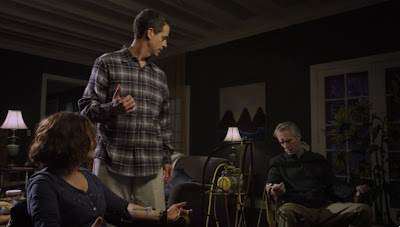 It feels exhausting and carries a certain amount of seriousness with it. Of course, I do feel like that whole process could have been explained better. You never really get a strong grasp of what the purpose of all that was, and it would have been nice to see his craziness come full circle.
None of the brutality however compares to the daughter, Gloria. 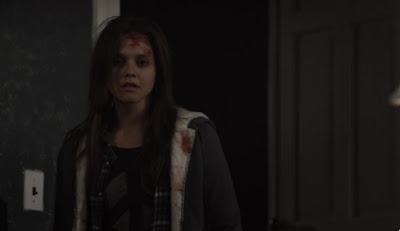 She immediately poses herself as an enigma. Catching birds in boxes, tacking dead bugs to her wall. Is she the reason that all the knives in the house must be locked up? Actually, to back track---the entire family is an enigma. 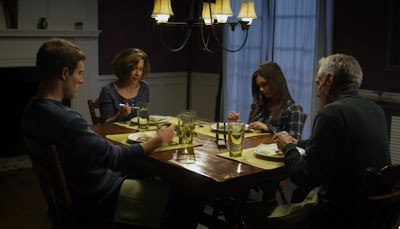 We sense that something is not right but we don't get a true sense of why until much later. There's some hushed talk about a fire, and some vague form of sickness that their family carries. Gloria however is entirely too interesting to let go. Of course, we find out why eventually and it's a bit of a surprise. It's also maybe too much of a surprise now that I think about it.
I guess what I'm getting at is that the surprise about Gloria's character isn't really a surprise at all, if that makes sense. Alright you're right that doesn't make sense. Hmm let's say that Gloria really surprised me because A. she's a girl and B. she's a lunatic. I find that all too often, the sweet yet troubled teenage daughter is a bit of a wet blanket. She seems helpless, and boring, too cookie cutter or something of that nature. Instead, the crazy family member is always reserved for the black sheep brother. Therefore, it was oddly refreshing to get a character like Gloria thrown to us and for once to have her turn out exactly the way that we expect her to.
Ultimately, The Bleeding House is anything to write home about. Which by the way, wouldn't it be neat if we really wrote home about cool things still?
Dear Mom,
Today I ate a sandwich and then I watched The Wonder Years. Winnie Cooper moved away and I got sad. But at least my sandwich was good. Wish you were here
Love,
Andre
The Bleeding House is just alright with a few added notes of awesome here and there. It does end up feeling a bit tedious by its end and the ending battle was a little too dark to really be blown away by. And by dark I mean I couldn't see anything that was happening. No really, what was happening there? So in closing, be seduced by The Bleeding House's cover art if you wish. It won't be the biggest mistake you'll ever make and then after we can have a discussion about Gloria and how she confuses us. And we could also maybe talk about that unsure feeling of whether or not we liked it. AND then we can talk about boys and do our nails. Yay!
Posted by Andre Dumas at 9:07 PM

"Today I ate a sandwich and then I watched The Wonder Years."
That's not a very productive day. That's should only take you like 45 minutes and then you move on to something important or you run some errands or something.

Hmmm...this movie sounds intriguing. I may check it out. I thought there was maybe a made-for-TV vampire movie where they drain people of blood by hanging them upside down (or maybe it's like a Tale From the Darkside ep). I'm sure Amanda from Made For TV mayhem knows, unless I made it up in my head.

Overall, I felt just about the same as you did on this flick.

I enjoyed Patrick Breen's performance a bit more than you, though. He may have "tried too hard", but that resulted in an over-the-top performance that I really enjoyed.

Netflix REALLY wants me to see this movie but I'm not big on invasion horror. But if I watch/review another haunting film my boyfriend may flip. Maybe I'll give this one a shot.

It is afterall a movie, a movie I really enjoyed. Patrick Breen's performance was brilliant! And Alexandra Chandro proves herself as more than just a soap star, {what a performance}I try and not take all the pleasure out of a film by over analyzing it, I just enjoy the film for what it is, entertaining!!!!

Hmm, I also added this to my Netflix list because of the cover art....and I agree, not great, but at least it wasn't "Insidious 2".