Insidious: That Demon Really Has a Talent For Making Beautiful Masks...

I confess to unfairly judging people and things on a daily basis. Nobody's perfect. Perhaps the biggest one in recent memory aside from my consistent and nasty judgement towards all diet sodas, and also people that drink fruit punch, is my prediction that Insidious would stink. It's not that I'm against James Wan or the people behind Saw----it's more that I'm...against Saw so therefore I am kind of Saw racist. Meaning, anything involved with Saw is in my mind....TRASH!
Insidious however is mostly a surprise. I say mostly because there comes a point where it veers off into eye roll, you've gone too far now territory. We'll get to that later but why don't we talk about the good first......
For starters, it's a pretty neat idea. A boy falls into a "coma" or something like it, which results in a series of supernatural occurrences mostly involving scary people or ghosts performing dastardly deeds. Deeds like malevolent pacing, glaring, and creepy smiles. In an attempt to thwart the ghosts, the family moves out only to find that the ghosts have followed. Yes, you've figured it out haven't you? It's the boy that's haunted... for real son! 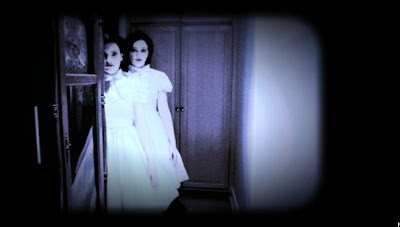 Naturally, my favorite part about Insidious is that it's in the supernatural sub-genre of horror. There are spooky things going on, the story is neat and it involves my 4th favorite thing in the world---astral projection. Not that I've ever made a list of my favorite things in the world...... well okay since you asked:
1. Sandwiches
2. Slipper Socks
3. My Cat
4. Astral Projection
5. Kurt Russell
6. Potato Chips
7. Sleeping
8. Gin
9. Cute Puppies
10. Bacon
Alright well maybe I'm exaggerating a little bit. Maybe astral projection isn't my 4th favorite thing, it's just something I became minorly obsessed with after reading about it in a Lois Duncan book called Stranger With My Face. And before you ask, the answer is no--I still have not been successful at astral projecting. I think you need to be a Native American (?)
Where was I? Oh yes. Insidious certainly provides the chills. The really good kind of chills that creep you the fuck out. Also the kind of chills that make you punch the person sitting next to you which yes, can sometimes unfortunately be a baby or small child. It's also the kind of movie that I can picture watching as an 11 year old at a sleepover and having an absolute cow over. Terrifying old women wearing veils? Black shadowy figures in the corner with long fingernails? 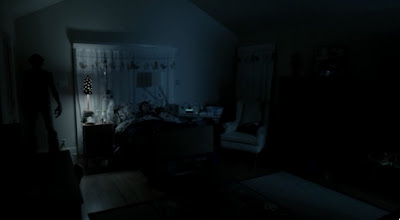 Little boys dancing and giggling and hiding in cabinets? It's like a combination of all my worst nightmares as a child. The only thing missing is a shark hiding in my closet.
Not only that, but in those first 50 minutes or so, Insidious manages to restrain itself into realms of subtlety which is perhaps one of the most surprising things of all. There are scare tactics utilized here that are just the right amount of scare. A perfect example is the baby monitor scene--you expect some scary face to come jump out at you once Rose Byrne opens the door to the baby's room. But nobody is there. Instead of shoving the scare in our face, we get it nicely built up and it trickles right down our spines.
Of course with praise comes one nitpick. Even in the beginning part of the film, the subtleties are still complimented by those jolting sound cues. It's one of my increasing pet peeves about a lot of modern horror today. Instead of having something just be scary or creepy (like the bloody hand on the sheet) the scary thing has to be accompanied by some sort of DUN DUN DUN!!! like tone.

This bothers me because I feel like it's taking away from the scare. Don't tell us we should be scared....just let us be scared. You know?
But of course we can't fault it too much. It's a great first part to the movie, Rose Byrne's impending depression and eventual hysterics. 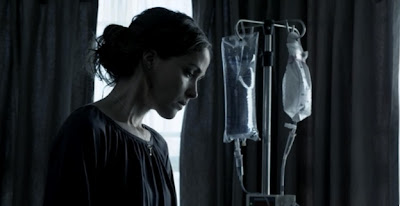 The duality of both her and her husband's coping mechanisms.

And of course the mystery of who all these ghosts are. It also has the benefit of giving several little nice nods to Poltergeist which obviously gets a gold star in my book. Yes, Insidious is largely a fantastic little film.
However............the "2nd part" of the film tends to turn the volume up a little too much. It suddenly begins to feel like a different movie and the kind of movie that I hate. This is where the Saw style or I suppose the Dead Silence style really starts to show itself. 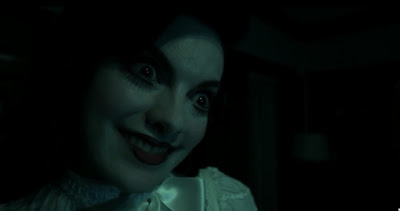 Once the father crosses over to the "The Further" things get ridiculous. Suddenly it becomes some kind of weird Gothic fun house, complete with smiling and doll-like ghosts, in your face scares (literally in your face), and stupid CGI ghost faces and demons. 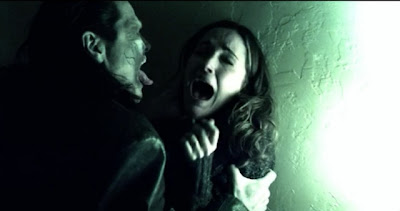 It's like Insidious was this incredible symphony of classical music and then it turned into this rage infested Insane Clown Posse mess. One minute we're cruising along in this nice and creepy ghost story and the next we're watching some CGI demon guy sharpen his nails on an old fashioned sewing machine.
As if that wasn't enough, suddenly the ghosts get all restless and start a weird Coup d'etat of the house. Basically it's just too freaking much. It suddenly becomes this big show where subtlety flies right out the window.

Of course, this doesn't completely sour my taste of Insidious. I still find it to be one of the scarier films that have come out lately. And really, is there anything creepier than the succession of photos where the terrifying old lady is in all the pictures getting closer and closer? 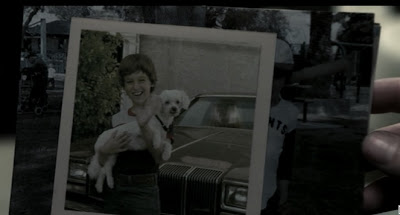 Actually, is there anything creepier THAN that old lady? Highly doubtful. Definitely a future member of the Scary Face Club if you ask me. 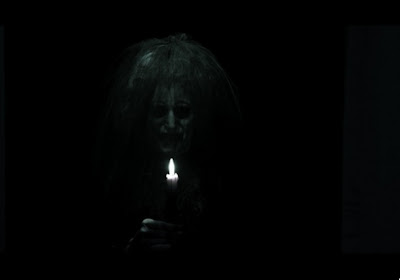 So in closing, don't be like me and write off Insidious because of its ties to Saw. It actually is quite the opposite despite the turn into ridiculous near the end. It has so many great little scenes and so many great jumps and scares. And if you're really lucky you'll watch it when you're all alone and have poor eyesight and then think that the old woman is sitting on your couch when in fact it's just a blanket...good times!
Posted by Andre Dumas at 8:36 PM

the one ghoul with the lamp held up to its face in that picture reminds me of the transexual from the janes addiction video "been caught stealing" truly disturbing. but the moment when the dwarf jumps outta the cabinet at the mom is comedy gold jerry!

No TW! I was so hoping you'd have my back in the "I want to hate Insidious" camp. :(

I agree with a lot of your points - especially the pictures! - I just didn't like the way the filmmakers sold the scares. Seemed forced to me and made me annoyed with the whole thing. And I didn't even hate the ending as much as most.

I think I can probably admit that it's a relatively good movie, it just didn't work for me. And just when I think we're disagreeing, you go and mention Kurt....and totally redeem yourself! :)

Aww I felt that too TH. Definitely the forced scare vibe hence my nitpicking that! It is very annoying but I think after awhile I had to just ignore those sound cues and just kind of fade into the creepiness. Of course there is nothing redeeming about the latter half am I right?

Oh well! We can't be in perfect agreement ALL THE TIME. That would probably get boring!

That old lady at the end of the movie reminded me of that Mary Shaw lady from Dead Silence.

I saw it on opening night without knowing anything about it, other than it being James Wan. I agree that the ending is an absolute mess (I just think the Further design wasn't strong enough and either should have been better or not shown) but I absolutely loved the first hour. Seeing it in the theater was one of those superfun movie experiences because even though the crowd was chomping on their nachos at stereo sound volume, they totally went with the scares and got quiet/screamy when the moment called for it. Totally made the film.

Oh, and I can't agree more about sound cues. I was thinking about this while watching Halloween: H20 the other day. I don't even have to keep my eyes on the movie. I can sit back and write or read a magazine or brush my cat with the confidence that if anything interesting happens, the score will tell me to look. Boo.

I have a whole series of those picture from my childhood. Except instead of the creepy old lady behind me I am sitting on drunk Santa's lap at a series of VFW halls through the year. They scare the shit out of me when I come across them in the photo albums.

I totally tried to astral project myself after reading "Stranger With My Face" in 5th grade! I liked Insidious a lot, but I agree that the last section went heavily into cheese ball territory. The first time I watched it my television was running a bit dark, so it actually made all of the scary touches in the first half that much more mysterious and terrifying. I'll take anything that keeps these guys away from making another "Saw" film.

Also, not to nitpick, but if I don't mention this she might astral project herself into my room tonight and kick me. It was Lois Duncan.

Haha you are right! Why do two young adult writers have to be named Lois? It's too confusing for me.

Hi Andre! This movie was cool, it gave me goosebumps. Later, Love your writing.

I actually hated this one. Well.....okay, hated is the wrong word. I....have seen better haunting movies.

Oh, and that old lady....was a dude. No kidding. Not the character, but the person that played the part......a dude.

I thought the movie was scary. I imagine being in the movie,and you really get the scary sensation.