Well it only took me 3 years--but I finally watched High Tension the whole way through. Actually come to think of it, I don't think I've told anyone (Not even you GOD) what happened on that night so long ago when I put in the High Tension DVD for the first time. Gather round children, gather round. 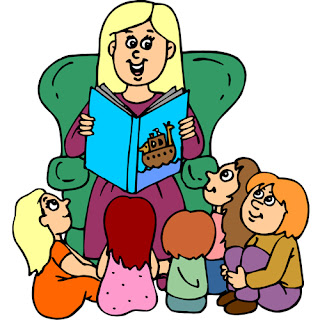 Obviously when starting out in my horror movie watching career, I immediately became infatuated with French horror. I hit all the main stops...Martyrs, Inside, Frontiers, Them--and I was ready to round out the set by watching the infamous High Tension. I wasn't that pumped about it..mostly because I had mistakenly watched a Youtube review of it where the reviewer let spill the ending within the first minute or two of the review. Although I thought it an insanely overdone plot twist, I knew I could not ignore watching the film whether I wanted to or not.

Fast forward to one of those lonely and exciting nights of movie watching. Glass of milk, giant cupcake, cats, slipper socks you name it--I was ready to finally watch High Tension so people could stop bothering me about it. And then, a funny thing happened. I got to the part where Alexia's father's head pops off and I turned it off. Not because it was gory but because it annoyed me. Knowing the eventual turn of events made me incredibly sour and dubious of the movie's overall charm. What was the point I thought? And I didn't try again for 3 years.

Recently, I've been getting a few emails from readers who are kind enough to give me movie recommendations. Almost all of them suggest High Tension and every single time someone does I get all guilty in that "What movie? Oh...yeah I LOVE that movie.....that everyone totally loves a lot but I haven't seen" kind of way. I felt like I had seen it because I knew the route things were going so in my mind I pretended that I had seen it and just never talked about it.

I'm not sure what happened to me between then and now but tonight when I finally sat and watched the movie the whole way through--I became extremely intrigued. Instead of being bothered by the eventual ending I became interested in how we got to that ending. I wanted to delve into the why instead of the how the fuck is that possible? And it totally worked.

I'm going to start spouting off stuff about the ending, so unless you want things ruined you can leave now!

People's number one complaint about High Tension is that it doesn't make sense. How on earth can Marie be driving an old rape truck and a flashy sports car at the same time? How can she hit herself in the face with a spiky mallet thing? Why does she never die?

I've said it before, and I'll say it again---as movie watchers we need to be worrying a lot less about the how and more about the why. Why did the filmmaker choose to present the story in this fashion? What purpose does this method of storytelling serve? Okay, I feel like a college professor now but whatever. I'm serious. Turn off the logic button and just think about the bigger picture. 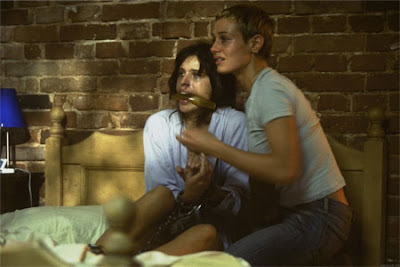 The old rapey guy in the rape truck who strongly resembles Quint is not Marie--but a manifestation of her sexual frustrations and anger. He symbolizes that part of her she so greatly detests. The part of her that thrives on emotions and gets angry at the world because the girl of her dreams is not a lesbian. He also symbolizes a terrorist because he kills a dog for no reason. Oh and a child...I guess.

Just stop taking things so literally audience. Jeez. Yes, the film is great also in that gooey blood and gore way but I think the main drive behind it at least for me, is this more psychological aspect. Has Marie always been a nut job? What is it about Alexia's family that suddenly pushes her over the edge? All these questions and more will visit my head tonight as I drift off into dream world. A magical land where Morgan Freeman buys me sandwiches and narrates my life to make it sound like I have a purpose other than eating sandwiches.

I'm not crazy about the other aspects of the story...it's kind of redundant. Even though it's only an hour and a half long it kind of feels like two hours. There's a lot of hiding and stupid decisions happening. It's not my favorite French film obviously but it does get a lot of points for making me think. 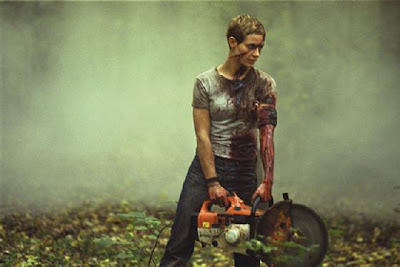 And also now I can join people in actual conversations and say things that are smart and maybe even right. I am also wondering....if it benefits one to know the ending before watching it? Hmmm no.... no I think definitely not. Perhaps it's best to watch it blind the first time--do some jumping jacks to get out the anger and frustration and then watch it again knowing the ending. I think you'll come away with some interesting conclusions and diagnoses on your own. Plus, the killer is totally Quint. Who's kidding who here? 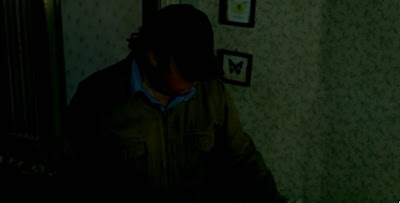 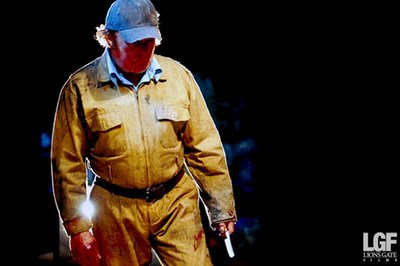 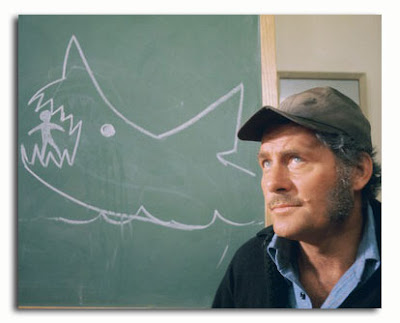 Ha! Love it. Never even noticed the Quint part, but it will never leave me now.

I agree with most of your points too. People need to lighten the heck up on this one. It's not bad enough for all the ending hate and not good enough to challenge Martyrs or Inside. That's about it.

Wiser words have never been spoken!
Basically, I knew Quint didn't really die. He IS Quint after all.

I have to be honest, the first time I watched the movie I was one of those people that hated it. However, I had a revelation similar to your's while watching it a second time and have become an avid supporter. And of course Quint didn't die, he feighned sleep to trick the shark into swallowing him whole. You thought the explosion was caused by the air tank? No, it was Quint.

I love the Quint thing. Can't believe I didn't notice.

For me the car chase is played out in Marie's head. In reality there is no sport's car (Not even sure it's there when she enters the gas station). It's why the car is so ridiculously flash too, because it's her imagination.

It was a good movie overall but what about that part where this 90 lb girl decapitates a guy with a dresser? that literally happened right? could a large man actually rip off a head in that fashion?I thought oh ok she's gonna break his neckwith the dresser but then his head came off at the jaw!

The issue I hd with High Tension was that the opening scene blew the ending for me. It's been a few years since I"ve seen it so I can't quite remember the details, but I watched it early enough to NOT have the ending spoiled, but the very first scene (I think Marie is tied up in an asylum?) told me "this is the killer and she is crazy." I'm not always that sharp at picking up twists, but I got that one and then watched the movie thinking "but how can this be happening if the killer is Marie?" I should give it another shot.

LOVE, LOVE, LOVE this movie. You have to think it is all in her mind. what she is seeing. I think some people don't get that sometimes. There was no chase of course. She actually thought she was protecting her from the man she was seeing which I think actually is a split personality.She was doing the things the man was doing to people. People don't actually know their there all the time. Another personality from what I hear. The only thing I did not like is it give Lesbians a bad rap!!!!

idiots!!! that movie made no sense and the twist was forced

I am very late here, but wanted to point out that in the scene in the hospital shortly after the opening, you can hear the Doctor ask Marie to explain to her what happened the night before (and IIRC, he starts recording her at this point), so what we get is her sugar coated, but mentally disturbed version of why she killed everyone and tried to kidnap her friend. She either thinks she is getting away with this poor excuse or so mentally ill that she believes it in some way, but regardless, the entire serial killer and all his evil doings were just build up to explain why this random guy would show up to this remote farm and start murdering people. It is all a cover story for herself.

The pivotal moment in the movie is when the police watch the security tape of the gas station clerk murder (I believe, I haven't seen the movie in years, but it's one of my favorite movies ever). This is where the real actual events are mixed in with the fake/delusional story of the main character. This is where it confuses people a lot, but that one key part from the beginning ties it all together. This is why Alexia is watching her behind a two way mirror at the end, the Doctors are showing her a little glimpse as to why Marie did everything she did, even if she doesn't believe her own story, she is not well and is very dangerous.

I think it's a great movie and

IS QUINT THE OLD RAPEY GUY IN THE TRUCK? And isn't the killer Marie because her alternate physco personality is QUINT? One of my favorite movies and the soundtrack but still baffled by the ending. Is it all in Marie's mind?

Quint is the guy from Jaws, who got chomped on the boat at the end ofbthe movie. Just watched this movie, that twist blew my mind!! I did not expect that to happen, psychosis of her on a rampage but people were killed which marie believed the killer caused but was actually a physical manifestation of her lust and obsession with her friend. Awesome movie I need to watch again and again.that angle grinder killing was sickening....euurghhh!!!!!
Well worth watching!!!

Don't be a dick. It was good. You're the only one who didn't like it. Stop being so rude and stupid.

Quint is the guy from the film Jaws

Loved the film since it first came out. I have to admit, when Marie described her dream to Alex about her running away from herself, I kinda figured the twist out. Also, the way the killer was sort of "flirting" with the gas station worker, I found rather odd. But hey...whatever, I still love the film.