Visitor Q: Those Nipples Are Haunting My DREAMS. 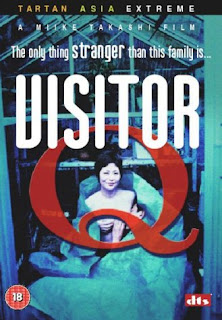 The level of weirdness in a Takashi Miike film never ceases to amaze me and Visitor Q is no exception. But what is perhaps most surprising about Visitor Q is that it starts weird and only gets weirder until your head hurts and almost explodes. I tried to compare it to something like Hausu but I realized it didn't work. This is because Hausu pretty much stays on a pretty stable line of weirdness throughout its duration. Yes it's weird but are we really surprise that a piano would start eating someone, after we saw a head bite someone's butt?
Visitor Q however......begins with something weird and fucked up and keeps getting weirder and weirder. And not in a cool Alice in Wonderland way, where weird shit is awesome and makes you want to smoke drugs and frolic with butterflies shaped like bread and butter weird. 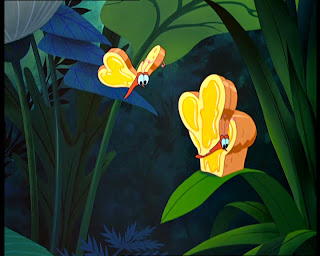 I'm talking.....lactating nipples raining down on you, bathing in a pool of your mother's breast milk 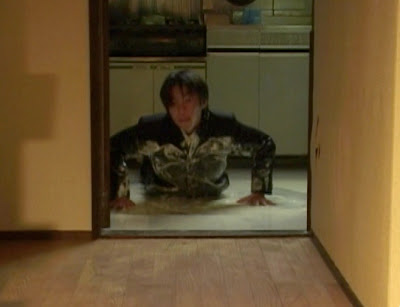 and possible vaginal secretions, having sex with your dad, fucking a dead body, shit on the hand, fireworks in the window, heroin weird. Yeah. FUCKING WEIRD. But also---highly thought provoking.
I've been trying to tackle this idea of a plot for a good half hour now, but I keep getting headaches. There's really not a good way to explain the plot, so instead I'll just mention a few things. First of all the film begins on a high note with an intensely intimate portrayal of incest. We are then introduced to a family that is "broken" in every sense of the word. The son beats up the mother, the father fucks the prostitute daughter, and the house is literally falling apart.
A mysterious visitor enters the picture who doesn't seem to be phased by anything that happens to the family. What follows is the rather insane portrayal of a broken family and how the presence of lactating nipples can fix them. Trust me on this--see it for yourself. 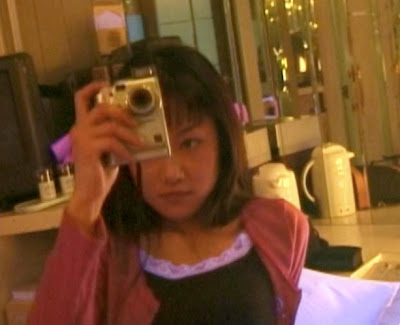 At first, I wasn't sure how to handle Visitor Q. I was repulsed, offended, disgusted and genuinely interested at where Miike would take such disturbing content. I really could not believe how much weirder things progressively became. It's kind of interesting how each thing that happens is disturbing enough on its own but somehow Miike turns it up a notch. For instance, physical abuse towards women is often a disturbing thing to portray on film. Here however the physical abuse towards the mother becomes so much more disturbing because it is abuse wagered at her by her teenage son. He's so unrelenting in his anger and violence towards his mother and the horrible marks that dot her body fill us with this odd sense of humiliation. 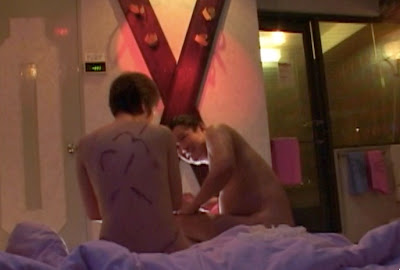 It's awkward in a way to watch because it doesn't make sense. No one else is even raising an eyebrow at what is happening--it has just become this strange regular occurrence.
Further on in the film is a rape. A very spur of the moment, "What the hell is happening", kind of rape. Like earlier, this is disturbing enough on its own, but Miike transforms it into one of the most horrifying things I have ever witnessed. The father accidentally kills the woman while trying to rape her, brings her back to his house and decides he will need to cut her up into tiny pieces. Before he gets that far however, he decides to have his way with her. Fucking dead bodies is nothing new to me. No, I do not fuck dead bodies. But I have seen this displayed before my eyes on a few occasions most notably in Nekromantik and Aftermath.
Here, there is of course another rape involved only this time it seems to be about 20 times more brutal than the initial rape when the woman was still alive. I'm not exactly sure why this moment was so horrific for me to watch, but I believe it has something to do with how realistic it looked and felt. So here we have a very disturbing rape yes, but the disturbing part doesn't necessarily stop there. During the sex, we hear these awful squishy sounds and the father exclaims how neat it is that dead women can still get wet even while....dead. However we soon learn that that horrid squishing sound is in fact....poop. And then as if things didn't need to get any worse, amidst the extremely violent raping action, the dead body goes into rigor-mortis, trapping the father's penis inside of the vagina.
What follows after that is kind of funny and oddly heart warming in a really, really strange way. Let's just say that the family puts their heads together to solve the problem. In any case--that scene alone may have been enough to land it somewhere on my most disturbing films of all time list. Keep in mind that isn't necessarily the most disturbing scene in the whole film. In fact, I have a hard time right now deciding what exactly is the most disturbing part. There isn't one really, because the film does one of those things that I've been talking about throughout this whole journey. There is a big difference in my opinion, between disturbing scenes---and disturbing movies. Visitor Q is of course the latter. 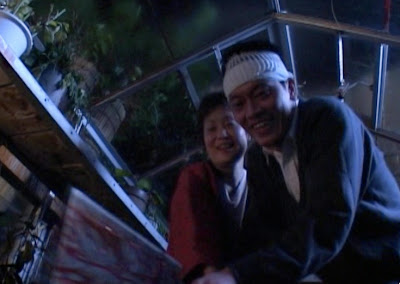 Like most of these disturbing films that I've been watching however, Visitor Q does have a point. In fact, I would say that it has several points, all waiting patiently for you to discover them while your head is still aching from those nipples. The collapse of the family structure, the voyeuristic eye of video cameras and the ever booming presence of reality TV, the how real is too real attitude when people want to expose certain elements of life on TV and news stories, the importance of the matriarchal figure in the family structure---there are many different levels. 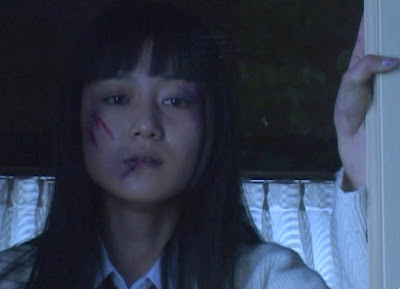 Oh, I wanted to point out this to you all because I feel like I'm in safe place so I'll indulge. Two of the women in this film had these CRAZY huge nipples (Not areolae...but the actual nips). I've truly never seen nipples that do that in my life. This of course prompted me to perform a Google search that went something like this, "Do all Asian women have long nipples". Unfortunately there was no answer to be had because people were too busy shouting cries of racism and idiot. I don't think this is a racist question at all, I think it's a question that would help me sleep better at night. Seriously, what is going on there with those nipples?
Anyways, Visitor Q is a movie that I've been talking about all week. It's also a film that I've been thinking about all week. Which means that it's doing that thing that disturbing films should do--invade our thoughts. It's gross, it's funny, it's depressing and most surprising--it somehow ends up to be heart warming. Who would have thought, that crazy lactating nipples would in the end, have the power to move me? Certainly not me, those nipples are terrifying.
Also, word to the wise---when watching the initial lactating nipples scene, turn the volume down to avoid the awkward accusation by your roommate that you like to watch Asian porn.
Posted by Andre Dumas at 12:02 PM

This is more over seems to be like a film horror story. And ii have also seen this movie many times ago. May be the version was another. And you explained it in better way.

whoever you're , you are such a moron , who can't understand the movie , Visitor Q is not just a horror movie , it has a really big meaning , such a beautiful story , See the ending it says everything about the movie ... the children drink breast milk that they couldn't when they're toddlers. You don't have a sense to feel the movie... you're just a psycho , who has a psycho mind , you should take some medicine , you have a disease .