Super 8: An Open Letter to the World 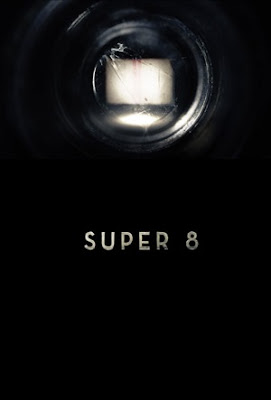 As I came out of the theater after seeing Super 8, I couldn't help but ask the world a question. Technically I asked the sky, but it was really addressed to the world and so I assume that Morgan Freeman (God) passed the question along to the rest of you. The question was: when did we stop simply watching a film? When did we start analyzing and picking apart the movie instead of turning off our minds and getting absorbed into it? My friend once asked me if I found that I had a hard time watching movies and NOT writing about them. At the time the answer was yes. I was in my prime stride of horror blogging, and everything I watched was no longer a movie--it was an opportunity. Even if you are not a film blogger, I find that more and more these days people are exiting movie theaters and blabbing away about how a movie is like another movie. Or how a director is a hack. Or how the themes and the tone of the film did not match up with the story.
Granted, I do talk about those things but technically I am a part of this world and therefore my own question was also posed to me. The point is. Why do people hate Super 8? At some point during the movie I did start thinking about "things". I started questioning things and trying to figure out why other people did not enjoy the film. Before long however, I snapped out of it and from that moment on dismissed any real deep thoughts. I wanted to savor the moment. I wanted to always remember that feeling of being completely absorbed into a film. That moment where you aren't even aware that people are sitting around you. I had heard people talk about that moment and realized tonight that I have never truly felt it until now. Naturally, if you need a definitive answer on whether or not you should see Super 8 the answer is yes. And after some ranting, I'll tell you why. 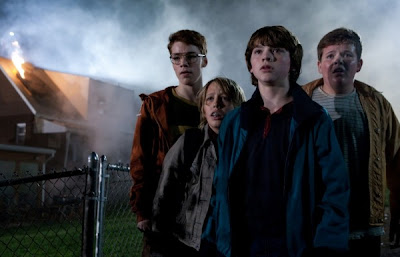 I really wish people would stop comparing movies to other movies based on central themes or characters. I ranted about this once before and now I'm bringing it back. Super 8 is nothing like E.T., Alien, or Close Encounters of the Third Kind, so stop comparing them on a base level. Also, stop accusing Steven Spielberg of A. sucking and B. making the same movies. Why? Because Super 8 is not Steven Spielberg's movie. Sure, there are subtle smells of the Spielberg creeping in here and there, but as an avid L.O.S.T fan, I'm pretty confident in asserting that Super 8 reeks overwhelmingly of J.J. Abrams.
The thing that sets J.J.Abrams apart from just about everyone else is what he puts at stake. Thanks to whatever strange super powers the man possesses, his films and TV shows always end up putting something at stake for the audience rather than the characters. Think about it. If Steven Spielberg's strengths are his characters and his ability to make even the strongest man or woman cry, then J.J. Abrams' is his ability to deeply involve the audience. His mysteries and the idea that something is hidden beneath that film that WE need to figure out before the characters do, is always something that I feel very strongly. It's like I can't get to sleep that night until I crack the code myself. I remember once staying up all night reading a summary of "Our Mutual Friend" because Desmond had a copy of it in the hatch. I was positive that no one but me had thought to do that and that I would be the one to find out some earth shattering clue about the island.
The mysteries in Super 8 are condensed a bit to the point where the window that you have to solve it before the characters is disappointingly small---but luckily it doesn't take anything away from the film. These strange happenings, these mysteries are always presented as trees, with giant roots spanning for miles. Little things seem like nothing then quickly evolve into highly important and life changing details. I love this. I cannot get enough of it in fact and luckily for me Super 8 is crawling with it. 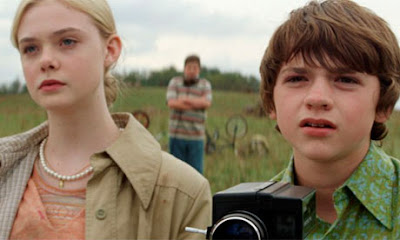 What am I even talking about anymore? Is this even a review? Probably not and I realize I'm not making the situation any better. Whatever. I'm also coming off a two week high of having a real job and actual things to do doing the work day. It blows my mind and I'm not adjusting properly, which is probably why I can't even form coherent sentences and interesting things to talk about. In case you wanted to know by the way, the best way to tell if I'm having writer's block is when I start talking about hookers. 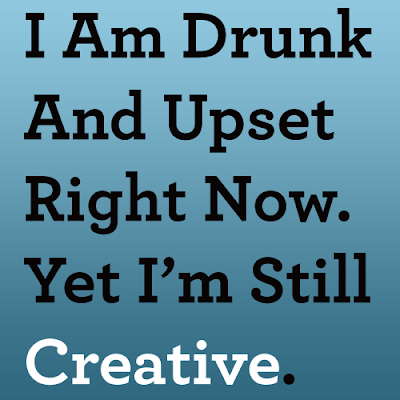 Ummmm what were we talking about? Oh yeah. Super 8 is a great fucking film. I don't care if you have all these important things to say about it or why you think it sucks. You are wrong (according to me and Kurt Russell) (I don't even know if he's seen it, but he usually agrees with me so I think we're safe) and I am right. Go see Super 8 and have a good time doing it. Enjoy it for its entertainment and its mysteries. Enjoy it for its blatant displays of cheesiness or its hearty doses of Daddy issues. Enjoy it for how it reminds you of your childhood or when people still suspected that the Russians were behind everything. Enjoy it for its laughs, for its thrills---but most importantly---enjoy it because it's a movie. Simple as that.
Posted by Andre Dumas at 9:38 PM

I simply enjoyed it.

You raise some really great points. I wish I knew where the cynicism in film-watching comes from, or maybe I don't want to know. All I can say is that when one lets go of all the straps holding one back from fully enjoying a solid movie, it can be liberating.

Sorry but I absolutely hated this!!!!! Worst movie of the year by far!!!

I love you Andre and I want you to be my wife. Wait. I'm already married. You can be my sister-wife then.

I find this equally as difficult. In fact, my wife (the real one), says she enjoyed watching films with me far more than once I started to review them. We'd just simply watch them. Now, even when I'm watching something as mundane as The Princess Bride I find myself dissecting it and I have to slap myself in the face and say - JUST FUCKING ENJOY IT!

@Dod - The cynicism in watching films comes from doing it repeatedly day in and day out and breaking movies apart and then writing about them. When you've finally hit the 100th formulated slasher flick, for instance, it's hard to go back to Friday the 13th part 5 and give it any respect as being a plainly good, fun film. It's not like we choose to be cynical or "haters" as the kids say these days. It just happens. And it's sad. So fuckin' sad. Because I love F13 Part V, and I know there are hundreds of other films that would have been perfectly enjoyable if I hadn't spent the better part of the last ten years dissecting what it means to make a film, and write a good story.

Uh-oh! Someone is losing their critical edge! Just kidding, but I kind of felt the same way. It would have been so easy to bash, and to some degree it's basically pointing out the obvious. But, if you're capable of throwing all movie experience and remembrances of E.T., then the movie is actually pretty good.

You'll have to read my own review!!

Simple as that? Oh but I wish it were. When we learn that this thing here is a table, thereafter a table is what we see; we cannot then see a table and think it instead a antelope, because we are tired of tables.

This critical vocabulary we've taken it upon ourselves to learn and speak in terms of is a trap of our own making, and certainly for myself, I don't know that there's any easy way to unmake it on those occasions when I'm not watching or reading something for review. To be able to turn it off and on like a simple switch would be the stuff of a happy dream... to see or not to see as and when it's convenient...

Alas, like a dream, I can't imagine such a thing ever happening outside of my imagination. Leastwise I can't in my case. Maybe I'm just totally broked? :/

I saw Super 8 on opening night with no clue about what it would be. It made me feel the same way that I did when I saw all those Spielberg and Joe Dante movies as a kid: really, really happy. I immediately recommended it to all my friends who are the same age as me for this reason.

Seems Super 8 is mostly eliciting extreme reactions of love or hate. I'm very curious about this one. cant wait to see it. great review/thing btw :)