Scream 4: Give Ghostface His Dignity Back 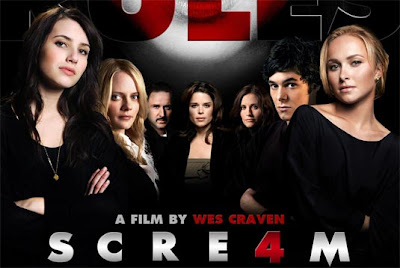 There was an extended period in my life where I wanted to have Scream's baby. I was smitten with Matthew Lillard's annoyingly stupid presence. I got hot flashes when Rose McGowan thought she was thin enough to go through the cat door in the garage. Most importantly however, it scared the crap out of me. So much so, that my first viewing of the film resulted in an all night awake fest courtesy of the metal screw in my ceiling light that suspiciously resembled Ghostface. I was convinced that some lunatic was going to bust through my window at any point during the night and kill me.
Some may say that this is not a healthy reaction to a horror movie. To them I say, yes probably true, although to be fair almost everything in life scares me so I'm really not a good indicator of something going too far.
What I do know is that Scream is a powerful film and certainly one of, if not the best slasher movie of the past decade or so. Because let's be honest---I still want to have Scream's baby okay? Who doesn't?
Due to my blazing love affair with the film, I did my civic duty by watching the sequels and did my best to love them. While I quite enjoyed Scream 2, I felt Scream 3 was leaning a little too dangerously close to the edge of "annoyingly self aware". Now with Scream 4, I'm pretty confident that Scream has completely fallen off that edge and ventured into face slap territory. Which isn't to say Scream 4 is a bad film it's just..............depressing because it reminds me how sad our culture has become. 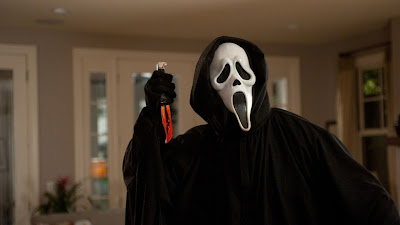 Ghostface in 2011 is like that point in the Nightmare on Elm Street franchise where Freddy picks up his first dirty slang dictionary and runs wild with it. Ghostface has become too whimsy or something. He's too HILARIOUS and witty to really be scared of anymore. Before he had such a menacing and dark quality about him. There was something truly sinister behind that voice and we dreaded hearing it come out the other end of that line. Now? Now we giggle in anticipation of what Ghostface will come up with next. He's basically turned into this. 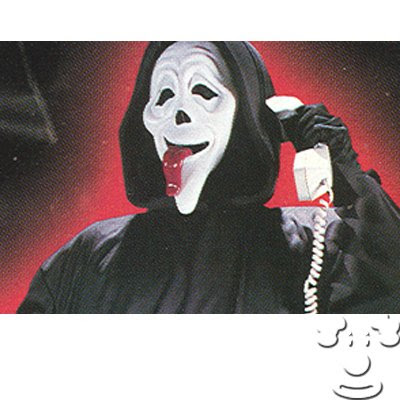 Now, we become less scared of Ghostface and more bored with him. Now he just seems like an annoying person on Facebook who thinks that yes, the world does want to know about his loneliness.

In fact, that's the whole problem with Scream 4. It's not scary. And I'm not just saying that because I am no longer a child who easily spooks. Scream 4 is just an exercise in trying to appeal to the new generation of horror fans and being annoying about it. Not that most horror movies don't do that, but there's something so infuriating about implementing Facebook and Youtube as valid plot developments in a movie. Sorry, I mean in any movie that is not called The Social Network.
I know we need to update things and make them cool and current, but didn't anyone else feel like they were trapped in a mall throughout the duration of Scream 4? Why does everyone seem SO LITTLE? It's like when you go back and visit your high school after you consider yourself an adult. The kids look about 10 years younger than you did and to top it all off....the cafeteria tables are smaller. Okay, okay I know it's all in your head but that's what I felt like while watching this. It felt weird. And creepy. Like grown men watching the little league championship on ESPN. 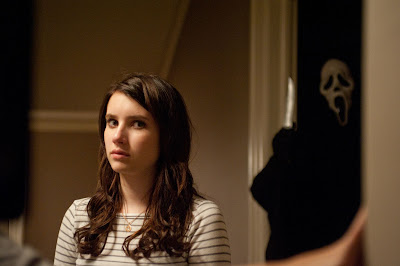 None of this however compares to the fact that the ending reveal of the killer is so outrageously stupid and....stupid. I'm not joking, it's the worst! I was so appalled and annoyed when it happened that I actually did an eye roll at my cat so that I could share with someone how annoyed I was. I really just don't know what to say about it.
Scream 4 isn't even that bad of a movie but that reveal really just killed it for me. There are even some decent and well done things happening throughout here. Creepy parking garage scenes, sad and brutal moments of killings, up close and personal shots of intestines. Plus Sydney Prescott will never fail as a likable and believable final girl for me. 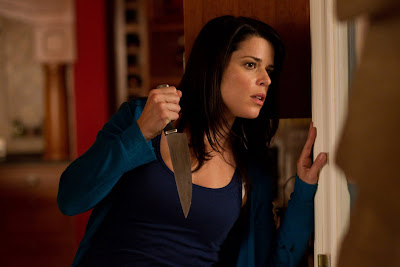 But that ending? MAN! Terrible. Just terrible. Ridiculous. Not believable and worst of all it completely annihilates any shred of respectability that Ghostface had left. I know, I know it's supposed to be a commentary on how much importance we put on Youtube and that whole phenomena of 5 minute famers but come on. COME ON. This is embarrassing Wes. 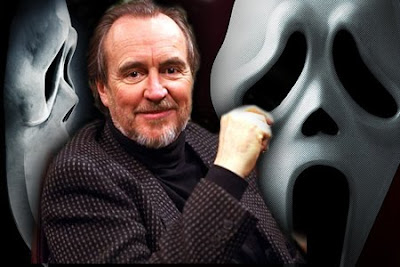 So in closing. Damn it Scream 4. Damn you. You ruined everything and now we can't be friends or lovers.
Posted by Andre Dumas at 2:29 PM

Ive never seen any of these past the first one where it was revealed master thespian skeet ulrich was the killer, but i thought ghostface was a different person every time and i hear "he" turned out to be a teenage girl in this one is that true?

While the scare factor may not have been there, and yes, it was all too self-aware at times, I loved seeing the ensemble cast onscreen again and I still had a lot of fun with it. Def. not the best in the series but I thought it was fun and inventive.

However, I think I agree with you to an extent, because I DON'T like it as a Scream movie. I think they could have changed the title and made it more interesting. But then I think that maybe I'm having the same reaction that people who apologize for Rob Zombie's Halloween had, and then I start to worry about me.

But hey, I can still root for Dewey, and that's good enough for me. So I'd go guilty pleasure with it.

Yeah, the thing that has annoyed me about the Scream franchise since Part 2 they've focussed so much on the "Who's the killer?" endings that it's gotten ridiculous. They've got to find a new motivation every time and end up with convoluted and implausible plot twists.

I wish just once they'd unmask the killer and discover it's some dude with no connection to any of the characters. Just a copycat killer. That or it could be Freddy Krueger. Or the dude from Shocker (kidding...)

That said, I liked Scream 4 and that it was the scariest of the sequels. The ending didn't disappoint me so much because at this point I just expect them to be stupid.

I think my comment to someone at the time was that it felt like a remake of Scream 2. However, I've already forgotten much of the movie. I did laugh at the joke where one of the Stab sequel scripts has a time machine (or something like that). Also, Emma Roberts is totally adorable, but that ends up working against the movie (without giving everything away).

On a side note, I rewatched the movie "Honor Among Thieves" with Charles Bronson and Alain Delon a couple of weeks ago, and according to the credits, you're in the movie! Well, maybe it's another Andre Dumas, but I thought you might want to know that there's a 90 year old actress lady out there who stole your name: http://www.imdb.com/name/nm0241423/

Actually that Andre seems to be a dude. But still, he should realize that you're the REAL Andre Dumas and drop the facade.

It might just be that I adore the Scream movies, and it might just be because of my ignorance of horror, but I loved Scream 4, I thought it was scary, dark and, yeah the ending was a little unrealistic,but I really really liked it! The first Scream will always be my favorite, but I think this one was awesome :)

I actually liked this better. Better than 3 or 2 in my opinion.

I am completely with you in the lameness of S4 and the total non-scariness of the killer. I also thought the whole "new" cast of youngsters - with the exception of an unexpectedly fun and sassy Hayden Panettiere despite her totally weird mom hair - were super lame, up to and including dummy Emma Roberts. It also made me sad that Gail Weathers only got to be minimally badass because I heart her times a thousand million.

Would you have expected anything more from Scream 4? I have no idea why they even bothered reviving this franchise...

But who doesn't want to hear about my crippling loneliness on Facebook?!