The Video Dead and Other Not As Amazing Stuff 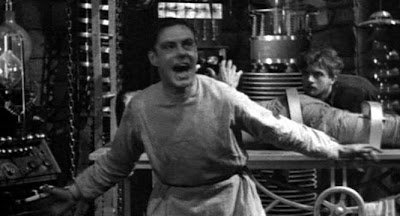 I'M ALIVE!!!!!!!!!!!!!
I know, I know I have some explaining to do. The truth is, things have been pretty crazy as of late. And by "pretty crazy" I mean that I've been extremely lazy and also possessed by the new Zelda game. Dude, you can GO TO THE BATHROOM in the new Zelda game. The toilet flushes. IT FLUSHES! Best. Thing. Ever. Of course the down side is that all I want to do is play Zelda and sleep. Which doesn't leave room for much else--like blogging, watching movies and personal hygiene. Which sadly is the whole purpose of this blog. So for that I apologize. 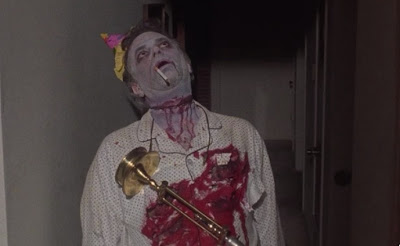 I mean, it's not like I haven't been watching movies. I've been watching parts of movies and then getting restless and giving up.
For example: I watched Chillerama and then wanted to kill myself. I also watched the first two segments of Creepshow 2 and LOVED IT, but then I got lazy and forgot to watch the rest. I also watched Heathers and the beginning of The Cat O Nine Tails. None of these films however inspired me or should I say...motivated me to actually write anything.
That is until I started watching The Video Dead. Just so you know, The Video Dead gives a whole new meaning to the word amazing. This is mainly because it contains the kind of zombies I love. 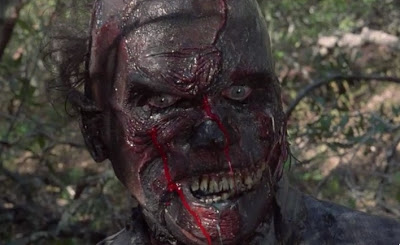 The skeletal, ghoulish looking zombies who laugh at blenders and stick people in washing machines. 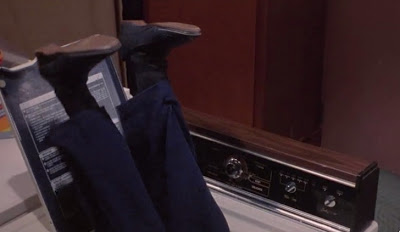 They also favor strangulation over eating people--but most importantly they have a sense of humor. Which is insanely meaningful considering that The Video Dead has an amazing sense of humor as well.
I kid you not, this movie may have officially unseated Slugs as my favorite so bad it's good horror movie. It's just too incredible for words. Oh right the plot. Well, it's about zombies that come out of the TV and kill you! 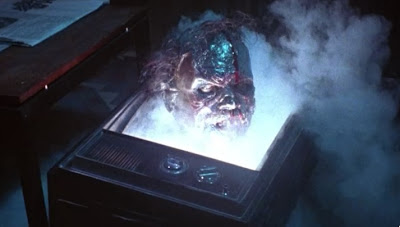 It's pretty much where Samara got her humble beginnings from. It also makes no sense because apparently the TV zombies come out of the TV and kill the guy who lives in the house and then......... 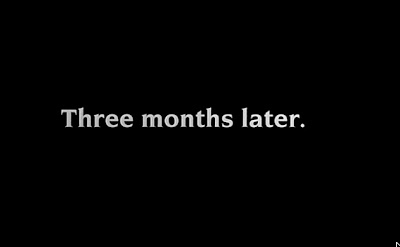 ....They kill more people. What did the zombies do during that three month period? Apparently they just walked around in the woods and waited for fresh poodles to come wandering in? It's very confusing but also---it's what makes The Video Dead so amazing. No explanation necessary. Zombies. TV. Awesome. 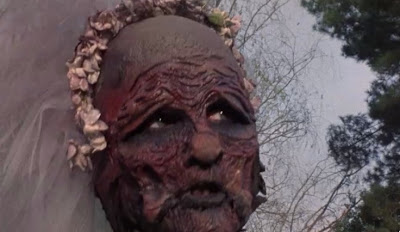 It's also some of the best writing that I've ever come across. For instance:
Guy: I love animals!
Girl: Me too...only I don't count poodles as animals.
Guy: I'm glad you said that...because I really hate poodles.
Later, poodle gets killed by a TV zombie.
Girl: You don't understand. He likes to chase skunks in the woods, and if he finds them he tries to mate with them. Only skunks don't like to mate with poodles, and then they spray him and he really gets turned on.
Oh, it's almost too perfect for words.
I can't really say much else because The Video Dead is the kind of movie you'll need to experience for yourself. I even tried to take a bunch of hilarious screenshots, but it just wasn't translating...I guess you'd have to be there. Which means that you should watch The Video Dead and then come and laugh with me, like a zombie laughing at a blender.
Also, don't forget that The Video Dead also teaches us many lessons. But the most important lesson of all is that you should always keep your picture of Jesus sitting thoughtfully during a sunset, next to your iron and your knitting needles. 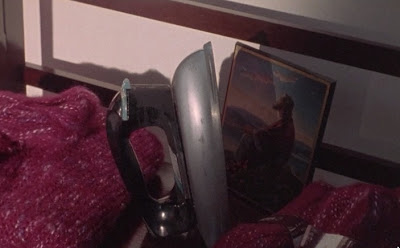 I'd also like to take this moment to tell you that there are some fantastic movies currently streaming on Netflix Instant Watch.
House, C.H.U.D, SLUGS, Vampires, Children of the Corn---get your butt over there and watch some movies. Not that I should be talking because now I'm going to go play Zelda. If you don't hear from me, you'll know what happened. Unless I died, which would be unfortunate.
Oh wait I forgot to say:
What is this poster? 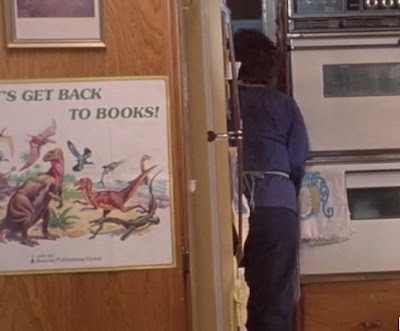 And more importantly: Where can I get one? What does it say? Let's get back to books? Why are there dinosaurs? And why is this hanging up in this old lady's kitchen? I'm obsessed with it. Okay bye.
Posted by Andre Dumas at 8:40 PM

Let's get back to books

We are so twinsies. I haven't posted shit in a while AND I reviewed The Video Dead back in October AND I loved it!

It's obviously a fun, super-entertaining bad movie, but I will say that I was surprised by some of the things that happened to certain characters. For instance, the girlfriend getting killed was almost as unexpected as the brother dying. Shit like that doesn't usually happen in many movies, so I give the filmmakers credit for being so ballsy in such a cheap little movie.

Anyway, I love the character interactions between the older hunter dude and the kid, especially when the kid starts calling the guy Cow Shit in retaliation for constantly being called boy!

The new Zelda is AWESOME!!! That's how I plan to spend most of my Christmas break.

Oh Matt, it was so magical. SO MAGICAL! And I definitely agree with the size of the balls. Plus, the zombies were just cool looking period. Blood oozing out of dead pores? So awesome.

I also love imagining the bride zombie getting into the washing machine. She's such a rascal that one!

Nice write up. I reviewed this movie earlier this year, and came up with a lot of the same conclusions you did. Bad, but enjoyably so. I'd love to get The Video Dead on VHS. That would be, quite simply, amazing.

I was so excited when I saw this was streaming on Netflix.

I remember renting this from the video store when I was younger. For the longest time I couldn't remember the name of the movie where the zombie came out of the TV. It had gotten to the point where I thought I had dreamed that I rented a movie about a zombie coming out of the TV.

This is such a fun little gem of movie.

I love the exchange the brother and sister have at the dinner table wherein she tells him she's majoring in Music Videos and minoring in Aerobics.

Thanks for reminding me about this movie. I got it confused with Video Violence and thought I had seen it but never had. I just watched it today and it is an awesome sandwich with a side of radical chips. The dialogue is amusingly off kilter throughout. I especially liked the conversations between the boy and the zombie hunter. It's amazing that this movie is on Netflix instant in HIGH DEFINITION!