Night of the Demons: I Never Thought About Storing My Lipstick in My Boob...Thanks Demon Suzanne! 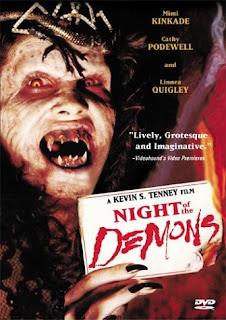 This is another VHS cover that scared the bejesus out of me. Actually now looking back it still does...and within the first few minutes when I noticed that Angela was wearing the same outfit as the scary demon, I dreaded her moment of turning. Turns out it was just hilarious and a little bit scary, but we'll get to that.

The movie is set on Halloween. We meet a couple of characters like the hooligans who like to moon cranky old men with their jack-o-lantern undies, and also our virginal hero Judy. Now the obvious immediate draw for me was that Judy's perverted little brother is DONNIE JEFFCOAT...whom you may remember from a little ditty called Wild and Crazy Kids. 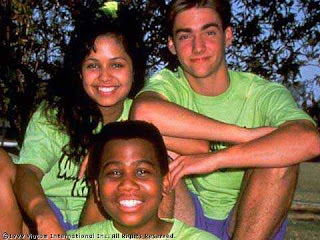 Oooh Donnie. Although he now goes by Don Jeffcoat so look out!

Ok anyways....Angela and her slut bag friend Suzanne are throwing a wild Halloween bash at the creepy Hull mansion, a former funeral home. Once all the guests arrive which is a whopping total of like 7 people...things really start heating up. After a seance mirror game goes badly- demons are unleashed! One by one the guests are taken over by the demons...who will survive and who will turn into a barfy looking demon?

The other great thing about this movie is that all the guys are complete douche bag sex maniacs. Except maybe for Roger who knows to leave when demons might be on the loose. Only Roger has a tendency to save himself over others so that could be a problem- but he comes through in the end.

There aren't really any great kills, but the demons are good enough to make it up for it. I loved when they talked in their raspy deep demon voice and said funny things usually involving the word bitch. The demons also do a bunch of kooky things like stick their hands in the fire and perform provocative dances in front of the fireplace. When all is said and done the movie really brings the entertainment. Don't count on being scared while watching this , it's really only for the entertainment value.

And then there's also the ending scene...which is a little random but also probably the best scene out of the entire movie. Really teaches that old fart a lesson. Although I will never understand how he didn't notice what he was eating but whatever.

I grew up with Night of the Demons and watched it again recently after buying it on DVD after not seeing it for over a decade. It's really slow for the first 45 minutes or so, but I still enjoy the cheese and sleaze of the movie. The acting is legendary in its awfulness, especially the pretty preppy girl. Also, I love Linnea Quigley in this movie...she has the best introduction to a character in a movie, ever!

That would be the one!

LOVE this movie! "Eat a bowl of fuck! I am here to party!" ;) Great review of one of my favorite slices of 80's cheese. It has a special place in my orange and black heart.