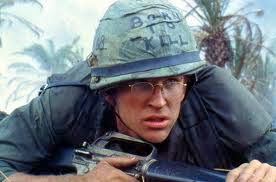 I think I have a problem. My doctor said not to worry but it keeps itching and……okay fine I'll tell you. It seems that after 27 years of existence, I cannot stop watching movies about the Vietnam War. Totally weird right? Movies about puppies sure. Romantic comedies---could be worse. But Vietnam? WHY am I glued to the TV like an oily handprint? Why do I find myself watching the same movies over and over and over again. I'll tell you why. Unlike most other war movies, movies about the Vietnam War somehow seem more relevant to me. The themes, the artistry and underlining message in these always sparks a truly unique reaction within me. 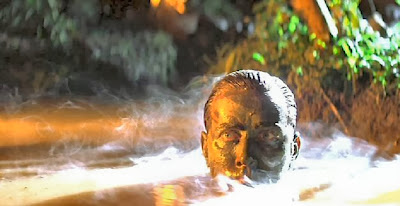 Previously my obsession began when watching Apocalypse Now for the first time and deciding that it embodied my ability to embrace horror movies as a way to disintegrate the fear. Last night, I noticed Full Metal Jacket was playing on IFC and I got all excited again. When I was younger, I watched Full Metal Jacket and thought I felt some inkling of genius. I lacked the real brain power to put the pieces together but the important thing was---the movie spoke to me. Me-- a kid without the slightest knowledge of the Vietnam War aside from what I learned in Forrest Gump.  Imagine that.

So after watching Full Metal Jacket not once but twice in two days, I've come to appreciate it more than I ever thought I could. Putting aside the obvious motifs about military brainwashing, the inherent evil of the Vietnam War, and the duality between love and war---I'm more interested in the 1,000 yard stare. 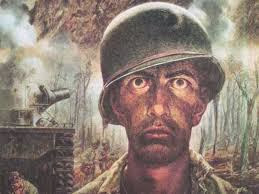 A concept brought to the public thanks to Tom Lea, who emphasized the horrors of war and the lasting effects on the soldiers in his painting, "Marines Call It That 2,000 Yard Stare". The 1,000 (or 2,000) yard stare signifies a kind of deep, traumatic understanding. It represents the idea that there are two kinds of people. The ones who see and the ones who do not. The ones who have been there. And the ones who have not.

The 1,000 yard stare is brought up in Full Metal Jacket when Joker claims he's been in combat--but others disagree citing that he lacks the 1,000 yard stare to have been there. By the film's end, Joker makes a decision to end the life of the wounded teenage girl sniper and then at that moment develops the iconic 1,000 yard stare. It's important to note that after all Joker has been through---the horrors of boot camp, witnessing Pyle murder Sergeant Hartman and then blow his own brains out, 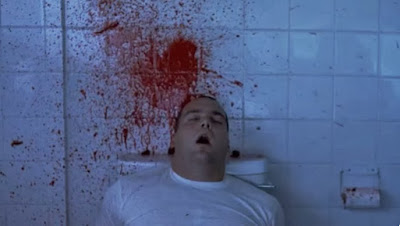 seeing Vietnam Civilians carelessly killed and discarded like an afterthought, his best friend getting shot----Joker does not develop the 1,000 stare until made to look death straight in the face. 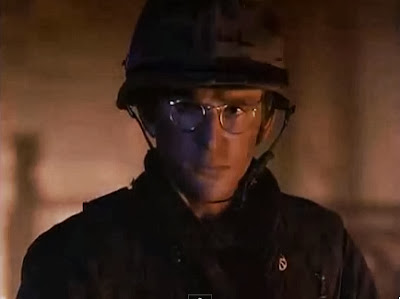 On the opposite end of the spectrum, Gomer Pyle developed the 1,000 yard just by caving in to his own weaknesses. 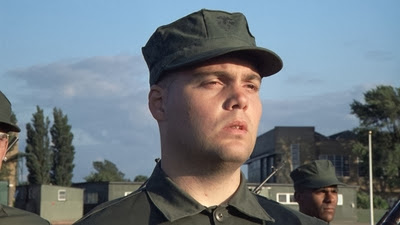 Pyle's essentially bullied until his mind can no longer take the fact that he's stuck in 'a world of shit.' The truly fascinating thing then is that the 1,000 stare doesn't need to be restricted just to those experiencing war and the horrors of combat. It's life fool.  I'm not trying to make light of the depth of the 1,000 yard stare and its true meaning but I'm just saying that I think it's bigger than that. And I think Kubrick was trying to point this out. It can't be a coincidence that one of his iconic filming techniques is dubbed the "Kubrick Stare" right? 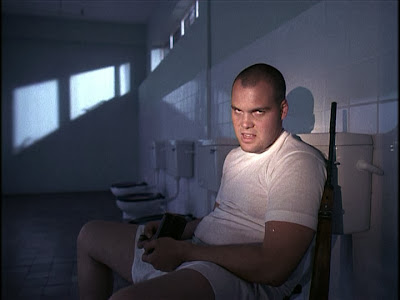 I still think there's something much more chilling about Pyle's 1,000 yard stare than Joker's. I think it's the revelation that Pyle sees himself stuck in a world of shit and unable to get out. A desperation of the mind encountered by those who are suicidal. Joker on the other hand while still admitting he is in a world of shit, grows from it and becomes stronger. Seeing the surrender of Pyle chills me and continues to chill me long after the moment has passed and the credits roll.

The real horror of Full Metal Jacket is that more people aren't like Pyle. Not in the sense that they didn't kill themselves but because everyone else seems to have an ability to turn off their mind and just kill and be OK with it. The end scene for example, after having killed a teenage girl sniper, the soldiers march off into the flames while singing the Mickey Mouse March. 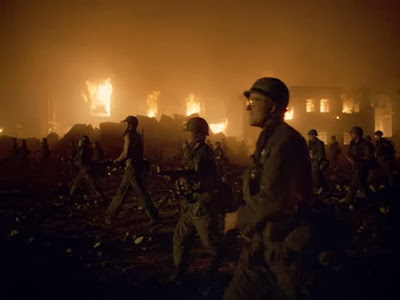 It's a scene so jolting that I instantly compared it to the end of Salo. The scene where after senselessly torturing a group of children and teens, the soldiers start up a friendly waltz with each other--blissfully ignoring all the crazy shit they just did. It's enough to make you crazy. And I think that's at the heart of the sadness of Pyle. The ability to realize that you're not made of what they want you to be made out of.

Clearly I've lost my train of thought and am just rambling now but that's what happens when movies about Vietnam and I get together. It's like an Italian Horror movie. It starts out making sense and then all of a sudden, a man is dressed as a woman and a monkey walks in with a telephone, while a midget recites poetry.

So, apologies for this rant. But my mind is doing this crazy thing where it can't stop thinking and wondering and loving and battling. Life man. Life is hard. You've either seen it, or you haven't.  The trick is---what will you learn about yourself once you have seen it? 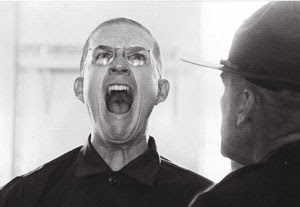 Anyone who runs is a VC. Anyone who stands still is a well-disciplined VC

Andre, this is one of the best things you've written.

FULL METAL JACKET was the first movie I bought a published screenplay for. Actually, it was really just a transcript, but I read that thing and watched the movie so many times I memorised every word of that movie.

Many war movies since have been more visceral and 'realistic', but few pack the crushing power that FULL METAL JACKET still does.

Just wanted to pop in and let you know how much I enjoy reading your blog. I wanted to pass on the Sunshine Award to you, check it all out here, and congratulations!

A real life horror movie.This scarred me for life after watching it as a pre teen along with Alive where the soccer team crashes in the Andes.Way scarier than boogeymen and stuff like that.