Who Would Be Your Neighbor? 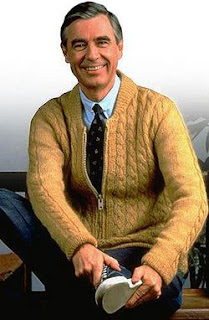 Today was the day that the big storm hit New England--and hit it it did. I was one of 4 lucky people in the city of Boston to actually have to go to work today. It was cruel and unusual, but it did give me the chance to do some serious reflecting. There's such an eerie quiet when you walk around during a snowstorm and thinking just happens to become clearer. As beautiful and peaceful as my walk to and from work may have been however, it was momentarily ruined every time someone got stuck in the snow, or a giant ice ball descended upon my head from the nearest tree.

One thing that a snowstorm like this does do however, is make me appreciate how people are so quick to help others in need. It's like we all develop this great sense of neighborly goodness. For example, my heart was so warmed when I saw a car stuck in the middle of a traffic light, and all the people in the other cars behind him helping to push and dig him out. It got me thinking of horror movies in the strangest way possible.

Annie Wilkes would have to be my top choice. 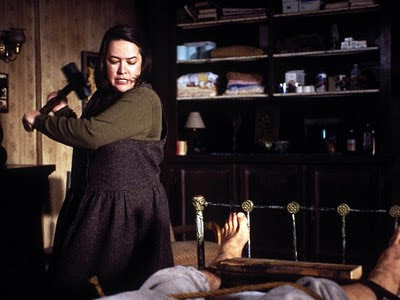 You can't deny that the woman is a serious beast, especially a serious beast in the snow. How can you go wrong with someone who has a track record of rescuing people crashed in the snow, throwing them on her back and trekking them back to her home? IN THE BLIZZARD? I have a hard enough time carrying a pizza box through the snow, let alone a James Caan.

Annie would surely be the beast whoops, (I mean BEST) person for the job, she's relentless, familiar with the elements and strong. I wouldn't be surprised if in the summer time, Annie is a part of the Strong Man competition, as I can definitely see her hauling a truck or two in the off season. I also wouldn't be surprised to know that Miss. Trunchbull was related to her. 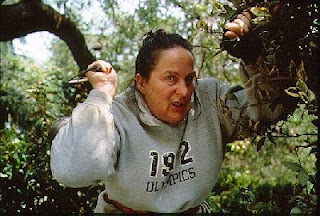 Of course one must be careful not to be too nice to Annie Wilkes. She might get overzealous and strap you to her bed and break your ankles.

Then again you can't deny the other powerhouse in the land of horror that is-- Jason Voorhees. 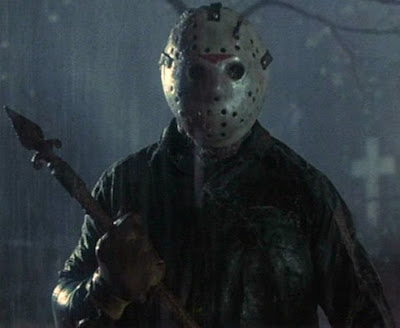 Here is a man whose stamina speaks for itself, a man who can work quietly and a man who has a decent amount of strength himself. I normally would question the problem of the small breathing holes in his hockey mask, or in more extreme cases, his burlap sack---but as we all know that has never stopped him before. Hooking him in is easy, just put on his dead mother's sweater.

You know who else wouldn't be such a bad neighbor? The Tall Man. 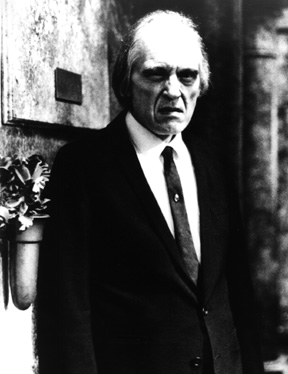 Apparently, it's "illegal" to drive around with a giant pile of snow on top of your car. Sorry people but I had no choice. How was I suppose to find a ladder and clean the top off of the giant blue van where I work? I thought so. The Tall Man however would be the perfect person to help me out--because he's tall! He can help me clean off the roof of the car and make sure I don't break any laws. As long as he leaves his scary metal Phantasm ball things at home, he would make an excellent snow shoveling neighbor.

Speaking of thinking outside of the box, how about using Candyman's assets to your advantage? 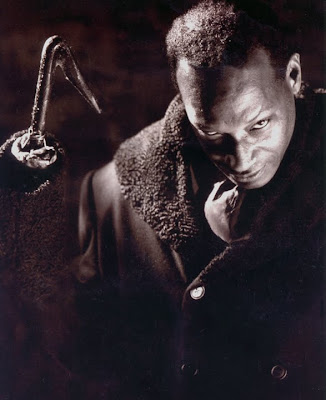 You know what one of the most irksome qualities of shoveling out your car is? Getting the ice off. Sure, a one handed man with a hook doesn't sound desirable in snow shoveling land, but his sharp and pointy hook would be excellent at scraping off that hard to break ice that glues itself so nicely to the windshield. His giant fur coat also ensures that he can work outside longer. All he needs is a delightful hat to match.

Or if submissive snow shoveler is your idea of a perfect snow helper, I would consider using Frankenstein's Monster, 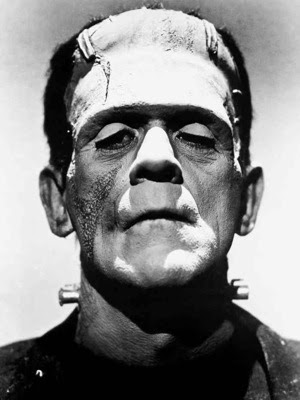 or even Bub the Zombie from Day of the Dead. 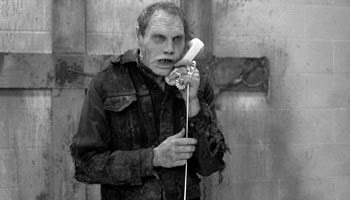 All strong men, who say little and will do just about anything you tell them to. Occasionally they may rebel, but when in doubt, chain them to a tree and all will be fine.

Who would be the worst neighbor to help in a snowstorm? Here are some possibilities.

Definitely do NOT knock on the door of The Blob's house. 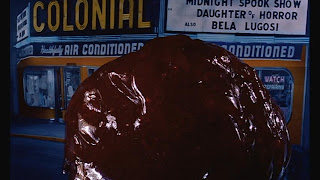 That thing hates the cold, and would shrivel up the moment it steps outside.

Although Freddy Krueger's charm is admirable, he would be a pretty bad worker. 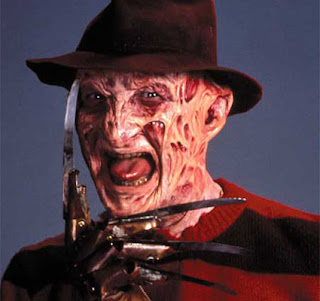 I imagine he would just stand there and say dirty things to you involving sexual innuendos having to do with the snow.

The same can go for Billy from Black Christmas. 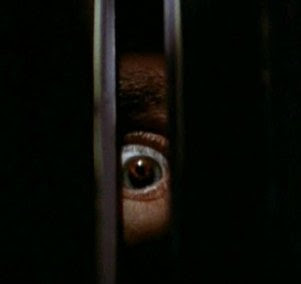 Every time you would turn around he'd be off hiding in some girl's closet and making prank phone calls.

And finally here are some choices from YOU. Answers from the Twitterverse and Facebook on who you would like as your snow shoveling neighbor.

Ste67 points out that the Humanoids From the Deep would be a huge help in the snow, thanks to their flippers hands being able to shovel away the snow effortlessly.

Hannah Neurotica agrees that Jason would be the best option, while Freddy would blab away and Michael would just kind of stand there. She also points out that Leatherface could probably hold his own as well although, we agreed--the snow might be a new experience for him and he could get nervous and frustrated....and we all know what happens next. 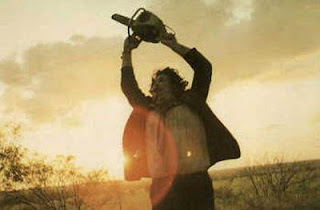 Both Angel Sierra and Nick Lazzaro shout out to the old man in Home Alone. 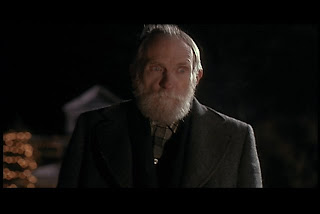 Not a horror movie sure, but who can deny that the man scared the crap out of you. Here is a guy so devoted to shoveling the snow that his hands are all bloody. He would shovel till the sun came up, that's for sure. He probably smells like a homeless guy though.

TVJunkieJason offers up Pumpkinhead as his neighbor of choice. He points out that his flappy, flailing arms would be great tools in shoving the snow away in volumes. Surely the demon would be helpful provided that you can keep him under your control and not Lance Henriksen's of course.

The Mike points out that Wilford Brimely a la The Thing would be an excellent choice judging by his speedy tunnel digging skills and random spaceship building skills. Plus, he does it all while battling the evil monster that is "Dia-beet-is". 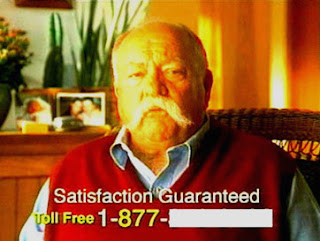 And BONUS he would bring Quaker Oats.

timtetreault also picks a science station employee--this time the great bearded masterpiece that is R.J. MacReady who is MacReady to kick some snow ass. Okay sorry, that was bad but I couldn't resist.

Jeff Konopka has the perfect solution: Get a truck from Maximum Overdrive and slap a snow plow on its front. Problem solved!

Dod March would use one of the Graboids from Tremors--just as long as he could get out of its way in time.

Bstank00 suggests Donnie and his flamethrower from Don't Go In the House, providing that he stays away from any gas tanks.

Zachary Kelley agrees with the selection of The Tall Man who can wield a good shovel, have his dwarf things help out and keep you on track by saying "Boooooyyy!" Which I think would be terrifying but maybe that's just me.

Aunt John justifies the choice of Kathy Bates' character in Misery pointing out that she can dig out a car AND perform corrective leg surgery, all in one day. What a woman.

MattOfAllMedia wants Cherry Darling from Planet Terror to be his snow shoveling partner...although he admits she would mostly just add some fun to....playing in the snow. 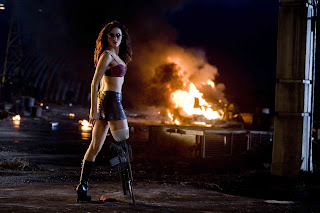 And finally, Tom Kingsmill would take the easy way out and annihilate the snow and the rest of humanity as well probably, with The Cloverfield Monster!

Seeing Jason in snow (which is what they are threatening in remake Part 2) would just be funny looking.

Personally, I'm thinking Patrick Bateman. Surely those abs have to be good for something...

Jason would flourish in the snow I think. He's been training for it enough I would think. He run in any kind of weather, I'm prettty sure.

Good one Chris, all we would have to worry about is his unusual temper. But luckily we just know that if he puts the plastic raincoat, poncho on and you hear Huey Lewis and the News--run away.

Sweet list! I could definitely have used some help when I was shoveling out yesterday- we got about 2 feet of snow!

Old Man Marley is clearly a good choice. I'd also want George Lutz of The Amityville Horror to help me out- if he can shovel as good as he can chop wood, he'd have cleared the snow in no time flat.... and maybe Francesco Dellamorte from Cemetery Man, as anyone who digs graves for a living has got to be good at snow shoveling too!

The old man from Home Alone was in Deranged, one of those "based on Ed Gein" films from the 1970s.