Hellraiser: So... What Was the Homeless Guy Eating Crickets in the Pet Shop All About Anyways? 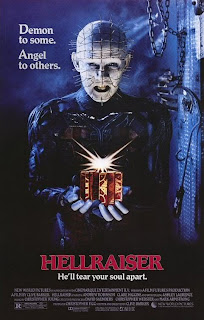 Another Clive Barker masterpiece. I have yet to read this book which is called The Hellbound Heart but I will report back as soon as I do. First, a disclaimer; Many people associate Hellraiser with the character "pinhead" who is the lead cenobite. While the film has largely to do with Hell and the cenobites, pinhead only appears a few times. He is quite an amazing character nonetheless and I appreciate him more and more everytime I watch this.

So we begin with Frank Cotton who likes to wear no shirt and put together strange puzzle boxes. What comes out of the box once completed are the cenobites. Pinhead, Butterball, Chatterer, and "female cenobite" yeah, real original name for the girl one I know.. These are demons from Hell who torture the unfortunate puzzle solvers. Frank goes to hell, and his brother and his 2nd wife Julia move in. Julia has had an affair with Frank in the past and often wanders the house investigating old pictures and reminicising of their violent sexual past.

I must be clear that the dividing line between sexual pleasure and physical pain is extremely thin in this film for a reason. Pain is used as a source of pleasure so therefore Julia's relationship with Frank only mirrors this fact. Anyways, Franks bro is moving a matress and cuts his hand on a nail causing blood to spill on the floor where Frank died. The blood vanishes and Frank is reborn! But he is less than human, and only a disgusting blob of gross fleshy puss vomit boogers. Who should happen upon that site but Julia! Imagine seeing your former lover transformed into a pulsating booger. Unfortunate really.

Frank coerces Julia into finding him victims so that he can regenerate himself, and then they can escape the cenobites and be together forever. But honestly you think you can outrun a demon from hell? Think again Frankie. Julia agrees because she is a huge biotch and together they kill numerous men.

Our heroine before i forget is Kirsty Cotton who stumbles upon her muscly uncle and flips a shit. Who wouldn't? She finds the puzzle box and escapes with it only to later open it herself. The cenobites appear and stuff their fingers into her throat before she screams that she will lead them to Frank. This works but we soon learn Frank has killed his brother, (Kirstys father) and taken his skin. In his anger for being thrown to the Cenobites, he tries to stab Kirsty but stabs Julia instead. But why leave a meal uneaten? And so he takes Julia before being chained and ripped apart by the cenobites for good.

This movie is violent and at times nausea inducing but I still enjoy it immensely. Something about pulsating muscle ligaments really makes me want to barf, but at the same time stare with open eyes. The film really plays with the S&M thing and that makes it extremely powerful. I can't all put together in my head but I think it's pretty remarkable. It's a fantastic movie with a plot like you've never seen before. Pinhead is probably my favorite villain and if you don't do well with gore I wouldn't try this one out. However, it is a classic and if you haven't seen it you should be ashamed.

BUY Hellraiser on BluRay at HorrorMovieEmpire.com!
Posted by Andre Dumas at 6:38 PM

I saw this on the big screen in 1988 and was terrified! Pinhead is certainly an original horror character.
I watched it again last week. It is the only the second time I've seen it!
Well it isn't so scary anymore! I couldn't believe how it had dated. As far as 80's horrors go this was one of the scariest of the era, but todays viewers would probably find it lame.

Not only is Pinhead my favourite villain,.but I also find him quite attractive. When I was younger, I sometimes even dreamed I was his girlfriend. (Which may sound better than it is, what with all the chains and hooks.)

I love Julia's misplaced sense of loyalty, but loyalty nonetheless; I love cold, bitchy, women (but that's for my head-shrink.) It's kinds of a twisted love story. Guys, how many of our ex-girlfriends can we look back on and say they would commit mass-murder to bring us back from the dead and put flesh on our bones just so we can hold them and make love to them once more before we try to outrun and outsmart demons? (I can only think of one from my past, but she takes medication to control that now, lol.) "Come here, I wanna touch you, damn you!" That's fucking hott!