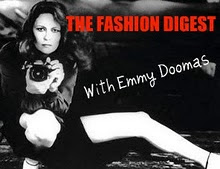 Well friends, this is sadly the end of Poltergeist month. Hopefully you've enjoyed my craziness, my creativity (?) and my dedication to one of my very favorite films. If you missed any posts here is a comprehensive list of all the joy.

Poltergeist Scandals: What the TV People Were Really After.

How to Use Eccentric Poltergeist Quotes in Everyday Life
A Funny Thing Happened on the Way to Work: a Letter to the Community from Mr. Jenkins.
Poltergeist Plot Holes.
My Greatest Wish

Bonus post! What I Learned From Craig T Nelson

and now......
Rejoice because Emmy Doomas is back for another edition of the Fashion Digest! This time we take a good look at the often atrocious styles and fashions of the Freeling family and try to update their looks to a more modern alternative. Read on to find out who wears short shorts, and whose look is surprisingly making a big comeback today---despite its ugliness.

First, a few words from Emmy:

Poltergeist always fascinated me as a child. It was probably the scariest movie I would let myself watch until I got into this weird Exorcist phase. For some reason I enjoyed watching Regan spit up pea soup every year for my birthday, but that’s neither here or there. I always loved showing my wussy friends the part in Poltergeists where the guy rips his face off in bloody chunks in the bathroom. Maggots….a great way to win friends since 1983! But in all seriousness, Poltergeist now exists for me as a depository for really horrible 80s fashion, which as I am Emmy Doomas of Fashion Digest extraordinaire, need to fix! So here we go! 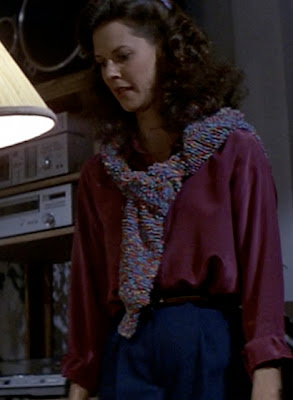 Oh Diane, Diane. Despite how much I love this scene and how it typically brings me to tears--I can never get past the notion that Diane's sweater looks like chewed up bubblegum or perhaps a terribly crocheted sweater that Carol Anne may have done in Nursery school. That isn't to say I don't also love her ridiculously high pants and beautiful maroon button up but hey it was the 80s. At least she makes up for it by being hot?

Ohh Diane. I think the last time I watched this movie with Andre I said, “I hope I’m a hot mom like Diane after I push out three kids”. She’s a pretty hot ticket, with a pretty hot wardrobe! I love how they live in California where one minute she’s in short shorts and the next in a long sleeve with a sweater tied around her neck. Must be all those ghosts in the house or something that causes the temp to plummet to sweater weather. Is it just me or does that sweater remind you of those make your own pot holder sets your grandma would always give you for Xmas?? Terrifying! 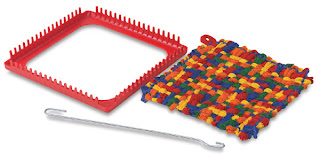 If Diane’s neck is so cold, I would suggest a fun high neck sweater, like this bad boy from Gap. Appropriately named a funnel cardigan, this will keep you super toasty, and eliminates any need for a scarf or ugly potholder thingy around your neck. I’m not even going to go into those high waist pants! Bad Diane, bad! 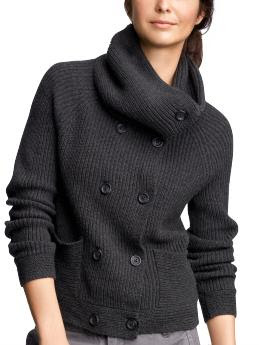 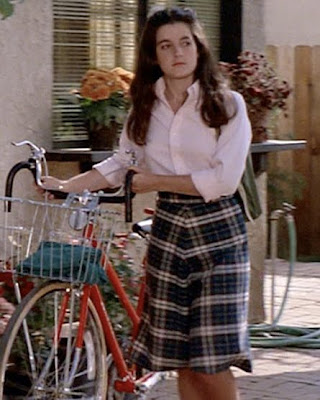 Dana is a strange kind of character. She is rarely seen without shoving food in her mouth, yet she comes back from dates littered with hickies AND she talks on the phone all night. She's also mean to her brother and does her homework at the breakfast table. How she concentrates on math homework while shoving down 5 waffles is beyond me. Oh and I almost forgot, she has a wide knowledge of offensive hand gestures.

If Diane symbolizes the hot mom to me, then Dana symbolizes the most awkward phased teenager of all time! She’s probably the most annoying older sister I’ve ever encountered, and has probably some of the weirdest outfits I’ve ever seen on someone who’s supposed to be in high school. In this case, I hope this is truly her private school uniform, or else she’s shopping out of grandma’s closet from the looks of this pink button down and ankle length plaid skirt! I know riding a bike in a mini would be pretty grotesque, but how about a skort or something? Anyways, going along the lines of long plaid skirts, the kids at Ralph Lauren always do plaid right. If you want to go long; go pencil skirt. It should be tailored and fitted, and worn with fun high boots. Ditch the button down and go for either a contrasting turtleneck, as seen here, or perhaps a scoop neck T. 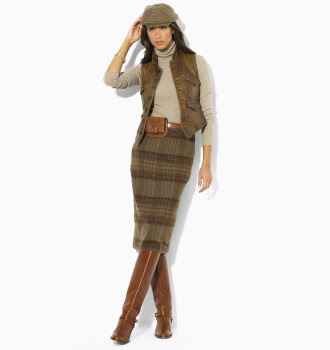 While were on the subject of Dana, her hair at the conclusion of the film always bothered me. She goes to spend the night at Lisa’s, and comes back with hickies and probably the most ridiculous aerobics high pony tail braid concoction I have ever seen. I mean I know her house was imploding, but seriously her hair style was much more terrifying. 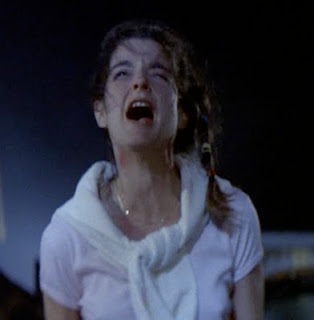 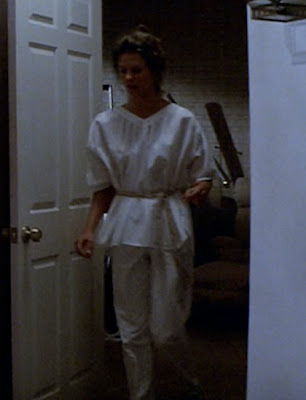 Hah. I love this look. It's clearly the obvious choice for the big crossover to the other side. I'm not sure why they chose this outfit at all actually. Diane clearly wore it to impress Tangina, perhaps not knowing that she would also be journeying to the other side of the closet. Maybe she would have chosen something less billowy, if she had known that those closets can get very windy. In other news I think I saw Kourtney Kardashian wearing this same outfit the other day. 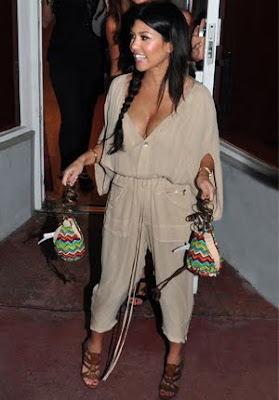 Here’s hoping they put Diane in this outfit just because it was easiest to tie a rope around her waist (so she could go to the other side) if she already had one to begin with! The 80s were notorious for the jumpsuit; the adult version of the one-sie! While I would like to say I have a better update to this look, the terrifying thing is that jumpsuits are back! Look at these updated looks from the runways. 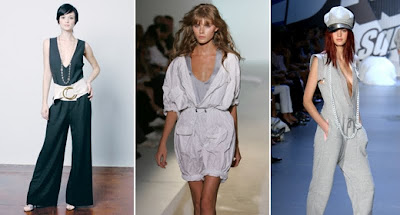 Well certainly not as billowy or nautical as Diane’s look, these still seem a little silly to me. How does one pee in this? You basically have to strip down almost completely to take a tinkle? So wrong. I do like the plunging necklines, and sleeveless aspect to them, though the middle one looks like a full body windbreaker to me! 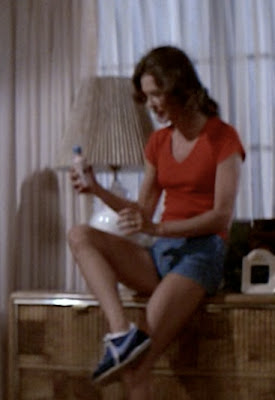 This is Diane's cleaning up the house look and I must say it is.....AWESOME. I don't really have much to say except that shorts and I don't get along and I really wish we could change that but somethings just aren't meant to be. Love the sneaks though.

Oooo athletic Diane! I wonder how old Diane is supposed to be in this movie? I would think anyone over 35 would not wear short shorts anymore, but hey this was the 80s, where even my Dad was sporting thigh highs without qualms. I love her Nikes too, vintage to me 20+ years later, but I get so nostalgic for the original Nike swoop before that whole Air Jordan crapola. But if we’re talking about updating old looks, I would say all signs point to a romper! While yes, a romper is a jumpsuit, just with shorts instead of pants, for some reason I love them. I think this is the only acceptable reason to have a tight top and short shorts—if it’s all one piece! This one from Forever 21 looks mighty cozy. 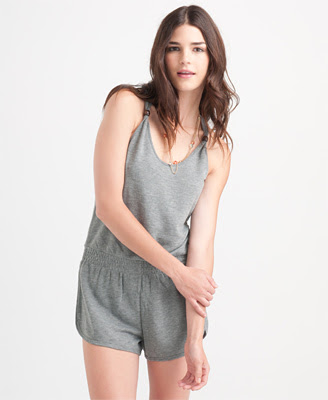 It’s terrycloth and I really don’t think there could be anything better than an outfit made out of your favorite towel! I wish this was a print though, as I’m getting a little AC Slater Captain of Bayside Wrestling vibe, but beggars can’t be choosers right?

Jo Beth is truly the hotness. Also, I made a pair of pants for my cat out of a Shamwow, and that's sorta like the terrycloth thing. That is all.

What's going on in that shorts picture?! Just me??

Love the post. Must not read your blog at work if I don't want to be stared at because of the laughing LOL


Sarah - maybe I should have put a NSFW tag on it, except instead of boobies this blog causes laughing...how do we adjust that definition I wonder.

Oh and also, Diane is putting calamine lotion on all her bug bites. It was hard to get a good shot of her shorts, she's always running and jumping around..