Dogtooth: What a Feeling 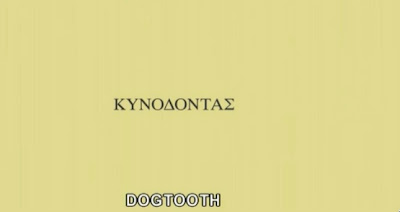 I can't believe I forgot to watch Dogtooth after putting it on my "See this now" list. Nine months later after giving birth to my food baby and watching movies where CGI bees come out of Bradley Cooper's ear, I finally remembered to watch Dogtooth. What was I doing all that time? Oh right, being lazy and wearing no pants. Also maybe eating pizza, but who can say for sure?
Dogtooth is not a horror movie, but it does live in that little area of land known as Disturbia. Disturbing because of the subject matter and the weight of the situation, plus also there is cat trauma and tooth trauma! Double sad face.
You may remember that Dogtooth was nominated for an Oscar for best foreign language film. This means that I am almost certain that this is a great film and that there is a lot of nudity. It's better if you do not ask me how I come to certain conclusions in life. Trust me.
Dogtooth centers around a mother and father who have cut off their children from society. Their 3 "teenage" children live in an isolated house with tall fences and have been raised to learn the complete opposite of everything that is fantastic. For instant, a telephone is a salt shaker. A pussy is a bright light. And zombies are little yellow flowers. It is in fact, a very grim and disheartening commentary on censorship. By the way, I'll keep referring to the kids as "kids" because I'm pretty sure they are all about 30 years old.

As you may have guessed, even if all the (what are perceived as) negative aspects of life are blocked out---the violence, the hatefulness and the fun still find a way to worm their way in. Because if The Village taught us anything, it's that you can always send the blind girl over the wall if you don't want the surprise ruined and also---don't try to protect people from the real world. It's not okay.

I really enjoyed Dogtooth for the sheer amount of blatant craziness that it was exuding. It's the kind of movie that continues to keep you baffled well up until the end of its running time. You would think that after seeing the kinds of weird shenanigans these "kids" get up to, you would not be surprised when they then start doing a weird dance during their parent's anniversary dinner. But you would be wrong. You would also be wrong in saying that the eldest daughter doing her own rendition of the Flashdance dance was not the greatest thing on the planet. It is the greatest thing on the planet and you better believe it. 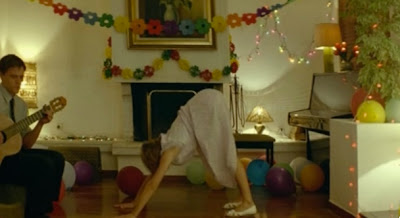 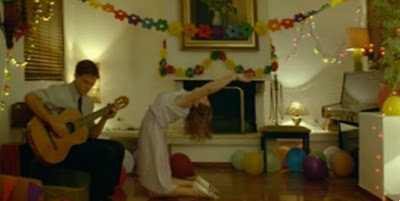 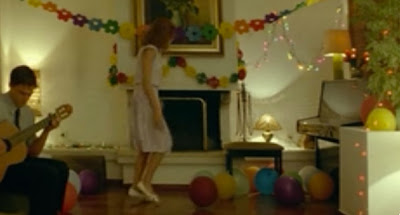 It's just that the levels of insanity seem to grow and grow as the movie progresses. But not in this extremely ridiculous way. More in a steady incline kind of way. The most painstaking part of it all though, is how we never get a clear cut explanation for why the parents are doing this. And I totally love that. Again, who needs explanation? The thing about censorship and those loonies that try to keep their kids away from TV is that no one ever really has a great reason. They mostly just want to protect their kids, or shield them from something they perceive to be evil or harmful to their development. What those parents don't know however, is that TV is very good for development. Where would I be in life for instance without the vast knowledge that giant pieces of meat and diapers are the most expensive items at the grocery store? 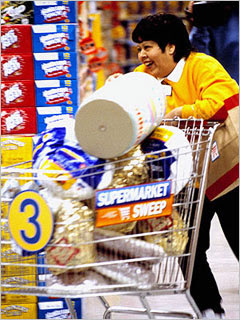 Without TV, how would I possibly know the correct way to hit a target while effortlessly dodging tennis balls being shot at me by a really scary, yet oddly attractive body builder? 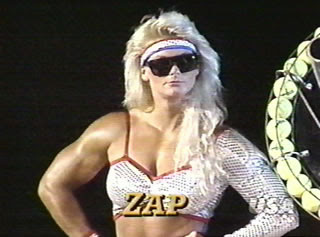 Kids need these things in life. They need experiences and they need to make mistakes. Without them, the "bad' finds a way to get inside anyways. And plus, any parents that condone the slaying of a cat with garden shears should probably be killed. Just sayin'.
Dogtooth is a truly remarkable film. Despite it not being in the club of horror, it is insanely creepy and unnerving. It's almost like you feel that someone is playing a really clever and intricate joke on you. Like the actors will stop in the middle of their creepy, psuedo psychotic games and be like HAHA Andre we were just joking. But they're not you guys.

They're not.
Moral of the story is: don't try to protect your children, because in the end, you'll only harm them and cause them to bash their teeth in with a dumbbell. 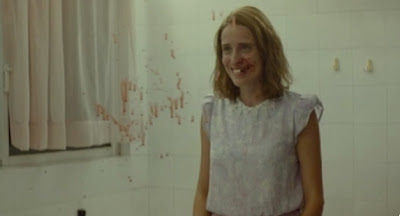 Oooh also AWESOME ENDING huh? It's probably one of the most simple things you could think of, but it's so damn meaningful isn't it? People that have seen it--you know what I mean. Or do you? Tell me this, what is implied by that very last shot? SPOILER: is it that once freedom is achieved, it's too late? It's too scary to leave the confines of the trunk? Or maybe she's dead? SO MANY THINGS HAPPENING INSIDE MY HEAD RIGHT NOW.

Anyways, watch Dogtooth. You'll be uncomfortable for about 90% of the film and during the other 10% you'll be laughing at the Flashdance re-creation and the Jaws and Rocky quoting.
Posted by Andre Dumas at 9:10 PM

If being lazy, eating pizza, and not wearing pants is a crime...then I'm going away for life.

Need to see this one right away, it sounds like like a Harmony Korine film...makes you feel uncomfortable, but you cant stop watching!

I, too, was blown away by this movie, and went back and forth on writing it up since it wasn't straight horror. Looks like I need a "disturbia" tag as well ;)

Honestly, the part that freaked me out the most was when the dad made him pick between the sisters. VOM.