Return of the Living Dead: Finally Talking About It! 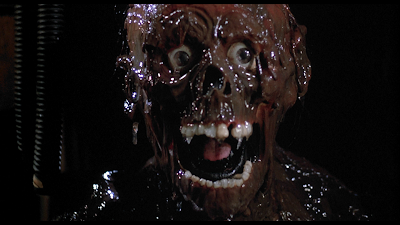 I've been asked several times by readers and Twitter followers and homeless bums on the streets, why I haven't reviewed Return of the Living Dead yet. The truth is, I've written about it a few times just not on this here blog. But because I'm feeling especially saucy today and because I realize people just don't click on links because I tell them to--I will be reposting one of my favorite articles that I wrote way back in August of 2010, on the subject right here and right now. That way we can all hold hands and sing and be happy about stuff. AND maybe also eat sandwiches. Because really, what's a Monday without delicious sandwiches?

If there is one thing I’ve grown tired of lately, it’s the fan base of everyone’s favorite horror icon, the zombie. Since my horror craze started a bit later in my life, I was late at grasping the concept that at some point in time zombies were not annoying– they were terrifying. How was I suppose to know that before zombies became memorabilia for teenage horror fans, they were vehicles of social commentary? Who would have told me that once, long ago, zombies were not punch lines but actual walking corpses that managed to chill the blood of anyone watching? Luckily it doesn’t take a whole lot to learn these startling facts. A copy of Romero’s NIGHT OF THE LIVING DEAD, or even Fulci’s ZOMBI 2 is enough to help you understand that zombies had a history and a life before they were downgraded to a joke. 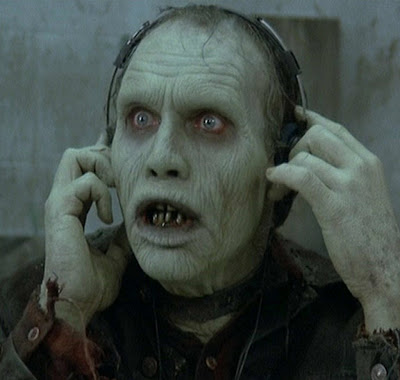 If we think back on where zombies went wrong, I think a fair assumption to make is that the addition of zombie comedies played a major role. You could also say however that the DAY OF THE DEAD zombies who clearly represented the free thinking zombie and Bub the comedic relief zombie, also had a big hand in the eventual demise of the zombie. More so however, I think I would blame the masses– 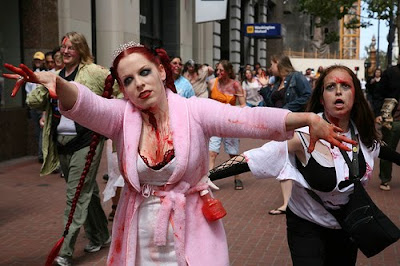 well, the zombies I guess, for eating up every single piece of zombie hysteria that was thrown at them.

One would think that being a modern day zombie hater, would mean that by default, I would hate the grandaddy of all zombie comedies–RETURN OF THE LIVING DEAD. Don’t worry, I thought it too. I expected to roll my eyes at the joking and glorifying of the zombie race but instead, I grew interested. In the short time span that I’ve held RETURN OF THE LIVING DEAD in my hands I have watched it about 3 times. Not because I was instantly taken with it, but because I respected it and wanted to understand why it didn’t fall victim to my automatic hate of zombies. 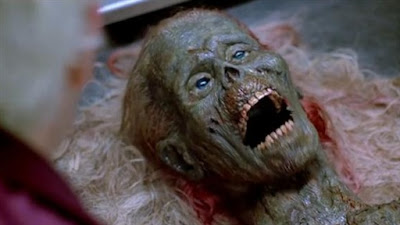 As far as I can tell, the main reason that RETURN OF THE LIVING DEAD does not fall prey to its expected outcome is for the same reason I came to like it—it has respect. It’s quite easy to determine that the makers of the film have an appreciation and a respect for zombies that seems missed by most modern filmmakers today. Perhaps the most obvious way it does this is by keeping the zombies scary. There are moments in RETURN OF THE LIVING DEAD that have me wincing with semi-embarrassed fear. My favorite being when the paramedics turn on the headlights to find an eerily motionless horde of zombies starring back at them. 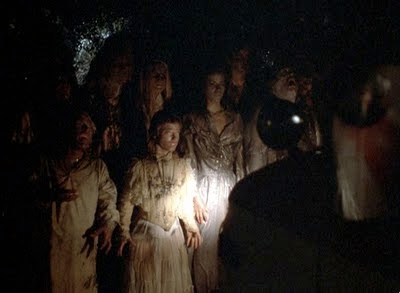 It was like a swift punch to my gut which then caused me to glance around and wonder if people were taking note of my inherent loser gene by being scared of a zombie comedy. But that’s the beauty of it. RETURN OF THE LIVING DEAD while at times hysterically funny, never forgets that it is still a horror movie, and that’s what I love about it. Images of creepy midget zombies, half torso skeleton zombies, cadavers hanging by huge hooks put through their ears—it’s all scary and effective and more importantly, laughing is far from my mind.

On the flip side of the respect argument, the film also does something that is extremely hard to come by today. The joke and comedic aspect never has to do with the suggested ridiculousness of zombies. Rather, the comedy comes through the character’s reactions to the terror that the zombies are creating. Do you see? The respect is more present than ever by the very idea that the zombies are not the joke–we are. 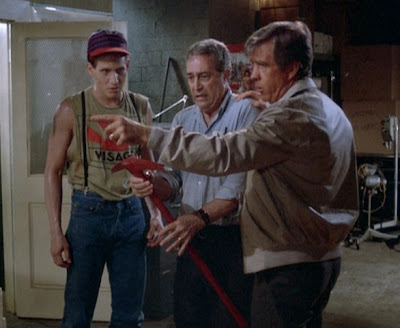 Today it is common for the opposite to happen, as people start insinuating that zombies are just slow dead people and their only threat is their large number. Yes it’s very funny when a stumbling zombie ambles through the doorway and Mr. Tough Guy shoots him in the head as a mere afterthought. RETURN OF THE LIVING DEAD however gives us grown men screaming their heads off and falling apart at the very idea of sawing off a dead guy’s head. Additionally, it barely has one instance where the living people are shown overcoming the dead. It’s always the dead in complete and mass control of their surroundings. 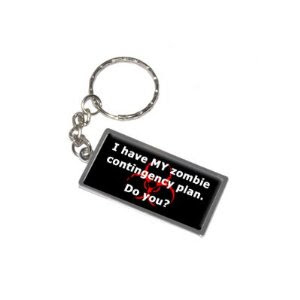 I’m sick of these zombie contingency plans and people asking me my survival techniques when the zombie invasion happens. My plan? Sit in a corner and cry—which is what everyone else will be doing. I’m sorry, but half of you people have never picked up a gun in your entire life and a much smaller number of you have ever killed someone OR more importantly, anything. I have a hard enough time putting a lobster into boiling water without feeling guilty, so I’m pretty sure that if I had to shoot any of my family members, or even my neighbor for that matter, I would rather shoot myself.

It’s harsh man, but in my opinion–the truth. RETURN OF THE LIVING DEAD exemplifies this principle perfectly. There’s no burly hero, or even a shot of someone getting the better of the zombie. There is hopelessness and of course eventual resignation which solidifies the great amount of respect that the film has for zombies. Zombies aren’t the joke at all–our false sense of strength and intellectual capabilities are.

While I may have been dubious of RETURN OF THE LIVING DEAD’S appeal at first, I have eventually come to realize its greatness. Yes, Trash may dance naked in a graveyard, 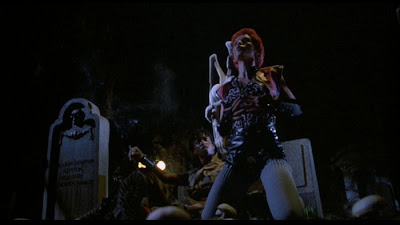 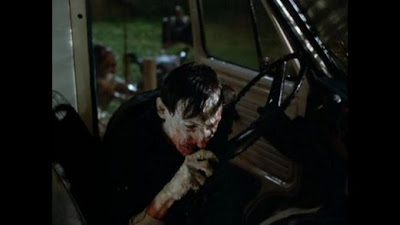 but through all of this, the film never looses sight of its initial inspiration-the zombie genre. Its respect is evident in more ways than one and it has me fully prepared to admit that the more realistic account of the zombie apocalypse is not NIGHT OF THE LIVING DEAD at all—it’s THE RETURN OF THE LIVING DEAD, as much as our inner hero doesn’t want to admit. 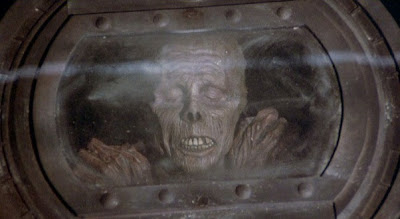 I can't think of his name, but the manager of the medical supply company is probably one of my most favorite characters of all time. I love that sniveling, screaming man!

This is the best post about the state of the zombie that I have read in a very long time.

There are still filmmakers out there that get this... but sadly, SO MANY that do not.

Great assessment of a fine cult film that was part of my formative years. It even has Clu Gulager, fercryinoutloud! The movie still holds a place in my heart.

As a zombie movie fan since who knows when, your thoughts about the decline in the living dead in film being taken less seriously are dead-on...see what I did there? Seriously, I hardly want to watch about two-thirds of the zombie movies being made because they're parodies of parodies. What happened to the good old-fashioned shambling force of nature that has no humor, no intelligence, just hunger? Bring that horrifying, bleak vision back.

Oh, yeah, and you nailed the "faux-tough-person" thing. People talk tough but come on, like you said, we'd all be in a fetal position if that should occur.

Yeah carol clu gulager as"burt" is the coolest chatacter in the film. I thought it was weird that the 2 guys who work in the medical supply warehouse that turn into zombies are the same 2 guys in the sequel who are graverobbers who then turn into zombies.

Do you want to party?
It's party time!
My disrespect for many zombie films, revolves around the hypocrisy.
Often, it seems, the gorier the zombie flick the better, right?
It's completely socially acceptable to cheer the slaughter and evisceration of the dead by popular culture, but if you applaud the same for equally fictional living characters, you are somehow seen as a deranged human being.
But, aren't most of these zombie flicks just thinly veiled excuses to watch animated things get torn to ribbons?
I like some zombie films, but prefer when it's a mass psychosis, or disease spread, as opposed to the reanimation of the dead.
Serpent and the Rainbow was bad ass, and I liked seeing where zombies came from historically.
ROTLD was fun, as was Cemetery Man. Rupert Everett is the bee's knees in CM.

I love this movie. While it is most definitely a divergence from the classic zombies, it did add a lot to the culture of zombies. Where would we be without "braaaaains." But I think this movie holds up as a great farce of the horror genre at large.
I actually reviewed this movie too on my new blog. I would love to hear from another critic. Too see if my review holds up.

Thank you for saying out loud on the Internet what I've been feeling, thinking, and saying amongst family and friends: Zombie movies today are crap! The last good zombie movies(and horror movies in general) were in the 90s. Once the 2000's came all went to crap! Major crap! I don't like any of them! And everyone getting all into zombies like a cool fad is so annoying and they have helped add to the downfall of zombies! I HATE the walking dead! Crappy show that just adds to the downfall of zombies! And you are so right that everyone thinks they are all badass and will be able to whoop zombie butt, in truth most will be hiding and crying like a baby! Or running away screaming and freaking out! Bravo to you for pointing all this out! And I LOVE ROTLD! Great perspective on it. :) Makes me look at it in a whole new way I never thought to.