Digest Quickies: You Should Have Been Wearing Your Seat Belts! Devastating Car Crashes. 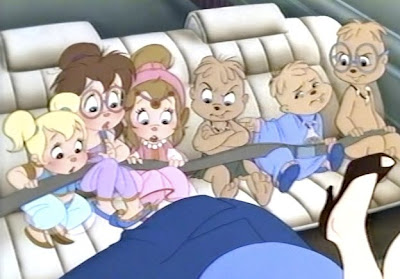 Yes the above picture is from The Chipmunk Adventure and yes I promptly watched the entire movie after capturing that screen shot. Ahem. Anyways I am about to go over some seriously EPIC car crashes in horror history- in most cases a seat belt would not have helped and in some cases seat belts may have been worn but nothing would have prevented me from talking about the Chipmunks so there you have it. Shall we get started?
The Descent
Talk about way to go moments. Was the Dad even trying to pay attention while driving or was he just a little too focused on his affair on the side? The sad thing about this car crash is that you don't see it coming- and you do not see the death of the little girl coming and it kind of makes you cry. Also maybe worse is when the crash happens in flashback form- still surprising and jump worthy. There is also a lovely shot of a pole growing straight through that douche bag's head! Huzzah.
The Changeling
The only thing worse than being in a tragic accident is watching a tragic accident that claims the lives of your wife and daughter. What makes this even harder to swallow is the fact that his wife and child weren't even in the car when the accident happened! So seat belts are irrelevant! But also...they totally would have had time to run away. Just sayin'.
The Dead Zone
If I had a nickle for every time a tractor trailer rolled over, and it was so rainy that I couldn't see out my windshield and crashed head on into it! Actually if it wasn't for this tragic accident which landed Christopher Walken in a coma, he would never have been able to save the world from the dastardly future deeds of Senator Stillson's. Good work tractor trailer!
Signs
Yeah so we don't actually get to see this happen, but the after math of the accident is enough to realize that this was some pretty serious stuff. Stinks on all accounts!
Final Destination 2
I once saw this whole scene on TV and was so flabbergasted as to what it could possibly be that I couldn't help but keep watching. I eventually figured it out, but it still survives in my head as one of the most ridiculous and craziest things I've ever seen.
Death Proof
Obviously the most epic of all car crashes- this scene is the end of all discussion on what is the best car crash in cinematic history. Never have I ever been so terrified of an impending crash and never have I desired more to yell at someone to put their leg back inside the car!
Other notable crashes:
Carnival of Souls
Wrong Turn
Inside
Jeepers Creepers
Scream 2
Scanners
Posted by Andre Dumas at 10:23 PM

I love movie car chases and car crashes. Great post! I might add the intentional bus crash in Trick r Treat. Sure you don't actually see the carnage, but that doesn't change the fact that it's absolutely horrible.

Good one! I went over my entire list of reviews to make sure I didn't leave any good ones out like that- but it completely slipped my mind!

The Descent and Death Proof are the best, even if I didn't like Death Proof...that car crash is great. Cool list!

I maintain that this entire list was created just so you could comment on The Chipmunks. Still a great read though.

Haha well you're wrong wrong I say! I wrote the post and then when trying to find a good title- that very line from The Chipmunk Adventure popped into my head and tada!

Great idea for a post. That one in The Descent is my favorite. Totally comes out of nowhere.

Hideaway - an otherwise shoddy film from 1995 with a lot of decent actors slumming it - has a fantastic crash at the start, one which definitely warrants a mention.

I've never seen that one Nowtas, thanks for the heads up!