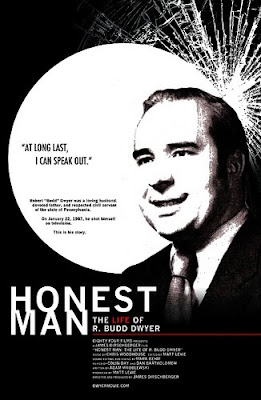 If there's one thing I despise, it's politics. Call me naive, stupid or single minded but politics and I just do not get along. It's not my fault I have a selective narcolepsy button that turns on anytime somebody talks about politics. It's also not my fault that I have no idea what any of those "big" words mean...or is it? Yes well, I suppose that is my fault for not paying better attention but I've got bigger things on my mind like....sandwiches.
Anyways- when I was approached with this screener of Honest Man: The Life of R. Budd Dwyer, I was very worried that my narcolepsy button would kick on almost instantly. Budd Dwyer is better known to almost everyone as that guy that shot himself in the head during a live press conference. The footage is horrific and unsettling, and the idea that that is REAL really distresses me till no end. There's something about real on camera violence that is so much more terrifying than what can be produced with film. Put any horror fan in the midst of a real crime scene and I'm sure they will be puking in the bushes in no time.
It was this fact more than anything that drove me to the documentary. What were the repercussions after Dwyer's suicide? And what was he truly aiming to accomplish by killing himself in front of cameras? And how did it backfire? However, the documentary, directed by James Dirschberger actually focuses more on Dwyer's conviction and the real man that Dwyer was, which in hindsight is perhaps just what many people need to see. It's sad of course that Budd Dwyer has now just come to stand for "that guy that shot himself on TV". Few people probably even know why he did what he did or what his role actually was--I know I didn't. 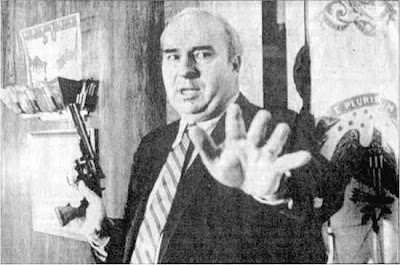 The documentary begins with Budd in his early political career. It highlights his honesty, his good character and the joy that his family gave him. Soon it leads us up to the controversy which to me and my no nonsense political mind perceived as a brick wall. Perhaps I am not really the target audience for a documentary based largely around a man of politics but damn it--was I confused. There's all this talk about bribes, and taxes and stuff I have no clue about. I wouldn't say the material wasn't handled properly, I just think that it's kind of an unavoidable bit of the "plot" that cannot be ignored. I still don't really understand what happened, and I'd be lying if I didn't say that I was bored. But there you have it.

The rest of the documentary however is quite interesting although it's very one sided in my mind. One would think that every single person in Pennsylvania loved Budd Dwyer but as we all know in politics this is never the case. This may be my one real problem with the film is that there doesn't seem to be another side. Sure if all you interview are those close to Budd and his family--you're going to get all positive feedback. You're going to get a lot of people who maintain Budd's innocence but what about the other side?

The main thing that is missed in this is a clear sense of Dirschberger's own voice. The documentary really is all just interviews. There isn't much of anything else establishing the bigger picture here. Not to say that documentaries aren't usually a bunch of interviews, but here there's nothing in between the interviews. The scenes only change from person to person in their interview chairs. There is one brief moment during an interview with Budd's daughter where you hear an agreement from Dirschberger and it's almost startling. It's like for a moment there we forget that someone is really there, behind a camera. We forget that this is a documentary and not just a collection of interviews made up of people from Budd Dwyer life.

For me, the high points come when the the aftermath is discussed. Those interviewed make comments on how unfortunate it is that while Budd's bigger agenda was getting people to realize that the judicial system is out of whack if this can happen--but it never came to that. Instead people just focused on the horrific nature of the suicide. People became oddly infatuated with finding the footage online and reliving a real life horror. The reporters in the room were bad mouthed for caring more about a good shot than they cared about Budd's life. 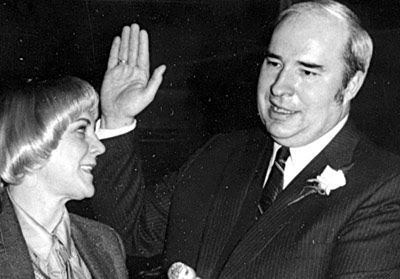 The only problem with this portion of the film is that it is much too short. To me it felt like this was the most interesting part of the documentary and yet it is restricted to the last 15 minutes or so of the film. Additionally there is no real commentary about the aftermath of the events save for a compilation of what all those interviewed have said. I just wish there was more of a glue holding everything together. Interviews are great but what is everybody really saying? What can we draw from everyones opinion? And what is missing?

Overall, I greatly value what Dirschberger has done here. The documentary sheds light on a man few know much about. Yes, it's a lot of political talk but the film achieves one of the most important aspects of a documentary--it makes you think. It causes us to think about Budd and what was really happening. Is it all true, was he honest and is that why he maintained his innocence? I can believe it I suppose, but still, there's that question of the very public suicide looming in my head. Would an honest, kind, family man really do that to his friends and family? So many questions--and yet so few of them get answered.

It is incredibly touching and eye opening to see interviews with Budd's family, and hearing their thoughts that had run through their minds the morning of the shooting. These points were heartbreakingly sad and I couldn't help but wonder how awful that would be. I value the intimacy that Dirschberger approached this with but I still am finding that I'm stuck on a bit of a speed bump when looking at the overall picture. I'm grappling with the idea that this feels much less like a documentary and much more like a "Behind the Music" sort of special.

I will recommend it however for anyone who finds that they want to know more about the life of Buddy Dwyer. And you should I might add--because he was pretty fascinating. And he deserves to be seen as a political figure and not that guy that shot himself. If you're looking to get down and dirty with the shooting, and its aftermath however this may not be the right film for you to see.

Honest Man: The Life of R. Budd Dwyer will be screening in Budd's hometown of Meadville PA on January 22nd (the 24th anniversary of Budd's death) at the Vukovich Center for Communication Arts at Allegheny College. Additional screenings around Pennsylvania and the US are planned and will be announced in mid January.

If you cannot make it to a screening, the film is available for purchase at DwyerMovie.com

I remember seeing the video way back in 2000 on one of those first video sites that specialized in the "too extreme for TV" stuff. I had never seen anything remotely so gruesome as that on a screen, and along with coworkers showing me a beheading via a sword on the same website, I was nauseous for the entire day.

I don't think I could bear to get to know the guy. Would only rekindle that nauseousness for the guy's tragic end.

I grew up (and still live, in fact) in the Philadelphia suburbs, so as you can imagine, this was big, BIG news around here when it happened. I, too, have a hard time watching the video, but would be very interested to check this documentary out, if for no other reason than to hear the interviews with his family.

If you want to watch a really unsettling movie about suicide, watch The Bridge. It's about jumpers off the Golden Gate Bridge. It's good, but it raises more questions than it answers. It does show some of the suicides.

Does this documentary show the actual suicide?

It does d, although you can easily find it on Youtube. Very disturbing stuff. That doc sounds extremely horrible...I don't know if I have the heart but I am curious to see how it's done.

I've seen the Dwyer suicide online, just curious if the documentary went there, which IMO it would have to.

I think The Bridge would fit in with your quest to see the most disturbing movies out there (I was on that quest at one time). What's interesting is that it doesn't really contain any violence at all, but is so disturbing due to the subject matter. Of course it is a documentary and not a horror movie, but it is a lot scarier in some ways than most horror movies.

Well I certainly am open to including non horror movies. A lot of them aren't really horror that I have so far. I'll have to look into this, thanks!