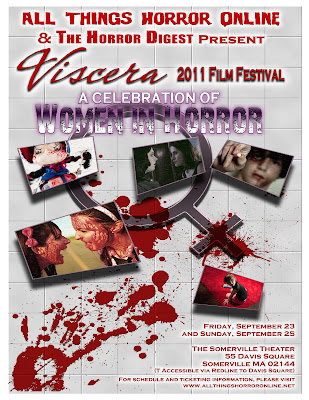 It's no secret that Boston doesn't have the most public horror following out there. Horror events seem few and far between and when they do happen they're often masked in Independent Film Fests or Sci-Fi events. However, thanks to my buddies Chris and Mike of All Things Horror, this has been steadily changing. Every 1st Wednesday of month Chris and Mike showcase independent horror films at the Somerville Theater. It's an amazing opportunity to see some films made by people who truly love horror.
Going to these screenings has always been something I look forward which is why I am so tremendously excited to tell you about what's happening this weekend....This weekend All Things Horror and The Horror Digest proudly bring the Viscera Film Festival to Boston. 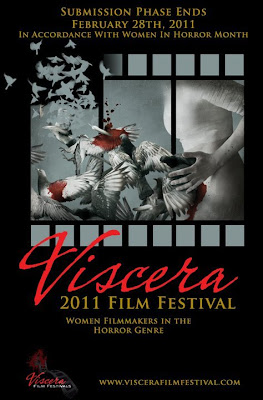 The Viscera Film Festival was started by Shannon Lark and Heidi Honeycutt and is dedicated to expanding opportunities for female filmmakers and educating the public on the changing roles for women in the film industry. Viscera comes full circle every summer where an amazing film festival is put on in LA showcasing horror films made by women. It's an event that always makes me sad to live on the east coast.
This will all change this weekend however when Viscera comes to Boston! So if you're in the mood to watch some truly mind-blowing and spectacular films, come to the Somerville Theater this Friday and Sunday.
The line up is as follows...

Ticket prices are $8 in advance or $10 at the door.
$15 gives you access to a special "double feature" either Friday or Sunday
and $25 gives you access to all the screenings.
Buy tickets or get more information here
So honestly, how can you want to miss this? If you're in the Boston area and you're a horror fan, I'd better see you in attendance at the wonderful Somerville Theater. If not then we may have some difficulty continuing to be friends.
Posted by Andre Dumas at 6:30 PM

Awesome effort, Andre. Post photos from the events if you can get someone to take them.

I hope it goes great for all of you there in fahkin' Bahston. Anyone who doesn't go is wicked retahded.

If you're not in Bawston, drive a fackin' cah ya fack!

Haha okay everyone settle down not EVERYONE talks like that in Boston. In fact I don't know anybody that does ok? OKAY!?

I sympathise, Andre. I'm Australian and we don't all talk like Steve Irwin. Although I know a guy who dies and he annoys the piss out of me. ;-)

Teacher, he started it! Sorry, I can't help myself.

This is cool...is Viscera the first film festival to "travel" like this? Probably not, but there could be like 5 or 6 throughout the country in a given year or something. Sundance ain't doin that shit.

Wicked Retahded is the best possible name for a Boston-based cock rock cover band. If that doesn't eventually come to fruition, I will think less of the human race.

Wait, so I lived in Somerville all of last year and didn't even know that cool independent horror would get screened there?

Now I feel like a chump. The good news is, I'm still not far from there.

Thanks for the info!