Perfect Movies for Halloween: The Others 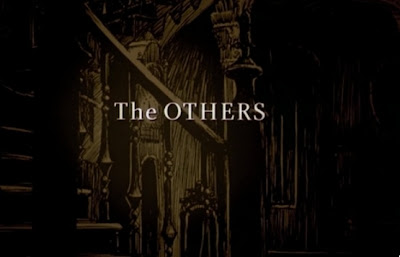 You must forgive me Horror Digest readers---I've been a bit M.I.A as of late. The reasons behind this are simple. At precisely 8PM on Saturday I was possessed by a supernatural entity known as The Wonder Years. This supernatural force seduced me with all of its witty and poignant commentary on the state of the world in the 60s and the state of life as a 12 year old boy. I can't help it if Fred Savage is the cutest thing to ever be created right? 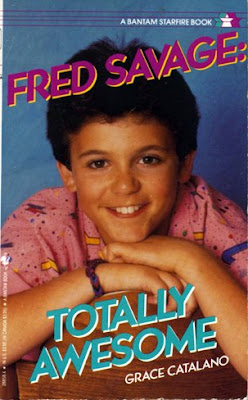 Of course, this possession doesn't explain away the fact that I've been posting about once a week lately. The only answer I can give there is that I'm lazy!
So anyways, at some point last week, I decided to embark on a little project called Perfect Halloween movies. These are movies that I've seen before but not in the comforts of the Autumn season. They are the epitome of spooky, of that crisp fall atmosphere and they're just begging for you to watch them as you curl up on your couch submersed in darkness.
The Others is now streaming on Netflix and as soon as I found that out, I had to watch it immediately. I like the Others because I tend to think that it does ghost stories AND psychological stories right. I also was curious to go back and view it with a fresh opinion on spooky and a minor in Psychology. Plus, I couldn't remember the last time I saw it the whole way through. WARNING: From now on I will be assuming you have seen this movie. If you have not, you may want to cease reading.
While many can find disappointment in The Others, I can find oodles of intriguing bits of psychological nerdy fun! Let me preface this by saying I love psychology. I love psychology so much, that I spend hours diagnosing my "friends" psychological symptoms as they appear on my newsfeed. Who knew that so many people with bi-polar disorder could all be found in one place?
Naturally my interest in Psychology has led this viewing of the Others in a more sad and lonesome territory than before. 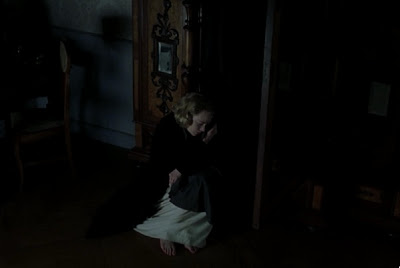 For starters, The Others is like one gigantic PSA for the inherit dangers of being a woman. Sorry, I should say the inherit dangers of being a women, raising two children on her own in post World War II England, in a gigantic house in the middle of nowhere. There seem to be two very apparent things about Grace's mental state. Number one: she is probably suffering from SAD or Season Affective Disorder and two: she has a short fuse.
Seasonal Affective Disorder is primarily assigned to people that are mentally healthy except in the winter seasons where there is less light throughout the day. If you take this disorder and apply it to the fact that Grace must keep the curtains drawn at all times in her house then you get an extended period of Seasonal Affective Disorder OR major depression. Grace is not exposed to a lot of light therefore her moods tend to flow up and down as the days wear on. Put that on top of the fact that she has a short fuse, misses her husband dearly, and lives in the middle of nowhere---and you've got a problem.
You see, I've never really watched The Others with a sympathetic eye towards Grace Stewart. In the past, I've come to see her as an absolute loony who put far too much importance on God and far less importance on the well being of her children. There's also that whole thing about smothering her children with a pillow. On this viewing however I noticed that we are supposed to feel some pity for Grace after all. I say this, because even at the outset of the big reveal--her children and the house servants do not view Grace as any kind of enemy. The children immediately go into her arms as though nothing had ever happened between them. Grace holds them tightly and professes her love for them and the really scary thing is that we believe her. 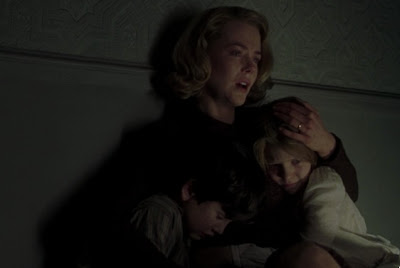 How can this be? How can we feel sympathy towards a women that completely snaps and kills her children? Maybe it's because of the closeness we feel towards Grace. At times it's almost like we're intruding on some secretive emotional upheaval. Like we should look away to give her some privacy. We tend to feel her moments of complete and utter hopelessness. Her feelings of isolation, of sadness and of grief. 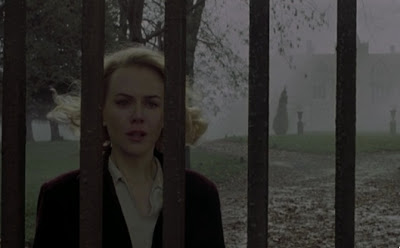 Her unwillingness to accept her husband's death and her powerlessness to stop the revelation at the film's conclusion. 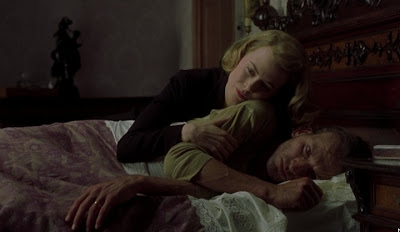 Although on this viewing I concentrated more on the psychological implications, I still couldn't help but notice how insanely creepy several moments in this film are. For instance, I am still finding it difficult to find a horror movie released within the past decade that has a better creeptastic moment than when the scary old woman possesses the little girl. That is SO fucked up right? From the first glimpse that something is wrong---we see a pair of old and wrinkled hands playing with the marionettes, to the whites of the old woman's eyes underneath the first communion veil. And the real kicker that the old woman speaks in the little girl's voice. It still gives me the creeps. 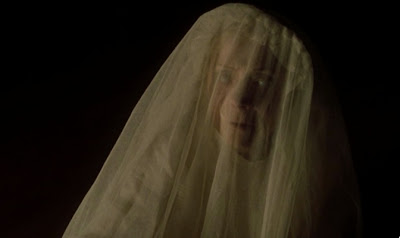 Also fun and creepy---the whispers of the "intruders", when Grace is searching for someone in the room with all the sheets. 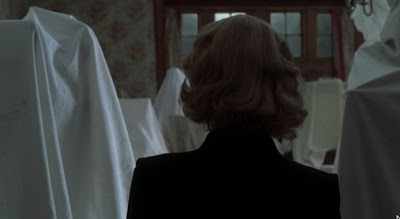 The shocking and surprising occurrence of a scary man's face behind Grace (which turns out to merely be a painting), flipping through the death album 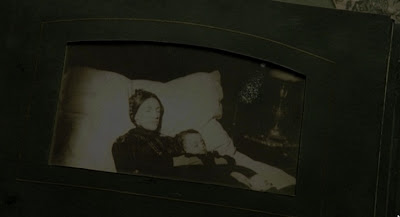 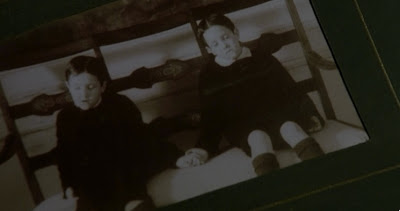 ---and my personal favorite---the drawing of the old woman. 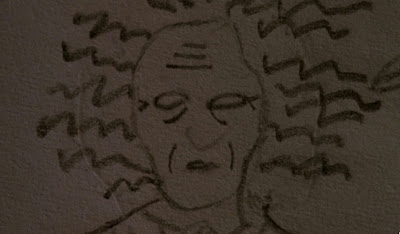 If there's one thing that always tends to freak me out, it's crude drawings of scary old women. I'm not kidding either. There's something about a child's take on a witch or scary old woman that sends shivers down my spine. In looking at this drawing of the old woman, I'm reminded of that scene in Blair Witch where a drawing of what the Blair Witch supposedly looks like is shown. It's just the idea that something like that could exist, that really gets to me. Scary old ladies really get to me I guess.
Overall--I still find the Others to be one of the better ghost stories of all time. Many may not agree, but I find that there is a lot to admire here and plenty to give you goosebumps during the Halloween season.
Posted by Andre Dumas at 9:44 PM

This movie is a modern horror classic. I think it's pretty much flawless and doesn't get cited nearly often enough when people put together 'Best Of' lists.

This movie is creepy as Hell, good though.

Everything you said about The Others is right on. I would add, however, that it's one of the rare examples of a modern horror movie without special effects and it's all the better for it. Can you imagine what it would be like with the horrible CGI they throw at every movie? It is truly a creepy classic.

Agreement with the other commenters.

This would make a good companion to "The Innocents" (1961). Both period pieces. Got a female lead caring for two unusual children (boy & girl). She's seeing/hearing things, but others are doubting her claims. She gets increasingly stressed and maybe going nuts from it all.

I think The Others got an oddly bad rap from the horror community who just find it easy to dislike Nicole Kidman. My only problem with the film is that the trailer--which I recall seeing EVERYWHERE at the time--gives away the film's best scare, the creepy "Ma'am! I AM your daughter" communion scene. As a film though, The Others is quite good.

Have you seen 1961's The Innocents? I just caught it on TCM and it definitely shares some stylish tricks. A high recommend along the same lines.

I love the Innocents! It's definitely one of my all time favorite spooky movies. I even had to turn the lights on while I was watching it...! Which doesn't happen too often these days.