The Woman in Black: Cat Approved

Last night I made chicken wings and decided that it was high time for a me to watch a horror movie that made me actually want to watch more horror movies. So Monkey and I got cozy, turned off the lights and paid $15 bucks to watch The Woman in Black. Why pay $15 bucks you ask? Why not? Yes, I suppose I could have waited until the Amazon video rental was available on May 22nd, but that was like.... a week away. Who knows what could happen between then and now?

I've always wanted to watch the original Woman in Black, as I've heard countless stories about how creepy and atmospheric it is. 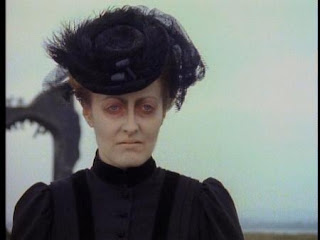 Unfortunately the original Woman in Black is banished to only people with VHS players can watch it land and so I  had to live vicariously through other people's experiences.

That all changed when it was announced that they would be remaking the Woman in Black and that Harry Potter would be taking the main role. Remakes for many are a sore subject. I get it, I really do. But in some instances---especially this one they can oftentimes be extremely beneficial. Movies that didn't get fairly treated their first time out, movies that are in no man's land as far as availability go, movies with great stories but maybe not so great execution--those are candidates for remakes that I can get behind. Which is why, I was all for a remake of The Woman in Black. Plus also I might have a crush on Daniel Radcliffe.

The Woman in Black follows Arthur Kipps, a solicitor who is given the task of handling the estate of a deceased woman named Alice Drablow. Upon arriving in the creepy town, Arthur finds Alice's estate to be in a secluded and scary island marsh. Once there, he starts uncovering some truly creepy and unnerving things about both Alice, her sister, and the town itself.

Let me just begin by saying that... god damn this is pretty scary. Right so I'm a scaredy-cat whatever and yes there are plenty of jumps and unfair scares like that but if you look past all that, you should eventually realize that this movie is straight up creepy period. A woman in black who just stands and watches people? Creepy. Children who for no explicable reason decide to kill themselves? Creepy. Children with red hair? Creepy.

I just can't get over how unnerving that damn woman in black was! Especially the scene where Arthur is outside the manor then looks up at the window and sees her in the window!

Fuck that shit man. There were several moments during this where I almost opted for the hands over the eyes method of keeping my cool. However, I switched at the last minute to the petting my cat method instead in favor of preserving my dignity. Needless to say--Monkey was also very scared and welcomed this decision.

This movie has about every single horror convention that drives me up the wall in terms of losing my cool. Characters looking at a creepy figure in the distance. Check. Suddenly inserting said creepy figure now behind our character. Check. Scary dolls that have no place being in a child's room. Check. Rocking chairs that rock by themselves. Check. Hanging people. Check. God damn it Woman in Black, you really spooked me. Also big props to Arthur Kipps for keeping HIS cool. If that was me I would be dead of fright in about .2 seconds.

Sure, there are a few things here in there that rub me the wrong way. For one--I still can't get used to the idea of Daniel Radcliffe being a believable father figure. The dreaded epilogue of Harry Potter pretty much was laugh out loud hilarious in terms of un-believability. This is a little better although by not much.

Right, people got married young and had kids young back then. But I don't know...there's just something about Harry Potter being a dad that makes me giggle.Maybe it's because I would rather him being in a movie about having sex with me. Too much information? I apologize... blame it on the chicken wings.

The film also is a bit slow in the beginning but again, the atmosphere is so nice that I really didn't mind this all too much.

What I really, REALLY enjoyed however was that the appeal of the ghost story never waivers. I kept waiting for that point in the movie where the ghost stops being scary and we realize that they are our friend. Well guess what? Woman in black ain't our friend man, nor will she ever be because she is one scary bitch.

I love that about this movie. I love how there isn't some crazy, ill-conceived plot twist or an AHA GOTCHA moment at the film's conclusion. Just straight up creepiness and god damn, squeeze your cat, moments of surprise.

This one comes highly recommended from me folks. So get ready to rent it on Amazon May 22nd and be excited about it. Although I do not recommend watching it in the dark when you have a menacing looking towel hanging on your door. Your cat may get scared. ....Especially if by chance your cat is not wearing their glasses. Terrible, terrible idea.

You can watch the original version on YouTube so it's no longer confined to VHS player owners. ;) http://youtu.be/qpl9pVHh8LA

What's strange is that for some stupid reason, Woman in Black is only being released in Australian thetres NOW! Lesson learned: While Oz and England are still part of the commonwealth, it doesn't mean that we're going to get the new series of Sherlock before Russia (of all places!)!

As one of those people who has told you countless times about the original (apologies for that!), I'm glad you liked the remake. I liked it a lot as well. Thought it was really atmospheric and well done.

I love love love the '89 version, it's in my top five, all time. But this new version is a satisfying addition to the ghost story ranks.
My not having been a big Harry Potter fan, it was probably easier for me to buy him as a father.

Of course, I don't want to sleep with Daniel Radcliffe, either - so I can see how you might be upset :)

I love your blog!!!! I'm getting caught up and reading all your movie reviews. Just finished Trollhunter and loved it. Glad to hear WB is worth it!!! i will definitely watch it. Keep up the amazing work!

Agreed about how important it was that The Woman In Black NOT be good. I HATE ghost stories once they reach that point where the ghost teams up with our heroes, and I LOVED how they avoided that here. The obvious jump scares hurt the film for me, but other than that, I was pleasantly surprised with it as well.

Isnt this yarn in every short story horror collection ever put together? its like if someone made the bloody hook on the car door handle movie.

I love your blog and follow it all the time! Your reviews are so funny! On The Woman in Black I saw it the other day and was quite board. I agree it was slow in the beginning. And I can't to this day see Daniel Radcliffe as a dad.

But the scary parts were creep as hell. But the ending was so not what I expected and I actually didn't like it at all. I thought it was a bit cheesy. But love your pov!

Well who doesn't want to fuck Daniel Radcliffe?
I mean, lots of people, but whatever, I'm sure there are a couple other people who want to...
Mr. Potter, show me your magic.

Before the first film, this was a stage play, and if you ever get a chance to see it, do!!! I saw it when I was quite young, and I spent most of the play cowering with my hands over my eyes, I've never seen a film or anything quite as terrifying as that play.

It was also especially cool being only a 2 man cast, as a play-within-a-play, with the woman not listed in the cast notes. The program also listed a bunch of ghost stories about the theatre. Awesome.

What a stupid drama.