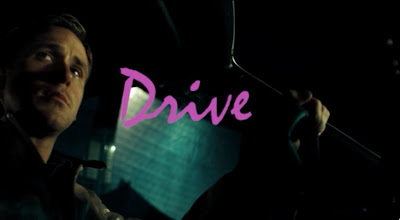 Yeah, I watched Drive. Finally. If I waited any longer the fanboys and girls would have yelled things at me. Things like:  WHY HAVEN'T YOU WATCHED DRIVE IT'S THE BEST MOVIE EVER OH MY GOD SO GOOD. In all caps because their pants would probably have been on fire.

Seriously though. This movie is big. People are obsessed with it and want to have its baby. Or Ryan Gosling's..I'm still not sure which. Anyways. I watched it. And I was just kind of like yeah okay. He's quiet. There are weird 80s-like montages. He drives a little. (Really it's not that much driving okay?) There's blood. Stab stab. The end. I don't know, I'm confused maybe I should watch it again?

Yeah, so I watched Drive. Again. It's pretty good you guys. Although it's also not at all what I expected. I expected big flashes of awesome all up in my face....and..... I don't know....zestiness....? I'm not sure what I expected actually, but it definitely wasn't this.

The hype-monster can be a very dangerous beast. In fact, it's probably the main reason I didn't necessarily love this movie. Yes, it's good. There are several really, really, good things about it. But I expected so much more out of it--and that's the problem with the hype-monster. It does mean things to you. It becomes in essence a critique of the film even though it has nothing to do with it. It's not the movie's fault that a lot of people talked about how it was the 2nd coming of Christ. And yet---people say it was good--BUT then they say... 'I expected it to be better because a lot of people's pants were on fire.'

See? That stinks. If I saw this blindly, without any serious hype attached to it, then I would have been like wow, that was pretty damn good. And right okay, I am still saying that but I'm also saying, 'is that all you got?'

I'm not even sure what I'm trying to say here because I did enjoy this. It kind of sneaks up on you in a way you certainly don't expect. Ryan Gosling's character is this gigantic enigma that fills you with frustration and intrigue and sadness and fear all at the same time. WHO IS HE?! 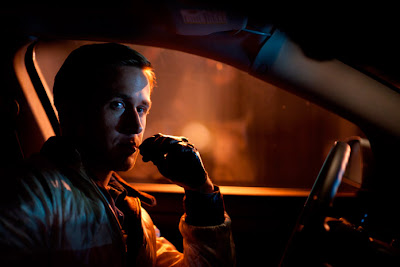 We'll never know. And you want to know but at the same time--you don't want to know. That is pretty neat. It's like never knowing what is beyond the closet in Poltergeist. You want to know so badly but you know that it's probably best if you don't know.

Drive is like that in its entirety. There's this whole underlying secret tucked away somewhere but we're really never let in on it are we? Yes, it is awesome but we'll never know really how awesome it is. Interesting. I'm interested. And now I will continue to ponder this while I pet my cat and eat raspberries.

It's a simple yet stylish film, it's got lots of cool to it. Aside from the visuals, I also loved that soundtrack, they chose some pretty cool songs they put on this movie.

Hey, Andre, I JUST watched this last Saturday and had the same reaction you did, once again proving we must be distantly related somehow.

When I saw the ultra-retro 80's title graphics, I knew I was going to be in for a sweet ride. Little did I know how sweet.

The filmmakers made it look so easy - such a simple, straightforward plot, but they made it seem so poetic.

And I agree with the previous comment, that the soundtrack was excellent.

i watched it twice in a row too. albert brooks scared the shit out of me and i never thought id say that. his knife and razor collection was really disturbing and ryan gosling somehow pulled off that ridiculous scorpion jacket.

I feel a little bit guilty saying that Drive needed more driving. When the action comes it is tense and artfully done without shying away from the extreme violence, but that all starts to go away as soon as the characters start talking, or sighing and looking at each other. Nice review.

The only thing I didn't like about Drive was they did go a bit overboard in the "Get it, he's an antihero" department.

I was a bigger fan of Bronson. That movie is crazy. Literally; some of it takes place in a mental ward. Tom Hardy plays a tremendously jacked British prisoner, who beats the shit out of tons of people in prison, and puts on a play in front of his...mind audience? I don't even know.
It's incredibly violent. He's damn near naked for most of it, which gets kind of awkward, though my girlfriend didn't seem to mind...

They sell that Scorpion jacket. Ryan Gosling not included.

I, along with most other living human beings, totally fucking loved this movie. I know some argue that it's more style than story, but I call shenanigans. It's not what he says or doesn't say - it's his ACTIONS that speak volumes. I love Drive. I love Gosling. I'm going to watch it eleventy more times.