Random Movie Quotes To Use in Everyday Life 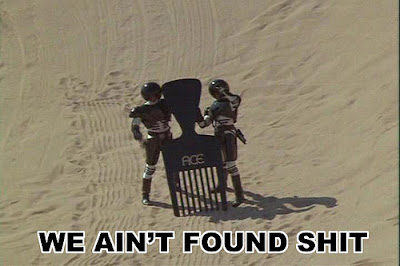 One of my best qualities is my uncanny ability to turn a regular old movie quote into an acceptable everyday saying. Well okay fine, most of the time it's not acceptable. In fact 80% of the time it doesn't even make sense..but that's what makes it great. It's almost exactly the same reason that people find Gary Busey amusing. 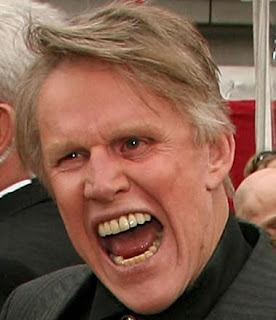 My post on How to Use Eccentric Poltergeist Quotes in Everyday Life is probably my favorite post of all time. It was delightfully fun to write and it was a perfect sample of the kind of everyday conversations I have--usually with my sister. In fact, I think I used the "She's just a bay-bee" line at least twice this week.

After I transformed my blog into a blanket 'I'm going to talk about random shit' blog, I immediately decided I would have to bring back the random movie quotes for everyday life post. Which brings me to the here and now where any movies are game for my awesome conversational skills (or talking out loud to myself skills) (which tends to happen a lot more these days the longer that I depend on my cat for stimulating conversations). 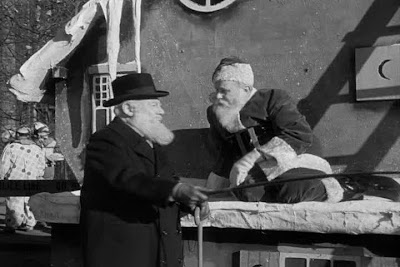 As of late, this has been my #1 random movie quote, usually because I get caught doing something I shouldn't be. Only in my case it's not drinking liquor moments before I have to be Santa Claus in the Macy's Thanksgiving Day Parade---it's eating a giant sandwich, or buying more clothes when I don't have any money. Sometimes I even just say this when my sister is mad at me for not emptying the dishwasher. It pretty much works for any situation where you're justifying some kind of wrong doing.  Observe:

"Damn it Andre why did you use the last egg?!"
"A man's gotta do something to keep warm!"

This one is just all around good for getting mad about something. It doesn't even have to do with technology...it can be literally anything. Often times my sister and I lament the fact that the T is too crowded at rush hour by saying we hate this hacker crap. I've also been known lambaste the heat OR the cold (hey, I don't discriminate!) by again saying that I hate this hacker crap. What does 100 degree weather have to do with hacker crap? Nothing. See!? That's why it's great!

"Who the Hell is John F. Kennedy?"
(Back to the Future) 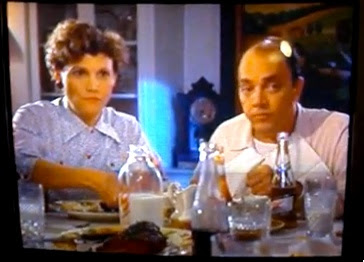 Is this not one of the best lines in Back to the Future or what? It's hilarious. The comedic timing. The complete 'what the fuck' tone of Lorraine's father's voice. Man. But anyways--this is a perennial favorite to say in the Dumas household, usually when someone's name is spoken, I'll just throw it in there casually.  It really doesn't work at all.

"So then Donna Flugenheimer said.."
"Who the hell is John F. Kennedy?"

See? It's terrible. I mean I guess if I really wanted to make this work I would say,

"Who the hell is Donna Flugenheimer?"

But clearly, my maturity isn't up to those standards.

Plus we love John F. Kennedy in my house. He's even taped to our front door! 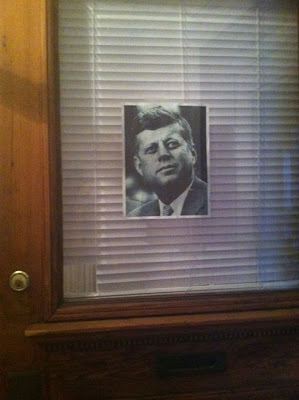 Do we know how to party or what?

"Good For You and Your Father"
(Pee Wee's Big Adventure)

This is a truly great one to say anytime someone is boasting about something. Not even bragging maybe more if they're just telling you they did something. Like,

"So today, I went to the grocery store!"
"Good for you and your father"

As my sister found out recently, this quote is not great to use in situations where the other person has no clue what you're talking about. Well, I guess all of these would fit under that category but this one especially seems to catch people off guard. Look, I'll bring your father into this whether you like it or not PAL. What's that? You don't have a father? Yeah well......GOOD FOR YOU AND YOUR FATHER.

HA! see it works all the time.

Anytime somebody needs an 'update' on something or wants to know how something's going--this is probably your go to movie quote. For instance, occasionally people ask me how the 'dating scene' is. Clearly the answer is always, "We ain't found shit!"

"But I was going into Tosche Station to Pick Up Some Power Converters!"
(Star Wars)

This is the best to use anytime you're feeling especially whinny. Is that how you spell whinny? It looks a little like Whinny Cooper. 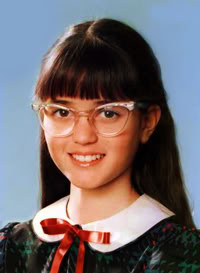 Ahem, anyways. Often times my sister asks me to do something and I usually respond with this quote. I mean come on, I obviously have more important things to do like pick up some power converters at the Tosche Station....... let's get real...here please.

"I've had it with this dump! We got no FOOD. We got no JOBS. OUR PETS HEADS ARE FALLING OFF!!!"
(Dumb and Dumber)

Lately my sister and I have been saying this a lot. Probably because these past few months we've successfully realized that our futures consist of moping around while we lament the fact that we have no money and no food. Our pets heads aren't falling off (Puhlease, our cats heads are way too cute to fall off) so we're actually not looking too bad when you look at it that way. But ultimately, we've had it with this dump. 'This dump' being our lives.

"Why Do You Do This To Me Dimmy?"
(The Exorcist)

I'm sure the better man would find a way to use, "Your mother sucks cocks in hell" in everyday life but I like to go for the unexpected which is why my go to Exorcist line is always this one. Typically used when someone does something really mean to me like...... says I can't eat a sandwich. Or if they forcefully suggest I empty the dishwasher. Hmm why are people always trying to make me empty the dishwasher? I HATE THIS HACKER CRAP! Oh sorry...wrong random quote for everyday life. I should mention also that it's important to say this quote like a sad old lady. Occasionally you can say it like a possessed young girl who has taken the form of a priest's old dead mother. It really makes a statement when you do it that way.

I see you, hidden Wayne's World reference at the end of the JFK section. :)

I use that "Why you do this to me Dimmy?" quote all the time at work whenever something screws up on me which seems to be quite often. Only been heard on a few occasions (that I know of) and have never been called on it. Hopefully those who did hear it are cool enough to get the reference.

I almost threw out "Everyone has to eat shaving cream once in a while" (a la The Stuff) once when my boss made a comment about doing the dirty work, but I figured the explanation wasn't worth the personal victory.

All of yours would work well though.

Knew you'd catch the WW quotage TH!
Actually I had a few Wayne's Worlds on tap for this like whenever my sister and get in a minor disagreement we do the "Fine, fine so go, then go then." fight.

Also, "i'm not going to jail for you or anyone!"