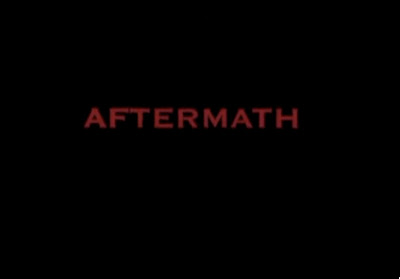 There was a brief period in my life when I considered being a medical examiner. By brief period I mean about one hour out of the entire 24 years of my life. My thinking was that hey--I've always secretly wanted to be a doctor but was too afraid I would kill someone so......if the person is already dead then....... right. I imagine that's the same logic a serial killer employs when they think about becoming a medical examiner--or the logic that our resident pervy medical examiner from Aftermath employed at least. Like-- hey I've always wanted to rape someone but didn't want to get caught. Yup.
In the film which runs at about 28 minutes, features a snapshot of a medical examiner's nightly routine. As we soon find out, the man has a very unhealthy relationship with his work. Somehow the term necrophiliac just doesn't seem like a good enough word to describe this horror.
After subjecting myself to 28 minutes of Aftermath (which is still too long in my opinion) I have come to the conclusion that everything that is said about Aftermath--is true. It is vile, disgusting, nauseating, intriguing, well done (admit it) and ultimately very--disturbing. It is in fact so disturbing that I felt incredibly bad for the dead girl getting raped because it looked so painful. He literally *fucks* her with a knife. There's also this whole idea of him being physically turned on by the insides of a body. He masturbates with his hand inside of the woman's chest... 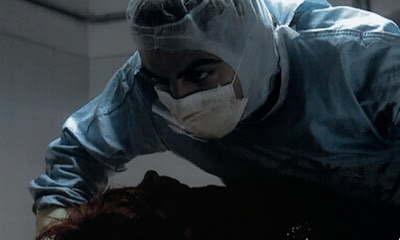 I should mention that when I say "dead girl" I don't mean a zombie girl getting raped by a couple of high school students looking to get laid. I mean of course a dead girl whose body has been given a complete autopsy. This short snippet of vileness never hides what is going on. It is very blatantly a raping of a dead, bloody and disgusting body. This act is so horrifying that it is very clearly one of those can't look away moments. It's simultaneously the most horrific and exciting car accident that you will ever see.

Once when I was back in my staying up really late and watching weird TV shows stage, I caught a program that showed a real life autopsy being performed. I can tell you right now that the gore, and the procedure in Aftermath was scarily similar to this in almost every way. The detail of the layers of yellow fat underneath the skin made my stomach turn and I am not easily squeamish. Aftermath is one of those situations where the gore is too real for comfort. It's like watching one of those surgery shows on TV--it's not entertaining when it's real and Aftermath feels so real.

The gore however isn't really the truly disturbing aspect of the film though. Mostly it's the rape of a dead body--but it's also just the inclusion of the dead bodies in the environment of that cold and empty room. 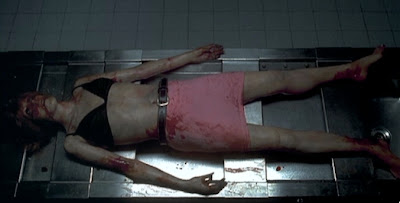 Something about how dead the people were, and what happens to them both in the raping sense and in just the plain autopsy sense is very invasive. Their bodies in both instances are treated with a sort of violence that is equally hard to withstand. On the autopsy side, organs are spilled out and violently shoved back into the chest cavity. They are sewn up, briefly hosed down and stuffed bloody body and all into a plastic bag. 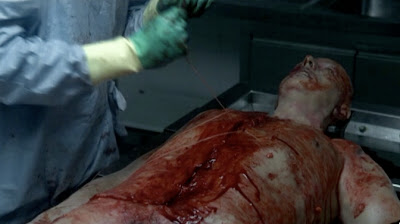 It was just a very strange instance of shamefulness for me. I felt like I was invading on someones privacy. I for some reason (maybe because I'm human) do not enjoy watching someone get raped who cannot fight back. It's a very eerie thing to watch unfold.

There's surprisingly a great amount of things happening in Aftermath. We don't know anyone's names except for the victims for instance--which again is only further expanding on the idea of how exposed they are. Their naked dead body parts are everywhere (dead vagina is terrifying by the way) and we know their names. The implications of that simple concept are quite powerful if you think about it. The most we really see of the pervy guy is his eyes-- 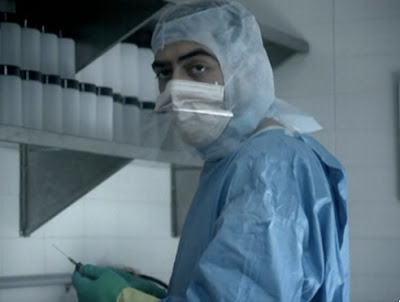 while on the flip side, we literally see every single part of the dead people--inside and out. To suggest that a dead body has more outwardly characteristics noted is saying a great deal about the perv. Is he really a person if we know nothing about him? It's pretty obvious to see that he is not in a wider sense a human being. He is a monster.

It's things like this that make Aftermath more interesting than I would have anticipated. Normally I would cast this film off as just a giant yell for attention. An attempt to be as disturbing as you can be. But I do sense there is a point to all this madness. In a film that is largely about every disgusting detail of every organ in the human body-- when there is a shot as simple and tasteful as this thrown in 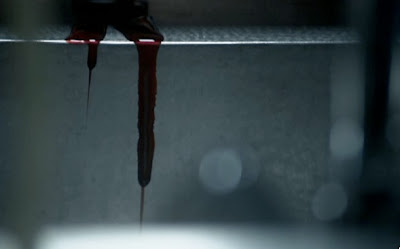 it means something. Yes it is disgusting, and hard to watch but it is also an interesting commentary on so many things--and it's only 28 minutes long. That friends, is impressive. One day I will examine this film more closely and prove to you all just how intelligent it may in fact be.
Posted by Andre Dumas at 10:00 PM

Just linked over here from "Kindertrauma" and this is the first thing I read.I am a huge horror fan and cannot believe I've never heard of this 'movie'.Your review was engaging and I loved how you pointed out the simple,artistic shot of dripping blood.Something that could be lost to a lesser eye.I only briefly had time to scroll down the first page,but I shall be back....

Ah, thank you amrith for stopping by! Kindertrauma is a good friend and my first horror blog experience..!

if you have Netflix, Aftermath is on Instant Watch. Be aware of the dead vagina...it's very frightening.

But seriously thank you so much for showing some support and I hope to see you back : )

Not to be disrespectful of the dead or anything--but I know all about dead vagina and other areas from my experiences while being a nurse on the night shift and having to prepare the deceased for the morgue.You would cringe to know all that's involved in that.I have returned.... ;0)

The thought of this happening to a loved one while you're grieving their death is unbelievably disturbing...and you gotta admit, that guy really looks like Mr. Bean with the mask on!

For the life of me I don't really know why, but I love this movie. I'm not exactly a gorehound either, but Aftermath just fascinates me to no end. I think what really takes me about the whole thing is how clinically precise all the shots and compositions are, coupled with the morbid curiosity of seeing death in in the full glare of an examiner's light. It's strangely beautiful and beautifully strange. Great review, Andre! I always enjoy seeing other people's thoughts on this bizarre film. If you're interested, you can take a peek at my thoughts here:

Wow. I can imagine what a real dead vagina looks like. This was quite alarming to me in the film, as it's a vagina very clearly like....I felt like a gynecologist (I don't have spellcheck on this computer don't mind me)

B.Stank I thought he kind of oddly looked like Javier Bardem..!

Joe M- I agree with you 100%. By all accounts we should probably not like this film as much as we do..but something is there oh yes something is definitely there..! I'll read your review of course. !

I think it's worth looking at Aftermath in the context of Nacho Cerda's other short films, The Awakening and Genesis. The former was a student film that he made before Aftermath and is an old-hat predictable story; the latter is the short he made after Aftermath.

They all look at death from different viewpoints.

I have found myself sticking up for the artistic merits of Aftermath more than a few times. It is disturbing as all hell, but it is brilliantly crafted. The shots are so sharp, the music perfect and no dialogue just makes it all the more impersonal.

Pearce up above mentions the other films in Cerda's death trilogy, and I highly recommend checking out Genesis, which is also on instant watch. It's a vastly different take on death, instead of showing how meaningless a human being's life (or lack of it) can be to one person, it focuses on how important life is to another. It's what you would call a beautiful movie in many ways.

Great review, and I am happy to hear that you are of the mindset that you can appreciate something like this beyond its often perceived face value.

Oh, and I can't imagine how badly dead vagina chaffs. Or can I?!

Great review! I felt very much the same way when I first saw this flick years ago. I was horrified, intrigued, disgusted, interested...

I have to admit that the 2nd viewing had a deeper effect on me too. I don't know why, but it seemed much more disturbing the 2nd time.

Anyways, LOVE the blog!! I found it a couple nights ago and have it bookmarked. Your taste in horror movies is quite similar to mine. I have been reading through your reviews and putting the ones you liked, that I haven't seen yet, on my "list". Lake Mungo is at the very top!! :-)

Thanks Pearce! I will seek those out, sounds very interesting.

Matt- Nice. For some reason I had remembered hearing only awful things about Aftermath, probably just from people that can't handle disturbing things actually representing art but I was fully impressed here. And I will definitely check out those other films..!

Abigail- Hello! Thank you for stopping by, I love finding people with similar taste to mine. And you are 100% cool right now for putting Lake Mungo at the top of your list. I recommend that movie to everyone. I hope you enjoy it, let me know how it goes!

This is the first review I've read here but I'd never heard of this film. As disgusting as it seems, I am really am curious to check it out. Thanks for shedding light to this one!