Have You Ever Seen Sisters? 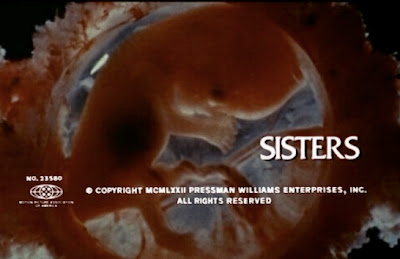 After having just pushed the stop button at the end of Sisters, I was filled with the sort of rage I've only experienced a few times before. Why, had no one told me to see this movie sooner?! Watching Brian De Palma's psychological thriller starring Margot Kidder as a French Canadian model and Jennifer Salt as a sassy feminist reporter, was like finding an uneaten sandwich in my refrigerator. In other words--it was the best thing ever. I ask the question, have you ever seen Sisters? Because I feel an obligation to prevent anyone from feeling the same rage that I did afterwards. So please if you have not, see this right away (It's on Netflix Instant!).
Jennifer Salt plays Grace Collier, a reporter who glances out her window to see a bloody man's hand trying to get her attention. Believing to have witnessed a murder, Grace gets the police involved who go with her to question the woman, Danielle, in the apartment. They find nothing, but Grace is not convinced that Danielle is innocent and believes she and a mysterious man have covered up the murder. What follows is a mind bending journey into a curious world of siamese twins and a startling discovery of the psyche. 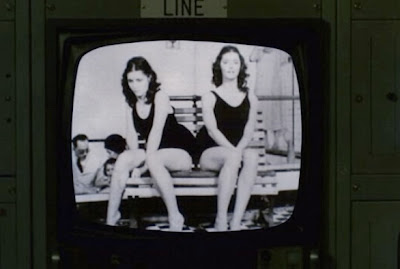 Of course that merely skims the surface, but I don't want to ruin the whole experience ya know?
Sisters, is perhaps one of De Palma's most Hitchcockian films, even going so far as to use Bernard Hermann to write the score. I'm not one to spoil things but unfortunately I spoiled everything for myself by guessing the plot twist fairly early on. Whether this is due to my own heightened intelligence, or merely the fact that this film was so Hitchcockian that it had me connecting it to my very favorite of his films.....remains to be seen. I do think however that it is pretty predictable so don't put up a fuss if you think that I just ruined everything.
From the moment the film begins, we sense that there is a mystery to be had somewhere. It's a feeling we get in the score, a curious note of suspicion and the slightest hint of anxiety and we find that we are eager to get down to business. But do we get there right away? Not entirely, but that's okay with me because getting there is half the fun. There's the blatant racism in giving the black guy on the game show a gift certificate to a club called "The African Room" 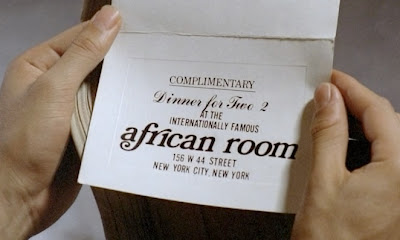 and the fact that the waiters there wear grass skirts, even as they are ejecting Danielle's ex-husband from the bar. Silly game shows, Olympia Dukakis as a bakery shop employee (!!) and just merely the way that we feel like we are watching the calm before the storm. The sensual couch sex scene is suddenly marred by the camera's discovery of a very gnarly scar on Danielle. 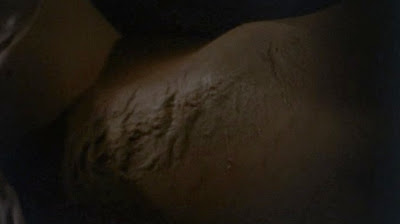 This is both gross and highly interesting because it's a discovery that only the camera makes and not one that Phillip makes. This again calls into question the very idea of voyeurism and giving us the audience, the voyeurs, a look at a very important clue.
The first murder is downright distressing. 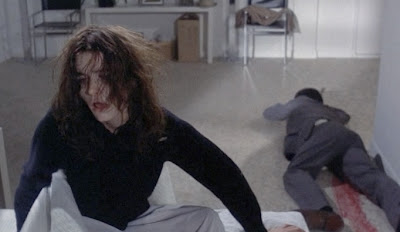 To say I expected it would be a lie, although I knew something was wrong but....it's pretty intense. The angles of the knife going into places that didn't seem possible, and seeing skin hanging off in the slightest, simplest way is grotesque and fantastic. That whole scene just blew me away. Then the most wonderful of all the split screen shots--Phillip crawls to the window for help, and at the same time we see him through Grace's window. 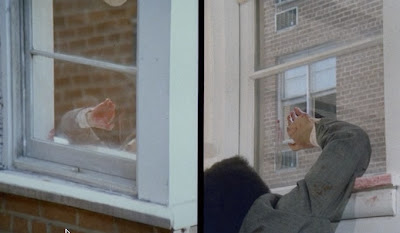 I suppose this was before people started playing practical jokes on people with ketchup, because Grace sees a man with red hands and immediately cries out murder. She says she saw it all go down but I don't know if I believe her.
I also noticed something entirely interesting while watching Danielle's ex-husband clean up the mess. He tells Danielle to go put on make up and act like nothing has happened. Up to the point when Danielle opens the door for the police, we find that we like her. In the same way that we feel bad for Norman Bates, we feel a sense of sympathy for Danielle who has apparently done nothing wrong.
Yet when she opens the door she becomes well--a different person. A liar, and someone who seems very comfortable acting natural and completely fine when questions of murder arise. It's a similar shift when Norman Bates is questioned by Arborgast. We as the audience know what happened and for some reason, seeing these character's outwardly lie to the authorities doesn't sit well and we begin to dislike them, or distrust them. I decided this was because in both instances we cared about the victim. I won't pretend that I didn't have a deep connection with Phillip--he did buy his one night stand a birthday cake for Pete's sake! So when all is said and done, and we see Danielle suddenly pretending and possibly actually acting like a Sociopath--we can't help but feel disdain.
I would also like to point out that the idea of hiding a body in a pull out couch is gross/ awesome. Why did I never think of it? 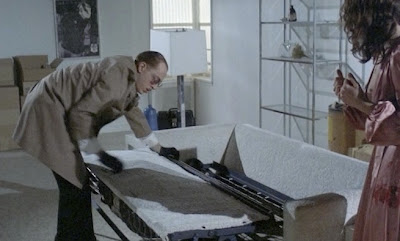 The best part about the film for me was the duality often explored. Both in terms of Danielle and her apparent twin sister Domonique, or in the dual, split screen shots, showing two events happening at the same time. There's also too the idea of putting us front and center in Danielle's life, and then switching over to Grace's. It gives both actresses an equal amount of alone screen time and offers up a suggestion of the whole yin and yang concept. A fair amount can also be said at the several instances of juxtaposition utilized throughout-- my favorite being the scene where shots of Danielle writhing on the bathroom floor 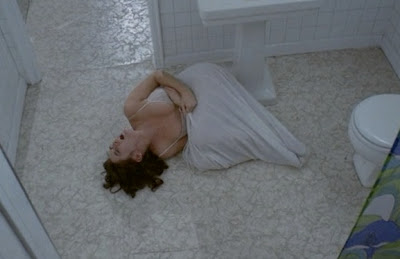 were juxtaposed with glimpses of the birthday cake being decorated, a sickening, sweet tinkling of piano keys accompanying it. 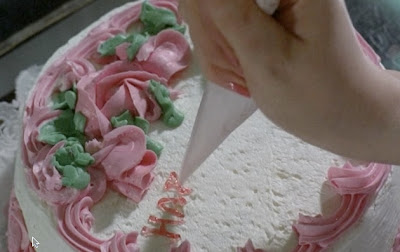 Also prominent, is the very concept of voyeurism; someone watching someone else and we as viewers watching all of it! Not to mention how we get it quite literally in the film's opening game show. 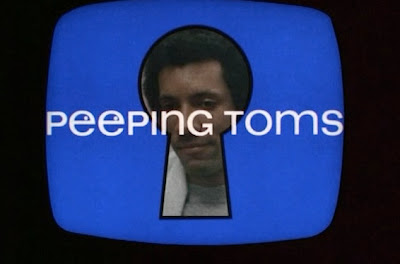 It's enough to make your head hurt, but in a good way of course.
By the end of the film, and the big unveiling of the plot twist that we saw coming a mile away, I suppose there is a slight bit of disappointment. No big wrap up speech by a psychologist, no ultimate conclusion that can be drawn. Just a strange, open ended...ending. The scenes inside the clinic and the flashbacks through the eyes of Grace are confusing, especially to those morons on the IMDB forum. Please be advised that Grace is NOT Domonique. But those flashbacks are very surreal and creepy in and of themselves, and while the discovery of Danielle and Dominque's past is not as thrilling as I had hoped, those scenes at the end, are pretty great.
I LOVE, love love LOVE that germ-o-phobe, OCD woman (watch the clip). And the twisted way that the final murder happens. I don't necessarily love what ends up happening to Grace and I felt like it was only used so that the film could be shorter. But it shouldn't matter because the police came right away to the clinic! Ahhh now I don't know what to think. Perhaps they were right, curiousity does kill the cat.
In any case, you should watch Sisters right away and especially if you are in the mood for a 70s psychological thriller starring Margot Kidder and in the style of Alfred Hitchcock--except with some boobs and a lot more blood. Do it now!
Here is the first murder
Posted by Andre Dumas at 11:00 AM

YES! Great flick. I actually considered doing a slight piece on this recently, because I was at a wedding and realized that every time I hear that "let no man put asunder" line I think of this movie.

Curious, have you seen many other De Palma flicks? He has a slew of Hitchcock "homages" you'd probably dig if you like this, though I don't think many of them top this one.

I've seen a fair amount I think but could always use more of course! I'm glad you've seen it The Mike but I'm NOT glad that you didn't recommend it to me! Hehe.

To make it up, Dressed to Kill and Blow Out are the two I'd recommend most. :)

Oh, and The Phantom of the Paradise!

This is one terrific film - I first saw it very late at night in the pre cable days (late 70's), a year or two after I'd graduated high school and it knocked me out.

Something about that final scene at the train station, and Dolph Sweet working on the telephone pole, while the sofa is sitting near the tracks...that stayed with me.

Haha thanks The Mike- I'll be loading up the queue now!

Pax- Isn't that so bizarre? People have wasted away trying to possibly come to terms with what that last shot could mean. I like to think of it as coming full circle. We open with the game show about voyeurism and end with Dolph Sweet being a voyeur. Pretty awesome if you ask me. Also you KNOW no one is coming for that couch haha..

Definitely a good film that's Hitchcockian in every way possible. De Palma is obsessed with Hitchcock, which is why most of his early films are blatant homages. I think BLOW OUT is probably the most explicit one, but DRESSED TO KILL and also CARRIE is Hitchcockian in a lot of ways. Definitely an underrated horror flick that deserves more attention. Skip the remake that came out in the 2000s. Not worth your time. Great review.

I saw this film after reading your great review..I agree with the fact that the film is extremely Hitchcockian. the first part was pretty good..the second, not that much. It is great if we think that it was mad in the late 70s..but I prefer other ones, from dear old Brian (Carrie!)