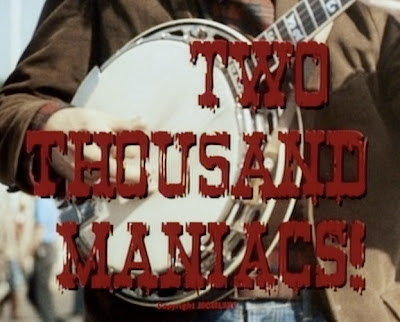 Once upon a time, I stumbled across a movie that I thought would be terrible. I still thought it was terrible when I decided to show it to a friend of mine the very next day. Halfway through that second viewing however, I realized that I didn't think it was terrible--I just secretly loved it. That movie was 2001 Maniacs. Typically I hate movies with a lot of boobs, and a lot of really pointless really ridiculous gore but 2001 Maniacs really struck a chord with me. Sure I wasn't crazy about those extended length soft core porn scenes, or that fact that these old time civil war people were wearing clothes from Hot Topic, but I still rather enjoyed this here flick.
Fast forward to yesterday when I watched Herschell Gordon Lewis' original Two Thousand Maniacs. I'm not sure why, but when I read the description for this film way back when I started up my Netflix account, I thought it would be in black and white, and boring--a far cry from the likes of the campy, splatter gore fest in the more recent remake. Not that I had problem with that of course but that is simply what I envisioned. Well, boy was I wrong! Once I realized that Herschell Gordon Lewis was responsible (a name I can now recognize after almost a full year of watching nothing but horror movies) I greedily got my screenshot taker ready and sat back to indulge in some campy, B-movie "splatter fest" action. It was after this viewing of the original creation that I started to understand why I liked 2001 Maniacs so much--but we'll get to that later.
Two Thousand Maniacs has basically the same plot outline as its remake. Yankee tourists, stumble across a detour in the road leading them to a truly wacky town called Pleasant Valley population: 2000. Here they are told they are guests of honor in the town's centennial celebration and are beckoned off to a few free rooms in the hotel. Before long, we realize that the citizens of Pleasant Valley are a little too hicky for their own good and one by one kill the Yankees in ludicrous (and awesome) ways.
What's great about Two Thousand Maniacs, is that it really doesn't hold back in the slightest. Blood, guts, entrails, you name it, it's here. Each death was brilliantly laid out and executed in such a way that I got excited about what was going to happen. This is perhaps the key to loving both Two Thousand Maniacs and 2001 Maniacs. It's a strange phenomenon; on the one hand you find that you are kind of nervous and appalled at how things will turn out for these characters and on the other hand you find a little voice inside of you, rooting for the death just as loudly as the Southerners are. Does that make us horrible people? No! It means we can appreciate the fine art of a truly campy splatter movie.
When that first blood is spilt I was actually pretty stunned at what was being shown. And even though when that same woman's arm is hacked off with the axe and it looks like a mannequins arm, I was still amazed. 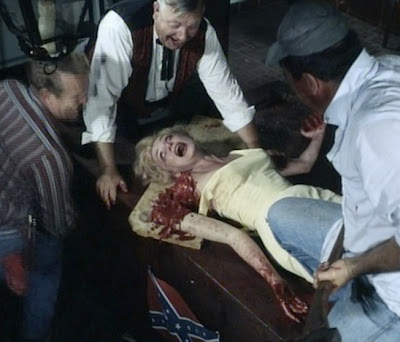 Granted, she did seem to die as soon as her arm was chopped off, which is....unexpected but still, quite a way to start the deaths off I think. After that, the outrageousness only seems to grow and the attitudes of the citizens really get more and more excited. The deaths turn into what feel like carnival games and their hootin' n' hollerin' really proves that they are in fact maniacs.
This leads me to my newly realized notion that 2001 Maniacs is one of the better remakes out there. That isn't to say that Two Thousand Maniacs wasn't a good movie to begin with. On the contrary, Two Thousand Maniacs is a GREAT movie and 2001 Maniacs takes what's great about it, and turns it into something equally entertaining and fun to watch. The creative deaths are used but improved upon. Certainly the famous horse racing scene couldn't be taken to its full potential back in 1964, but in 2005, it was turned up to the max. In fact, 2001 Maniacs changes very little about the original film, sure it makes the citizens a little more animated, adds some lesbian scenes, and throws in Robert Englund--but all of those are just adjustments, added seasoning if you will, to what was already a great dish.
What I did like a little more about Two Thousand Maniacs however, was that citizens seemed to be more like regular people. This makes the premise a bit more frightening. Sure, if demon/ ghost Southerners makes the idea of the events ever happening to yourself more impossible the movie becomes more of an entertainment experience and less of a full blown fear inducing experience. But if they appear to just be some crazy hicks however, then fear and entertainment are more prevalent as one. And while yes, the same conclusion can be made from both movies--the original still plays on the idea that the more regular looking these folks are the more terrifying the truth is.
Also, as gore and special effects restricting as 1964 may have been, the movie does some pretty incredible things. For example, my favorite death- the barrel roll scene, 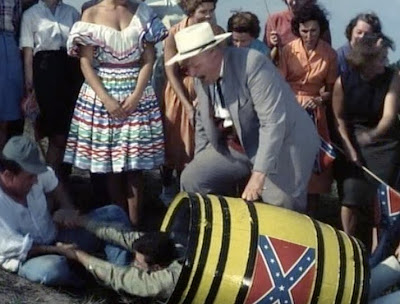 where nails are shown being hammered in, 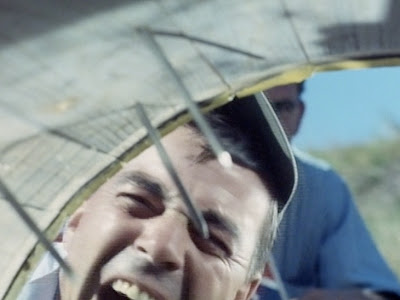 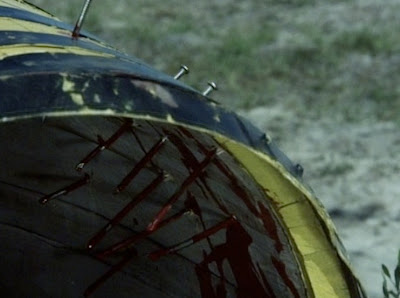 the aftermath proves to be extremely effective. 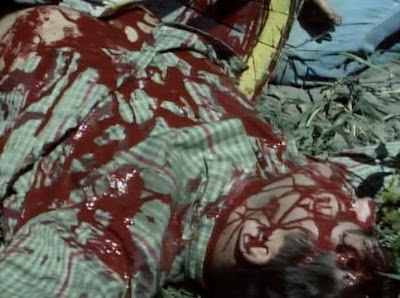 Then there is the wonderful dunk tank like scene of the rock crushing our poor crying girls body, 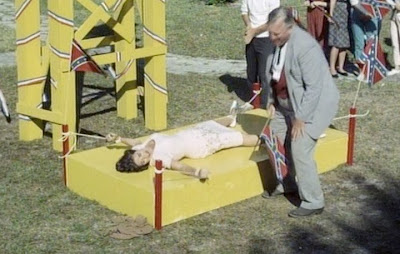 which uses the weak arms and poor aim of the citizens to simultaneously produce anxiety and eagerness within the viewer. 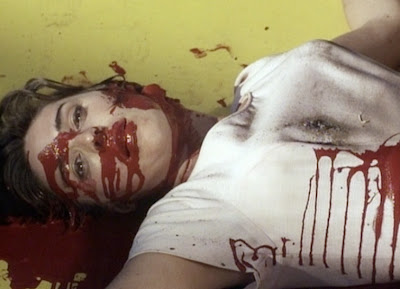 I'm not sure what else there is to say about Two Thousand Maniacs other than the fact that I completely loved it. It's a full blown wacky ride, with puddles and puddles of the most glorious red paint blood that you'll ever see. It's not what you'll expect but you'll be sure to love it. Yes, I think that about sums it up.
Posted by Andre Dumas at 9:44 AM

Thanks to John Waters, I sought out a lot of Hershel Gordon Lewis's films on VHS back in the late 80's. Waters is a big fan and had interviewed HGL for Film Comment magazine at the time. Be that as it may, I was both entranced and repulsed by his films - they are disgusting diamonds in the rough.

Have you seen HGL's "Blood Feast?"

It feels strangely transgressive to see women with beehives get brutally murdered on screen. That sort of thing wasn't supposed to start happening until the 1970s!

Classic film. If you watch Blood Feast (the first American splatter movie ever) Lewis was inventing original horror firsts as he went along.

H.G. Lewis actually wrote the awesome theme song. You should see She Devils on Wheels (if you haven't), about the biker chicks. Lewis wrote the lyrics for the theme song to that one, and they are amazing:

We are the hell-cats nobody likes
Man-eaters on motorbikes
We own this road, so you better get lost
When you hear the roar of cut-out exhaust
Bug off or you’ll find
that we have blown your mind
We know a man is made out of clay
we’re shooting clay pigeons today
Get off the road before we get crossed
Or you might get your rear-end tossed