Revisiting The House of the Devil 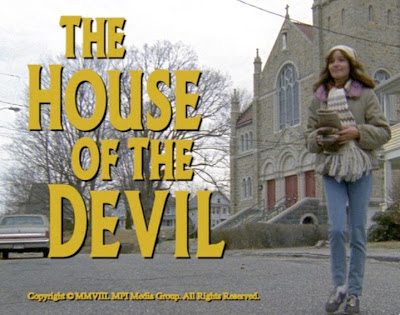 A few weeks ago Stacie Ponder asked me a very interesting question. It went something like this: Andre, why the crap haven't you done the Final Girl Film Club yet? Ok well she didn't say the crap I don't think, but I know she wanted to. The truth was I couldn't really give a decent answer except for that I was just really lazy. So in order to avoid more crapping craps, I've decided to roll out of bed and do my first ever Film Club post.
Now, I watched and reviewed The House of the Devil back in November. But that was when I was less talented and better looking. And plus I much prefer a new and refreshing view on things as opposed to simply sending Stacie a link to my old review (plus that's not really the best way to get over being lazy). So I've decided to revisit The House of the Devil thanks in large part to The House of the Devil DVD I won at All Things Horror's screening in February (it helps if you know the people putting on the screening) (just kidding I answered a question correctly to win it!) (I CAN'T HELP IT IF PEOPLE DON'T KNOW THEIR HORROR TRIVIA!)
I always get worried that when I really, really like a film it won't be as good after a second viewing. Rest assured though, it turns out that I gained an even better appreciation after the second viewing and noticed a bunch of things that I didn't before. For instance, I didn't notice last time that I was a complete moron. Seriously, someone must have roofied my water when I wasn't looking because I totally thought that Sam's roommate and her friend were the same person! I know. Ridiculous. Also I didn't notice THIS "Lost Cat" poster next to the Babysitter needed sign.... 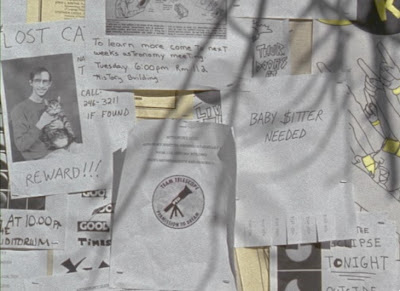 Genius.
And I sure as hell didn't notice how DEMONIC this sink faucet was. 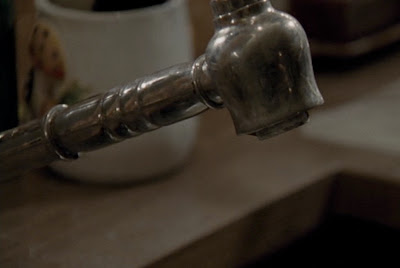 Ok that one I just made up, but it does kind of look like the Devil would have that for his sink right? I mean it IS his house after all so I'd assume he would have a hand in decorating.
Anywho. As you've probably figured out by now The House of the Devil is not for everyone. It is as what many would call it, a "slow burner". That means that it's boring for people who gage interest and entertainment by cup size and body count. In the time that most people felt bored, I felt increasingly anxious. The beauty of a slow burn type of film like this, is that it forces you to create tension in your own unique way. There are gaps in places where jump scares and loud and alarming music would be. It is because of those gaps that we start to feel more and more anxious as the film progresses. It's almost a delayed sort of fear. A great example and sort of metaphor for this is after Sam makes the telephone call from the pay phone, hangs it up and then walks away. Since the camera is focused so diligently on the phone we expect it to ring. 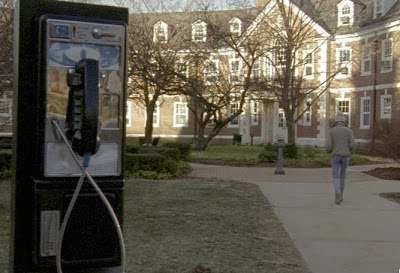 But a few seconds go by, a brief amount of time has passed and still no ring. We start to close the door on the whole pay phone ringing scenario and expect the scene to fade out when...RING! The phone does end up ringing.
The same can be said for how the absence of any real sort of straight faced fear creates tension by default. We expect it to be there and when it is not we feel like something is wrong. But that is in fact how The House of the Devil ends up creating tension. It's practically like reverse psychology. Then there is of course the simple method of giving us the title House of the Devil and having Sam be in a house....presumably of the "devil". Therefore we know that she is doomed and staying with her until she really starts to understand that fact is pretty terrifying.
All of this and more is how The House of the Devil works for me. Of course it's not like that for everyone and I respect that.
I do not however think it is a perfect movie and I was glad to see that my same dislikes returned during the second showing and surprisingly a new one that I had previously liked. I'm speaking of the ending and the reveal of the grandmother. 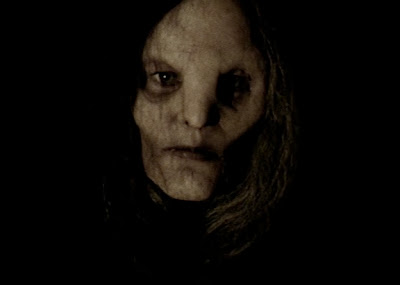 On my first viewing I said something like "Wow. I don't think I've ever seen a scarier face" and on this more recent viewing I thought, "Wow. That is kind of a lame looking face". The more I thought about it the more I realized that I hated how supernatural and sunken in her face looked. Why was she basically a walking corpse who was only missing the presence of a few maggots here and there? And P.S. she looks like a carved potato. She took away from the understated yet creepy vibe that Tom Noonan and Mary Woronov created. Sure it may have been scary when splashed across the screen in bursts of strobe light and started spitting blood, but what isn't?
And I hate to say it but I continue to be bothered by Sam's lack of consideration for the house and the mere presence of the mother. She just waltzes all over that house, doing loud things and opening up whatever door strikes her fancy. What a nosy biotch.
Also, I'm happy to report that the hair in the bathtub scene is still one of the creepier things I've seen in the past year. 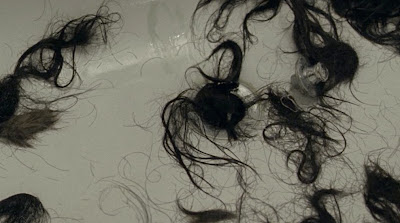 In fact, I'm actually kind of sad I left it out of my Top 10 Willies list. There's just something about that hair, and its thickness and the later scene of the mother pulling off her wig that just gets me. 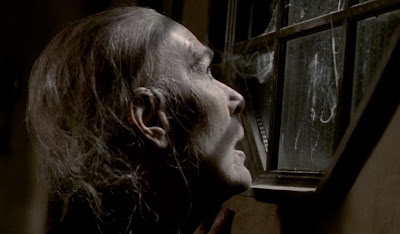 I also love the reveal of the dead family in the upstairs room. Since I was such a moron last time I don't think I made as a deep a connection to this fact. Seeing Sam uncover that picture in the closet and then thinking back to when she went into that little boy's bedroom is really one of the more chilling aspects of the film. I guess I never realized how untouched the room had been nor had I bothered to question why there was a child's room in what appeared to be current use. Oh I'm just so silly! But yes. Thinking about what happened to that family, 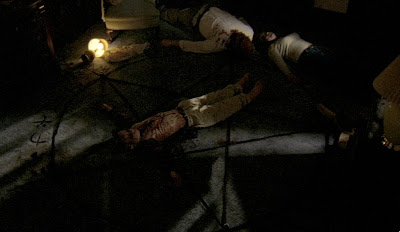 and more importantly that little boy and the fact that there were still toys out, is horrifying!
Sure it's not perfect, and by its end things start getting really out of control and hokey, but the fact remains that I am still immensely pleased with it overall. Horror fans will of course love the 80s vibe but I myself will always love that poster of the guy with the cat. Yes!
Posted by Andre Dumas at 8:44 PM

Hi Andre! I loved the 80's feel of this movie also. I really like your blog I check in almost every day.Later,adios,see ya!

I loved this movie. I too loved the 80s setting. I was so glad that they made it look like the 80s actually looked and not some send up of the decade.

The scene just before the end sequence actually made the hair on my legs stand up.

Yeah, I noticed that missing cat flyer on second viewing and had a good laugh. It would've been REALLY funny if, at some point later in the film, she walks by a different bulletin board and there's a flyer posted with the same photo, but instead the caption reads "MISSING HUMAN". :P

I saw this recently on a whim and I have to say I was very pleased with it. It was a lot of fun.

I really wanted to love this movie. I like slow-burners, In fact I had just finished editing a 70s-inspired slow burn indie film, The Commune, but this movie just didn't work for me.

The film is called House of The Devil so, you know, the cat's kinda out of the bag - let's get to it already.

**SPOILER ALERT**
I liked the buildup of the first act and really liked it up to the point where the best friend was killed - very shocking. At that point I was like - "alright now here we go!", but then the film slowed down again. The problem with the script is there is no secondary plot to keep your interest and sidetrack you until the "shocking ending" finally is revealed. It's just her waiting...wandering around in the house... for...a...long...time...

LOVE your writeup. And yes, that faucet is very menacing! I didn't notice that at first either.

I just picked this one up the other day. Been meaning to give it a look because everyone raves about the 80s feel. My buddy gave it a really good review himself, and he's generally tough on those types of films that attempt to recapture the 80s.