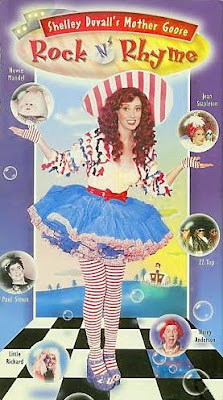 A large part of being a kid has to do with your perception. What may be silly and funny to an adult can also at the same time be quite terrifying for a child. Think of Rugrats where things like draining the bathtub and swallowing a watermelon seed became foundations for an entire episode devoted to some kind of terror. There are still in fact things to this day that I think are pretty terrifying and those things are simple like, a TV commercial or in the case of today, some kind of Disney movie. For me, it's a feeling of creepiness that I can't quite put my finger on. So, join me as I take a trip down memory lane to investigate Mother Goose Rock n' Rhyme and try to figure out just what about this gave me an off feeling.
Mother Goose Rock n' Rhyme for those that do not know, was made in 1990 as part of the early Disney Original Movie phase. It was played nonstop on Disney and for some reason it gave me the willies. Nothing was overtly scary, save for the heavy metal band that "tortured" Gordon Goose in King Cole's dungeon, rather, it was just a feeling. The same kind of eerie feeling I get when looking at the California Raisins......

I hate them! But why? Why why why? I'm not sure we will ever find out. Mother Goose Rock n' Rhyme however, provided an interesting combination of kids movie, and something your parents would only understand. Cameos galore, "old" musicians (to me when I was 5 anyways) like Paul Simon and that scary looking guy Little Richard, were characters in Mother Goose tales. And some bumbling idiot with a weird hat and Shelley Duvall relentlessly searched Rhyme Land for Mother Goose, who had disappeared without a trace.
I'm thinking one of my greatest aversions to this movie was that the majority of the male characters had long hair. Don't laugh because long haired men was probably one of my biggest fears....especially blonde long haired men! I don't know why, I just wasn't a fan OK? The opening segment sees a gang of rhyme land workers, a postman (long haired and blonde!) and a house painter, police man, and possibly a milkman. 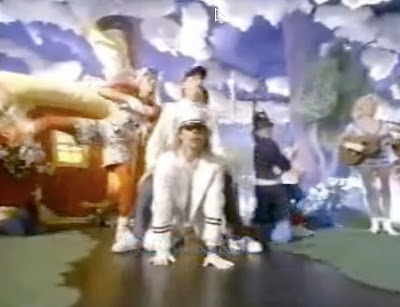 They suddenly morph into dancers as the cardboard cutout set surrounds them and a terrible "rap" songs opens the film. Oh and those creepy old lady triplets are playing their guitars. 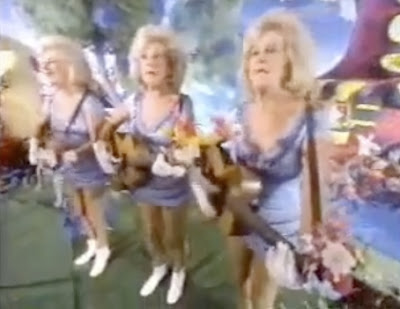 Another reason this movie may have freaked me out much more than the typical viewer was the obvious notion that it was filmed in a studio. Once again I find that I'm at a loss for words when trying to figure out why that is, but I think it has mostly to do with the fact that so much of it felt sterile. Plastic flowers, and houses that moved when somebody closed the door just gave me that feeling of fakeness and felt so very bizarre to me.
So anyway, Gordon Goose hates "rhymies" AKA Mother Gooses' characters that can only speak in rhymes, since they were written that way. Suddenly, Mother Goose is gone and Bo Peep shows up in her pink convertible, cow printed seats looking for her. 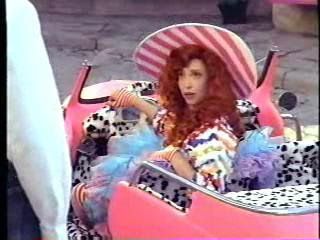 They then set across rhyme land and bump into a lot of famous people...
Cyndi Lauper as Mary and Woody Harrelson as her sheep. 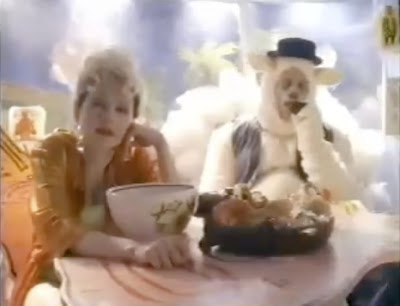 ZZ Top as the three men in a tub. 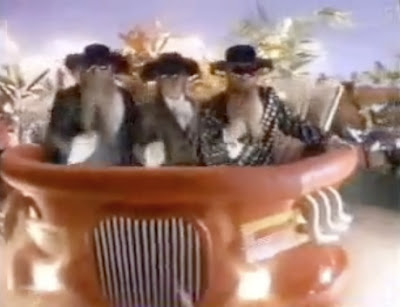 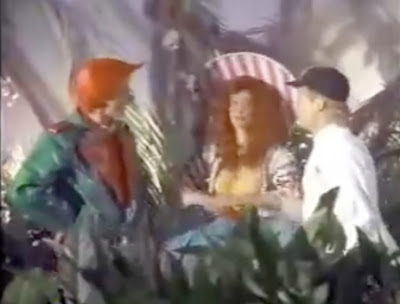 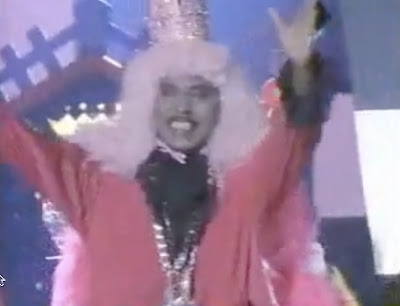 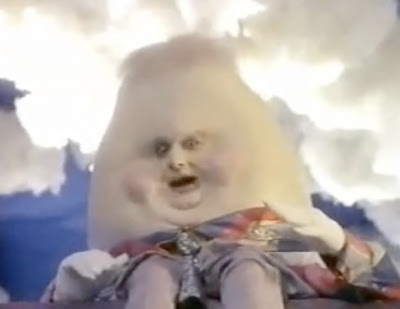 The list goes on and on.
My main beef with this movie is that people still love it. I get loving it when you're a child and what not but once you go back and watch it, your nostalgic feelings should pretty much fizzle away. I've read at least 10 "reviews" on IMDB and they all say "This is a great movie". No, it's a horrible movie that we think is great because we used to watch it all the time. It's 90s, it's cheap looking and the plot is completely thrown aside for the use of these special guest stars. The only important information Bo Peep and Gordon ever get, is from the Itsy Bitsy Spider very early on in the movie. Once they go around and talk to all the rhymies, they discover that Itsy was "right" and then they act with the information he gave them. Which means that it was pointless to go to any other rhymie to find out anything. Yes, I realize it's a kids movie and not something to really dissect but I really need people to start separating good movies from nostalgic feelings.
Here are some of the ways this movie freaked me out;
The extensive special effects of traveling. 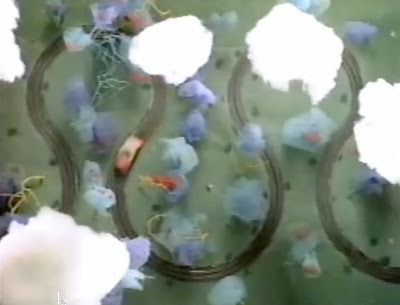 I'm pretty sure that's one of those toy car tracks where the car just zips around by itself.
Itsy's breakdance. 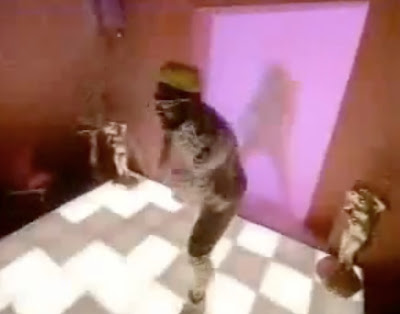 I feel like I'm suddenly being thrust into an adults only video store.
The heavy metal band in Old King Cole's dungeon. 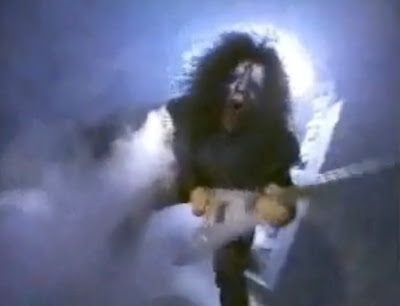 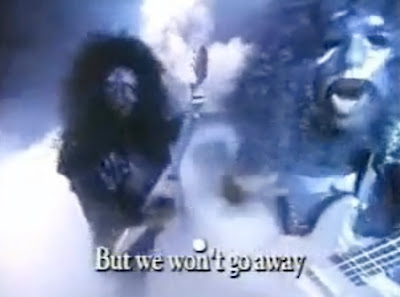 Thank god it becomes a sing along!
Tickle Monsters? 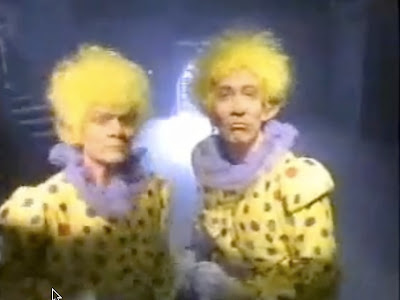 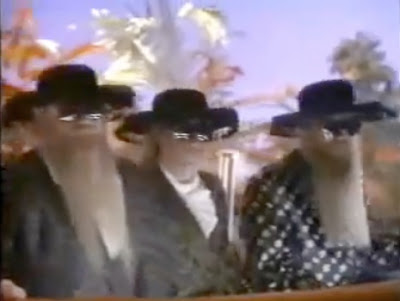 These guys have always creeped me out, due to their silent nature, long BLONDE beards and their scary Quaker Oats hats.

There's a reason Chuckie was afraid of the guy on the oatmeal box.
Miss Muffet's Curds 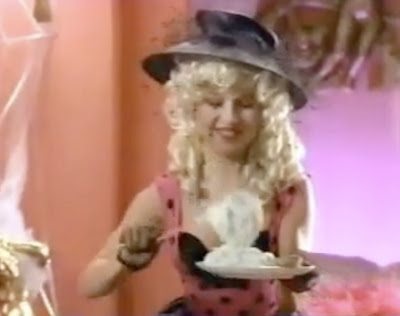 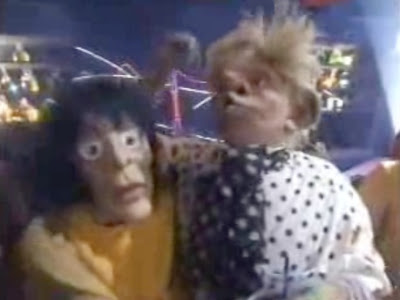 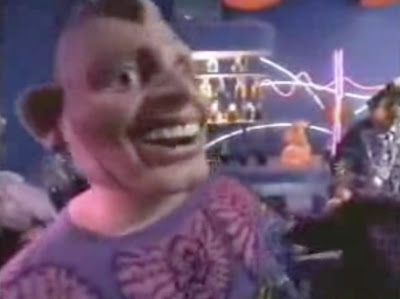 I HATE these frickin masks. Dog heads and creepy faces are just not okay. It's like being trapped in an evil funhouse nightmare.
Jumping over the moon special effects 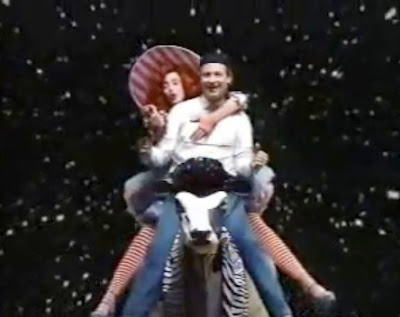 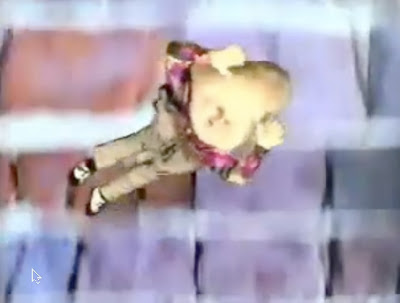 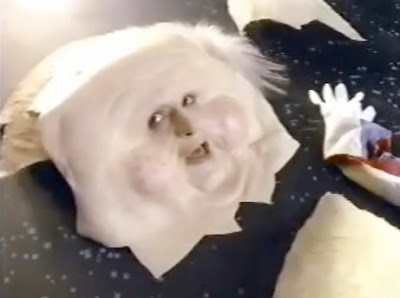 The child in the real world. 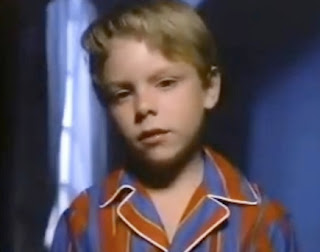 Ah doesn't it just bring you back? Hopefully many of you will remember this terrifying TV movie. Don't forget the big twist at the end where it is revealed that Gordon Goose IS a rhymie! Crazy I know. I did enjoy this nice little Who Framed Roger Rabbit homage though... 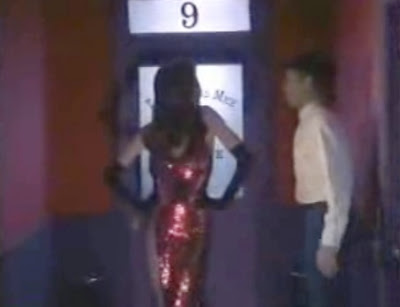 Ow ow!
By the way, you can watch the whole thing on Youtube in 9 parts.
Here's Bobby Brown as the Three Blind Mice.
Posted by Andre Dumas at 11:28 AM

Labels: A Trip Down Memory Lane

Wow, this movie looks really freaky! I have no recollection of ever watching this, but for some reason those old lady triplets with the guitars look REALLY familiar!!

This is one of my most watched childhood movies too, I think my mom taped it off the Disney Channel. I remember being a little freaked out by the heavy metal torture scene and Itsy Bitsy just never sat right with me. I'm not sure how I'd react to it today, perhaps a little embarrassed that I used to enjoy it, but there would still be that nostalgia. Kinda weird that our nostalgia concerns rapping Mother Goose characters on a cheap set, huh?

Yes, I remember this! I'll will watch it again on Youtube...thanks! To make things creepier, that kid later starred in that killer kid movie "Mikey". Maybe all of the psychedlic hoopla of the Mother Goose movie drove him to murder people. Could be.

Emily--they were also in an episode of Full House, when Joey thinks he books REM for the Smash Club but it turns out to be them and their names are like....rita, emily and marie or something. Ha.

Thanks Movie Bullstuff I thought he looked extremely familiar! Such a wacky movie I hope you get severly creeped out like I did when I watched it on youtube!

The triplets appeared on the Golden Girls:

Haha ah yes those triplets certainly made their rounds on all the TV shows eh? I never watched Golden Girls much so I only remember them from Full House. They are creepy no matter what situation it is!

I remember when the Disney channel started showing this stuff. I never got why anyone thought kids would find this sort of stuff amusing. It always struck me as dull. I guess kids did though. I assume they liked Kids, Inc. and the New Mickey Mouse Club.

OMG!!! I definitely remember them from that Full House episode! How could I have forgotten. ...that clip features some awesome dancing too!

Having watched the Full House clip, I think that we all need to agree that if anyone tries to bring back early 90s fashion as a "retro" thing, we have to stop them. By any means necessary.

Every T.V. show should have a Devo performance at some point (yesh, even C.S.I. Miami). "We are all pinheads now, Jocko Homo, we are not man, we are D-E-V-O!"

I just noticed that the California Raisin is doing a Nazi salute. Perhaps that is why they disturb you.

I'm glad I'm not the only one creeped out by the California Raisins! My brother used to like to make me scream by saying "Audrey, the California Raisins are at the door!" I was equally terrified as I was enraged that he was intentionally teasing me. Also, ZZ Top will be forever burned into my mind as "three men in a tub." I'm glad I stumbled upon this, thanks for the laugh!