Tonight on Poltergeist Scandals: What the TV People Were Really After. 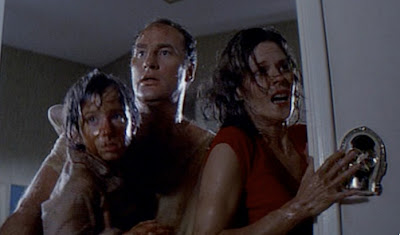 Remember that time that Carol Anne was sucked through her bedroom closet, presumably used as a beacon of light and hope for those lost souls caught traveling between two dimensions? Well recent evidence has brought a new story to the table, and it suggests that the TV People weren't really after Carol Anne at all. Hold onto your bed frames, things are about to get controversial.
You see, it all began when I was thinking about Robbie. Poor Robbie. He's ugly, he's the middle child and he doesn't eat as much as Dana 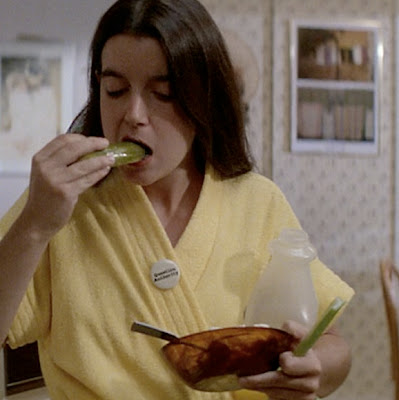 (PS why is she wearing a button on her bathrobe??) nor is he adorable and 5 years old like Carol Anne. So what could he possibly be good for? Heck, even when he thinks he's going to get all the attention by being eaten by a tree 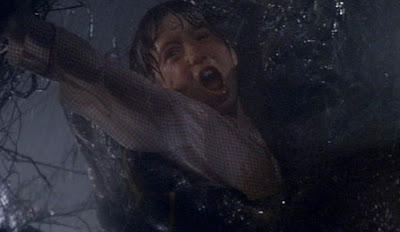 Carol Anne goes and gets herself sucked through the closet causing all the focus to be right back on her. Well this may very well be Robbie's lucky day, because according to this evidence, it is actually his fault that the TV people acted out in the first place.
Even though Robbie has nothing going for him looks wise, he does have what is perhaps the most amazing collection of Star Wars toys and memorabilia this world has ever seen. What the world really wants to know is how he in the heck he got his hands on all that good stuff when his father is a crappy real estate agent and his mother has no job. Setting aside the notion that Steven Spielberg likes to shout out to his buddy George Lucas, the question of Robbie's immense collection is quite mind boggling.
In fact this question is so mind boggling that the TV People couldn't figure it out themselves. They were so amazed, and concerned about this collection that they decided they would have to get their hands on it to see what the deal was. Yes, you guessed it---the TV people really only wanted Robbie's Star Wars toys. The only problem was, the wind to suck it out was so intense that they got Carol Anne thrown in as a bonus. And since they only wanted the Star Wars goodies, the TV people took Carol Anne and threw her aside where the Beast scooped her up. See? It makes perfect sense. That's why the TV People never came to her aide once she was connected to the Beast. They weren't afraid of the Beast--they were busy playing with the Star Wars toys.
Still don't believe me? How about this. All the other toys were sucked into the closet but were still in the room when the Freelings came back inside. The only toys missing are the Star Wars toys! Just like Carol Anne, the Star Wars stuff was obviously taken to the other side. Similarly, when the paranormal investigators go into the room and find all the bewitched toys gallivanting around--there is virtually no sign of any Star Wars stuff (save for a poster of Darth Vader, but who wants a poster?). Therefore the only sane conclusion that can be drawn is that the TV people are really big Star Wars fans. Duh.
Now let us take a look at that amazing collection. 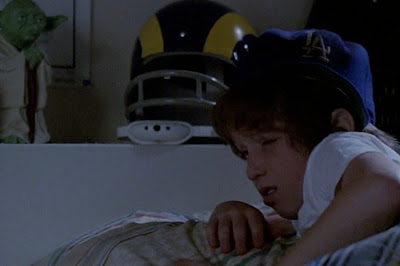 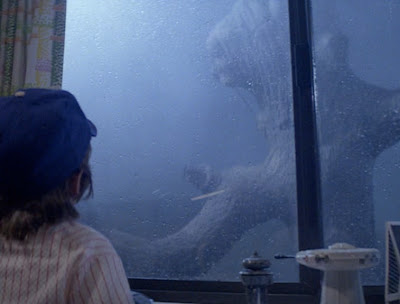 Does anyone really own the model of the probe droid at the beginning of The Empire Strikes Back? I didn't think so. Shit's rare dude! You can't see it but there's also a large Tie Fighter on that shelf. 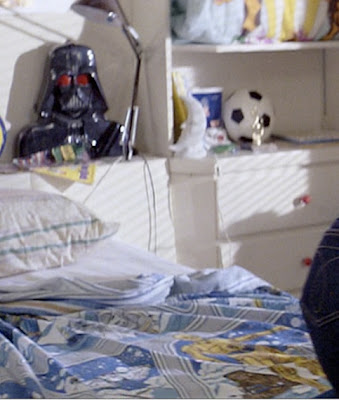 A bust of Darth Vader AND Star Wars sheets. 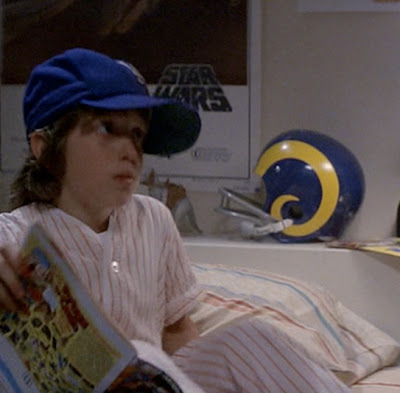 Seriously?! A Tauntaun figurine?! And a Star Wars poster of course. But for real. That Tauntaun is money. Also it disappears and reappears all the time and is replaced by an R2-D2 model that we'll see later, and also it sometimes becomes a Rubik's cube. 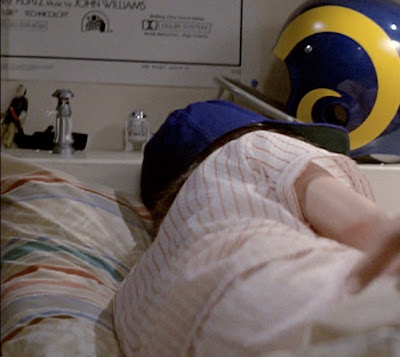 See? This shot is literally a second after the one above it, and now R2 is there. Tauntaun's work in mysterious ways... 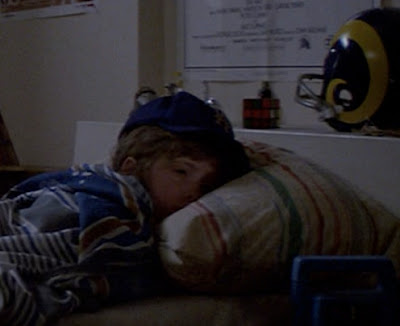 And there's the Rubik's Cube! 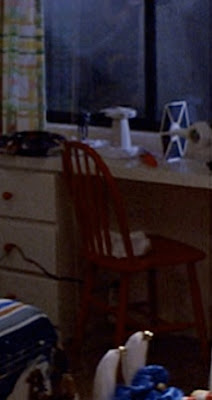 A better look at that shelf. 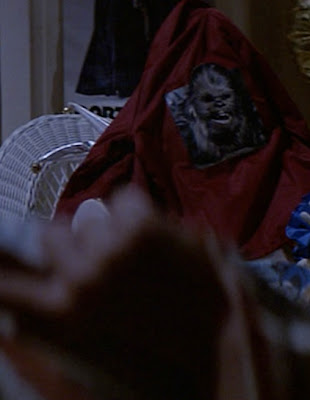 A Chewbacca jacket? I bet the TV People fought long and hard over that one. 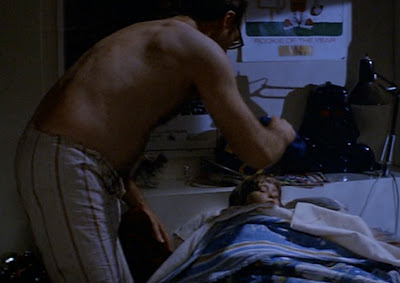 It's hard to see but there! Right by Craig T Nelson's left arm--the Tauntaun returns! 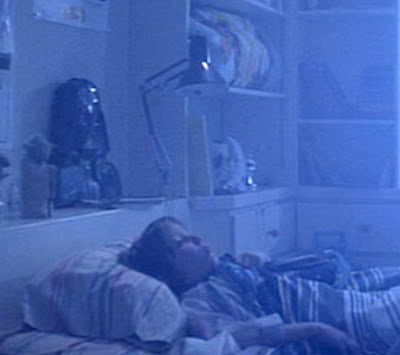 And then BOOM Yoda is back. Shit's crazy. 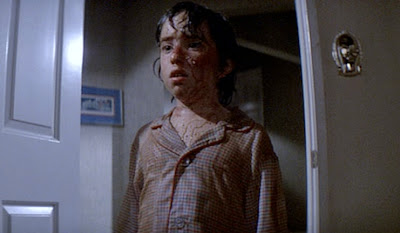 And perhaps the piece de resistance--a C3-PO light switch!
Yes quite the collection. Join me next time when we delve into the REAL reason Robbie has so many Star Wars toys to begin with.
Posted by Andre Dumas at 5:54 PM

Whoa. This movie just got real.

I think Carrie Fisher was behind all of this!

Ah Pax you're right! I had momentarily forgotten the cunning ways of that devious Carrie Fisher!

holy moly, I think you might be right about all this! Just one thing though - that's a Yoda hand puppet, not a figurine. I only know this because I still have mine, and he still has that funky rubber smell he always had :)

I think this is clearly a case of Spielberg trying to compensate for something. Obviously jealous of his friend's George success, he makes a movie where Star Wars stuff is erased. ;)

I'd never noticed that before, in all seriousness.

Thanks Michelle, hard to tell its a puppet really. Did his arms move? they look quite rigid...how fascinating!
I wish I was born in the Star Wars toy boom....sigh.

nope, just the head moves. he may as well be a figurine cuz sitting on a shelf being Yoda is all it's really good for! I wish my parents had the foresight to buy 2 of each toy and store away the packaged ones... I coulda gots me an edumacation!

This post is filled with much awesomeness. Excellent observations.

I would just like to point out that another Star Wars toy boom has been going on for the last 15 years...at least if all the crap I have laying around here is any indication. :)

If you mean toys with Jar Jar Binks then GET OUT!

Hah well actually I remember coming across an especially wonderful Wedge figurine when the restored versions came to the theaters. I wanted that so badly....and now everything has been replaced by Anakin dolls and blagh.

Great post! You just made the main page of my "Poltergeist" fan site (linked above). Another interesting question: Who really wrote "Poltergeist?"

I always knew Spielberg had something to do with this...oh; he produced. Well, there you go.

At any rate, terrific post; and in recognition of such, may I please present you with this award:

Great post, Andre! I'm a high school theatre teacher and show "Poltergeist" to my beginning classes every year, so I've seen it about a jillion times - and thought I knew everything about it. How wrong I was. Sad fact: I grew up in the age of Star Wars and sold all of my ORIGINAL action figures at the swap meet when I was about 12. Got 10 bucks. Moments I wish I could take back ...

Thanks for the award TGWD, you are too kind.

Thanks Art! I would LOVE it if my teacher showed me Poltergeist. Although we did watch it in 8th grade one time now that I recall but still....that's pretty awesome that you include it in the curriculum. Sorry about the sad fate of your Star Wars toys!

Why didn`t you girl-tion my obsession with Heather?.

This post has been up for DAYS. Clearly you are not as invested in Heather as you think.

I HAD THE PROBE DROID PLAYSET. EXCLUSIVE FROM JCPENNYS'. SURE DID. AND STILL HAVE THE YODA PUPPET, THE BLACK DARTH VADER HEAD FIGURE CASE. GOOD TIMES.

Hey,does anyone see it as more than a coincidence that the Poltergeist remake and the latest Star Wars movie are coming out within months of each other? Hmmmm!